We now turn to the major methods that sociologists use to gather the information they analyze in their research. Table 1.3 “Major Sociological Research Methods” summarizes the advantages and disadvantages of each method.

The is the most common method by which sociologists gather their data. The Gallup Poll is perhaps the best-known example of a survey and, like all surveys, gathers its data with the help of a questionnaire that is given to a group of respondents. The Gallup Poll is an example of a survey conducted by a private organization, but it typically includes only a small range of variables. It thus provides a good starting point for research but usually does not include enough variables for a full-fledged sociological study. Sociologists often do their own surveys, as does the government and many organizations in addition to Gallup. 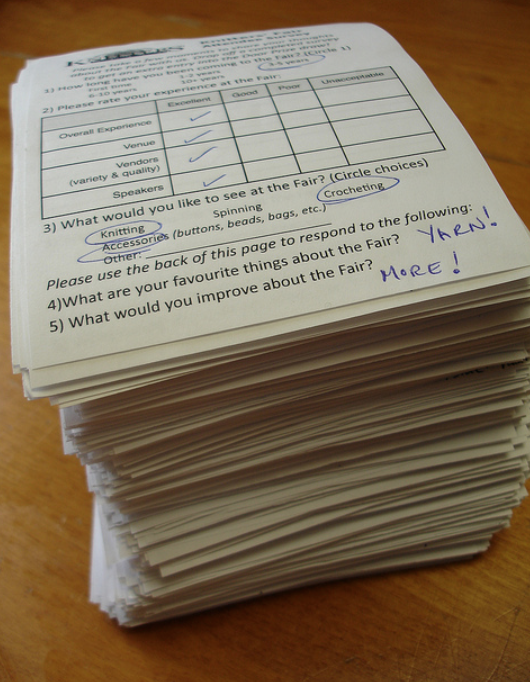 The survey is the most common research design in sociological research. Respondents either fill out questionnaires themselves or provide verbal answers to interviewers asking them the questions. The Bees – Surveys to compile – CC BY-NC 2.0.

The General Social Survey, described earlier, is an example of a face-to-face survey, in which interviewers meet with respondents to ask them questions. This type of survey can yield a lot of information, because interviewers typically will spend at least an hour asking their questions, and a high (the percentage of all people in the sample who agree to be interviewed), which is important to be able to generalize the survey’s results to the entire population. On the downside, this type of survey can be very expensive and time-consuming to conduct.

Because of these drawbacks, sociologists and other researchers have turned to telephone surveys. Most Gallup Polls are conducted over the telephone. Computers do random-digit dialing, which results in a random sample of all telephone numbers being selected. Although the response rate and the number of questions asked are both lower than in face-to-face surveys (people can just hang up the phone at the outset or let their answering machine take the call), the ease and low expense of telephone surveys are making them increasingly popular.

Mailed surveys, done by mailing questionnaires to respondents, are still used, but not as often as before. Compared with face-to-face surveys, mailed questionnaires are less expensive and time consuming but have lower response rates, because many people simply throw out the questionnaire along with other junk mail.

Whereas mailed surveys are becoming less popular, surveys done over the Internet are becoming more popular, as they can reach many people at very low expense. A major problem with Web surveys is that their results cannot necessarily be generalized to the entire population, because not everyone has access to the Internet.

are the primary form of research in the natural and physical sciences, but in the social sciences they are for the most part found only in psychology. Some sociologists still use experiments, however, and they remain a powerful tool of social research. 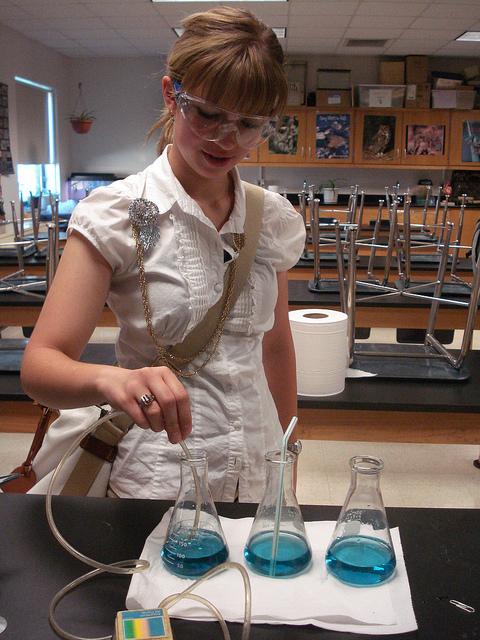 Experiments are very common in the natural and physical sciences and in sociology. A major advantage of experiments is that they are very useful for establishing cause-and-effect-relationships. biologycorner – Science Experiment – CC BY-NC 2.0.

Most experiments take place in the laboratory, which for psychologists may be a room with a one-way mirror, but some experiments occur in “the field,” or in a natural setting. In Minneapolis, Minnesota, in the early 1980s, sociologists were involved in a much-discussed field experiment sponsored by the federal government. The researchers wanted to see whether arresting men for domestic violence made it less likely that they would commit such violence again. To test this hypothesis, the researchers had police do one of the following after arriving at the scene of a domestic dispute: they either arrested the suspect, separated him from his wife or partner for several hours, or warned him to stop but did not arrest or separate him. The researchers then determined the percentage of men in each group who committed repeated domestic violence during the next 6 months and found that those who were arrested had the lowest rate of recidivism, or repeat offending (Sherman & Berk, 1984). This finding led many jurisdictions across the United States to adopt a policy of mandatory arrest for domestic violence suspects. However, replications of the Minneapolis experiment in other cities found that arrest sometimes reduced recidivism for domestic violence but also sometimes increased it, depending on which city was being studied and on certain characteristics of the suspects, including whether they were employed at the time of their arrest (Sherman, 1992).

As the Minneapolis study suggests, perhaps the most important problem with experiments is that their results are not generalizable beyond the specific subjects studied. The subjects in most psychology experiments, for example, are college students, who are not typical of average Americans: they are younger, more educated, and more likely to be middle class. Despite this problem, experiments in psychology and other social sciences have given us very valuable insights into the sources of attitudes and behavior.

Observational research, also called field research, is a staple of sociology. Sociologists have long gone into the field to observe people and social settings, and the result has been many rich descriptions and analyses of behavior in juvenile gangs, bars, urban street corners, and even whole communities.

Observational studies consist of both and . Their names describe how they differ. In participant observation, the researcher is part of the group that she or he is studying. The researcher thus spends time with the group and might even live with them for a while. Several classical sociological studies of this type exist, many of them involving people in urban neighborhoods (Liebow, 1967, 1993; Whyte, 1943). Participant researchers must try not to let their presence influence the attitudes or behavior of the people they are observing. In nonparticipant observation, the researcher observes a group of people but does not otherwise interact with them. If you went to your local shopping mall to observe, say, whether people walking with children looked happier than people without children, you would be engaging in nonparticipant observation.

A classic example of field research is Kai T. Erikson’s Everything in Its Path (1976), a study of the loss of community bonds in the aftermath of a flood in a West Virginia mining community, Buffalo Creek. The flood occurred when an artificial dam composed of mine waste gave way after days of torrential rain. The local mining company had allowed the dam to build up in violation of federal law. When it broke, 132 million gallons of water broke through and destroyed several thousand homes in seconds while killing 125 people. Some 2,500 other people were rendered instantly homeless. Erikson was called in by the lawyers representing the survivors to document the sociological effects of their loss of community, and the book he wrote remains a moving account of how the destruction of the Buffalo Creek way of life profoundly affected the daily lives of its residents. 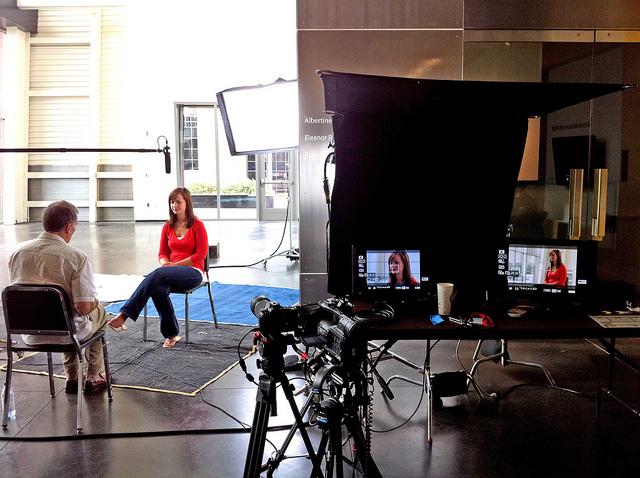 Intensive interviewing can yield in-depth information about the subjects who are interviewed, but the results of this research design cannot necessarily be generalized beyond these subjects. Fellowship of the Rich – Interview – CC BY-NC-ND 2.0.

Similar to experiments, observational studies cannot automatically be generalized to other settings or members of the population. But in many ways they provide a richer account of people’s lives than surveys do, and they remain an important method of sociological research.

Sometimes sociologists do not gather their own data but instead analyze existing data that someone else has gathered. The U.S. Census Bureau, for example, gathers data on all kinds of areas relevant to the lives of Americans, and many sociologists analyze census data on such topics as poverty, employment, and illness. Sociologists interested in crime and the legal system may analyze data from court records, while medical sociologists often analyze data from patient records at hospitals. Analysis of existing data such as these is called . Its advantage to sociologists is that someone else has already spent the time and money to gather the data. A disadvantage is that the data set being analyzed may not contain data on all the variables in which a sociologist may be interested or may contain data on variables that are not measured in ways the sociologist might prefer.

Nonprofit organizations often analyze existing data, usually gathered by government agencies, to get a better understanding of the social issue with which an organization is most concerned. They then use their analysis to help devise effective social policies and strategies for dealing with the issue. The “Learning From Other Societies” box discusses a nonprofit organization in Canada that analyzes existing data for this purpose.

Experiments – are the primary form of research in the natural and physical sciences, but in the social sciences they are for the most part found in psychology.

Non-Participant Observation – the researcher observes a group they are studying but does not participate in the group.

Participant Observation – the researcher is part of the group they are studying.

Qualitative Research – non-numerical data that is analyzed for what people say and do.

Survey – collection of data from questionnaires.

a research method involving the collection of data from questionnaires

a research method in which the the researcher holds two status, as researcher studying people in the research setting and as a participant in the group that is under study

a research method that involves the analysis of existing data