“Student Leaders Vote to Oppose 21-Only,” the headline said. In September 2010, the student government at the University of Iowa voted 16–9 to endorse the repeal of a bar ordinance in Iowa City. Adopted by the City Council the previous spring, the ordinance bans people younger than 21 from the city’s bars after 10:00 p.m.; before the ordinance was adopted, 19-and 20-year-olds were allowed in the bars. Although the ordinance was meant to reduce underage drinking, student leaders argued that it instead made it more likely that students would end up at house parties where they would “engage in substantially heavier binge drinking and are left vulnerable to not only their own mistakes but the mistakes of others.” A university sophomore agreed with this analysis: “I think if you are underage, there isn’t much else for you to do. And there is the safety issue.” Another sophomore applauded the student government vote. “I think it is very important students take a stand,” he said. “This represents that the entire UI student body is against the ordinance.” (Morelli, 2010)

The University of Iowa student government’s vote on a bar ordinance is just one illustration, though perhaps not on the most momentous issue, of democracy in action. Voting and elections are certainly a defining feature of the United States and other democracies, but voting remains only a dream in much of the world. And although the United States is one of the world’s leading democracies, many people fail to vote and otherwise participate in the political process. When the 20th century ended, Americans everywhere paused to reflect on its most significant events, including two World Wars, the Great Depression, the rise and fall of the Soviet Union, and the unleashing of the nuclear age. We thought about these and other events not only because they were historically important but also because they told us something about our society and the changes the last century brought. In all these events, our political system played a fundamental role.

This chapter discusses what sociologists and other social scientists say about politics, government and the economy. We will examine the dimensions of power and authority, the types of political systems, politics and political participation in the United States, and major aspects of war and terrorism, and the major economic systems employed throughout the world. The chapter ends with some sociological suggestions on how to achieve the Constitution’s goal of “a more perfect union.”

refers to the distribution and exercise of power within a society, and polity refers to the political institution through which power is distributed and exercised. In any society, decisions must be made regarding the allocation of resources and other matters. Except perhaps in the simplest societies, specific people and often specific organizations make these decisions. Depending on the society, they sometimes make these decisions solely to benefit themselves and other times make these decisions to benefit the society as a whole. Regardless of who benefits, a central point is this: some individuals and groups have more power than others. Because power is so essential to an understanding of politics, we begin our discussion of politics with a discussion of power.

refers to the ability to have one’s will carried out despite the resistance of others. Most of us have seen a striking example of raw power when we are driving a car and see a police car in our rearview mirror. At that particular moment, the driver of that car has enormous power over us. We make sure we strictly obey the speed limit and all other driving rules. If, alas, the police car’s lights are flashing, we stop the car, as otherwise we may be in for even bigger trouble. When the officer approaches our car, we ordinarily try to be as polite as possible and pray we do not get a ticket. When you were 16 and your parents told you to be home by midnight or else, your arrival home by this curfew again illustrated the use of power, in this case parental power. If a child in middle school gives her lunch to a bully who threatens her, that again is an example of the use of power, or, in this case, the misuse of power.

These are all vivid examples of power, but the power that social scientists study is both grander and, often, more invisible (Wrong, 1996). Much of it occurs behind the scenes, and scholars continue to debate who is wielding it and for whose benefit they wield it. Many years ago, Max Weber (1921/1978), one of the founders of sociology discussed in earlier chapters, distinguished authority as a special type of power. (or legitimate authority), Weber said, is power whose use is considered just and appropriate by those over whom the power is exercised. The example of the police car in our rearview mirrors is an example of authority. Conversely, is a form of power that is exercised over an individual, but is not considered to be legitimate. The bully who threatens their classmates into giving up their lunch has used coercion.

If traditional authority derives from custom and tradition, derives from law and is based on a belief in the legitimacy of a society’s laws and rules and in the right of leaders to act under these rules to make decisions and set policy. This form of authority is a hallmark of modern democracies, where power is given to people elected by voters, and the rules for wielding that power are usually set forth in a constitution, a charter, or another written document. Whereas traditional authority resides in an individual because of inheritance or divine designation, rational-legal authority resides in the office filled by an individual, not in the individual per se. The authority of the president of the United States thus resides in the office of the presidency, not in the individual who happens to be president. When that individual leaves office, authority transfers to the next president. This transfer is usually smooth and stable, and one of the marvels of democracy is that officeholders are replaced in elections without revolutions having to be necessary. We might not have voted for the person who wins the presidency, but we accept that person’s authority as our president when he (so far it has always been a “he”) assumes office.

Rational-legal authority helps ensure an orderly transfer of power in a time of crisis. When John F. Kennedy was assassinated in 1963, Vice President Lyndon Johnson was immediately sworn in as the next president. When Richard Nixon resigned his office in disgrace in 1974 because of his involvement in the Watergate scandal, Vice President Gerald Ford (who himself had become vice president after Spiro Agnew resigned because of financial corruption) became president. Because the U.S. Constitution provided for the transfer of power when the presidency was vacant, and because U.S. leaders and members of the public accepted the authority of the Constitution on these and so many other matters, the transfer of power in 1963 and 1974 was smooth and orderly.

stems from an individual’s extraordinary personal qualities and from that individual’s hold over followers because of these qualities. Such charismatic individuals may exercise authority over a whole society or only a specific group within a larger society. They can exercise authority for good and for bad, as this brief list of charismatic leaders indicates: Joan of Arc, Adolf Hitler, Mahatma Gandhi, Martin Luther King Jr., Jesus Christ, Muhammad, and Buddha. Each of these individuals had extraordinary personal qualities that led their followers to admire them and to follow their orders or requests for action. 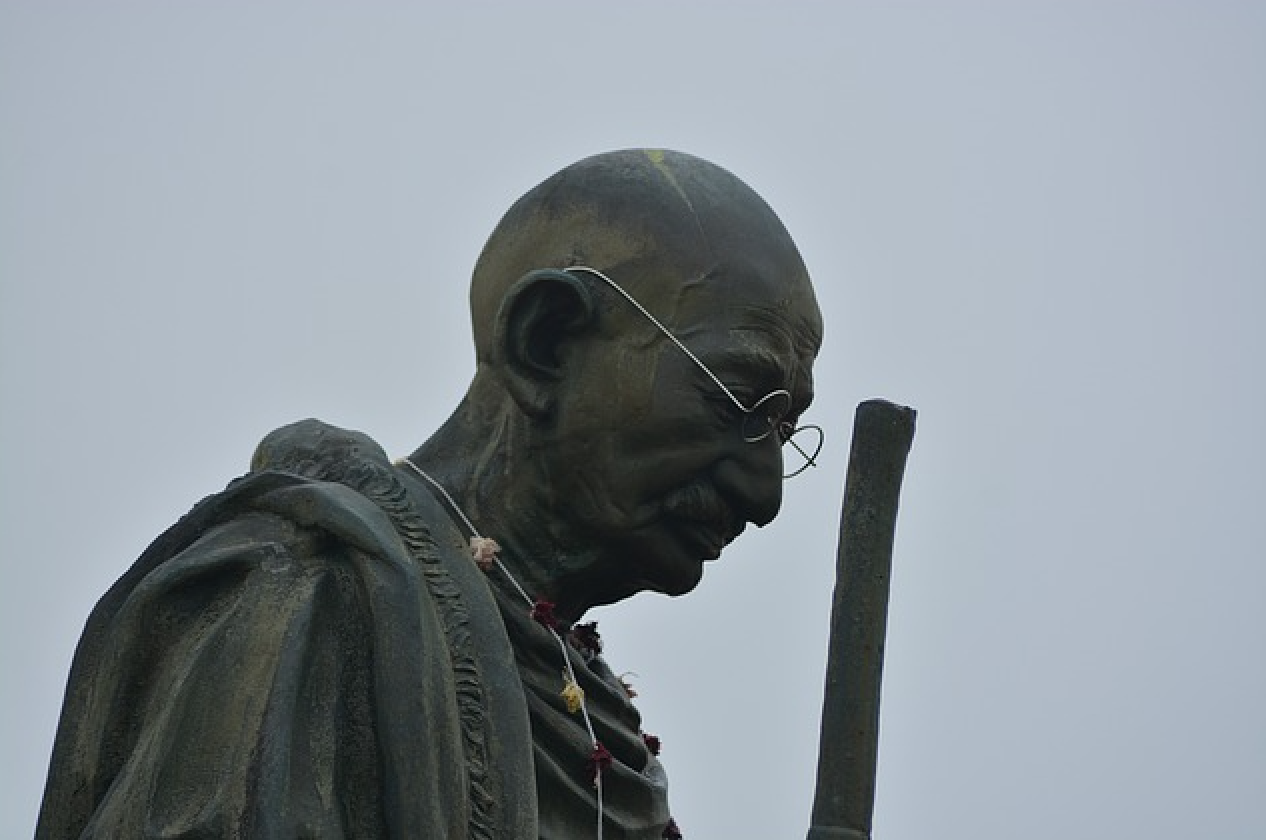 Mohandas Gandhi led the Indian Independence Movement to break free of British colonial rule. Much of Gandhi’s appeal result from his fearlessness in the face of great power and practice of nonviolent resistance. Image by naeim a from Pixabay.

Charismatic authority can reside in a person who came to a position of leadership because of traditional or rational-legal authority. Over the centuries, several kings and queens of England and other European nations were charismatic individuals as well (while some were far from charismatic). A few U.S. presidents—Washington, Lincoln, both Roosevelts, Kennedy, Reagan, and Clinton—also were charismatic, and much of their popularity stemmed from various personal qualities that attracted the public and sometimes even the press. Ronald Reagan, for example, was often called “the Teflon president,” because he was so loved by much of the public that accusations of ineptitude or malfeasance did not stick to him (Lanoue, 1988).

Weber emphasized that charismatic authority in its pure form (i.e., when authority resides in someone solely because of the person’s charisma and not because the person also has traditional or rational-legal authority) is less stable than traditional authority or rational-legal authority. The reason for this is simple: when charismatic leaders die, their authority dies as well. Although a charismatic leader’s example may continue to inspire people long after the leader dies, it is difficult for another leader to come along and command people’s devotion as intensely. After the deaths of all the charismatic leaders named in the preceding paragraph, no one came close to replacing them in the hearts and minds of their followers.

Charismatic authority – power based on an individual’s extraordinary personal qualities.

Coercion – power that is not considered to be legitimately exercised, and involves the use of force or threats.

Authority – is power that is approved by a society and considered legitimate.

Politics – the distribution and exercise of power within a society.

Power – the ability to have one’s will carried out despite the resistance of others.

Traditional authority — power that is rooted in traditional or long-standing, beliefs and practices of a society.

Continue to 11.2 Types of Political Systems

the distribution and exercise of power within a society

power that is approved by a society

power that is not considered to be legitimately exercised, and involves the use of force or threats

power that is rooted in tradition and custom

power based on written rules, such as laws

power based on an individual’s extraordinary personal qualities