“Lewistown Voters Say No to Bond for School,” the headline said. We usually associate crowded, decaying schools with urban areas, but they are also found in rural areas. In September 2010, voters in Lewistown, a small town in central Montana surrounded by prairies and mountains, defeated a bond issue for the construction of a new middle school. The new school would have replaced the town’s only junior high school. Built in 1921, the school had a host of problems, according to the news article: it did not meet accessibility standards for people with physical disabilities; plaster was routinely falling off walls and ceilings, requiring six classrooms to add suspended ceilings to prevent injuries from falling plaster; and the school was so crowded that some classes met in the gym or hallways and some students had to take tests in closets. (Hall, 2010)

Education is one of our most important social institutions. Youngsters and adolescents spend most of their weekday waking hours in school, doing homework, or participating in extracurricular activities, and many then go on to college. People everywhere care deeply about what happens in our nation’s schools, and issues about the schools ignite passions across the political spectrum. Yet, as this story about a very old school in Montana illustrates, many schools are ill equipped to prepare their students for the complex needs of today’s world.

This chapter’s discussion of education and religion begins with the development of schooling in the United States, sociological perspectives on education and education in today’s society. This discussion highlights education as a source and consequence of various social inequalities and examines several key issues affecting the nation’s schools and the schooling of its children. The chapter then presents a sociological understanding of religion by examining religion as a social institution and by sketching its history and practice throughout the world today. We then turn to the several types of religious organizations before concluding with a discussion of various aspects of religion in the United States.

is the social institution through which a society teaches its members the skills, knowledge, norms, and values they need to learn to become good, productive members of their society. As this definition makes clear, education is an important part of socialization. Education is both formal and informal. is often referred to as schooling, and as this term implies, it occurs in schools under teachers, principals, and other specially trained professionals. may occur almost anywhere, but for young children it has traditionally occurred primarily in the home, with their parents as their instructors. Day care has become an increasingly popular venue in industrial societies for young children’s instruction, and education from the early years of life is thus more formal than it used to be.

Education in early America was hardly formal. During the colonial period, the Puritans in what is now Massachusetts required parents to teach their children to read and also required larger towns to have an elementary school, where children learned reading, writing, and religion. In general, though, schooling was not required in the colonies, and only about 10% of colonial children, usually just the wealthiest, went to school (Urban, Jennings, & Wagoner, 2008).

To help unify the nation after the Revolutionary War, textbooks were written to standardize spelling and pronunciation and to instill patriotism and religious beliefs in students. At the same time, these textbooks included negative stereotypes of Native Americans and certain immigrant groups. The children going to school continued primarily to be those from wealthy families. By the mid-1800s, a call for free, compulsory education had begun, and compulsory education became widespread by the end of the century. This was an important development, as children from all social classes could now receive a free, formal education. Compulsory education was intended to further national unity and to assimilate immigrants by teaching them “American” values. It also arose because of industrialization, as an industrial economy demanded reading, writing, and math skills much more than an agricultural economy had.

Free, compulsory education, of course, applied only to primary and secondary schools. Until the mid-1900s, very few people went to college, and those who did typically came from the wealthy families. After World War II, due in large part to the Servicemen’s Readjustment Act of 1944 (also known as the G.I. Bill) which offered stipends to military veterans to cover expenses related to college, enrollments soared, and today more people are attending college than ever before.

At least two themes emerge from this brief history. One is that until very recently, formal schooling was restricted to wealthy males. This means that males who were not white and rich were excluded from formal schooling, as were virtually all females, whose education took place informally at home. Today, as we will see, race, ethnicity, social class, and gender continue to affect both educational achievement and the amount of learning occurring in schools. 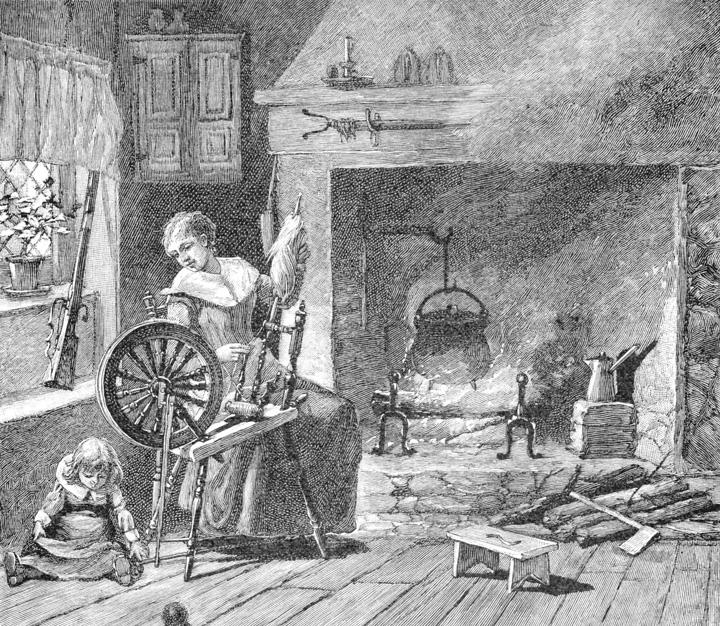 In colonial America, only about 10% of children went to school, and these children tended to come from wealthy families. After the Revolutionary War, new textbooks helped standardize spelling and pronunciation and promote patriotism and religious beliefs, but these textbooks also included negative stereotypes of Native Americans. Wikimedia Commons – public domain.

Second, although the rise of free, compulsory education was an important development, the reasons for this development trouble some critics (Bowles & Gintis, 1976; Cole, 2008). Because compulsory schooling began in part to prevent immigrants’ values from corrupting “American” values, they see its origins as smacking of ethnocentrism. They also criticize its intention to teach workers the skills they needed for the new industrial economy. Because most workers were very poor in this economy, these critics say, compulsory education served the interests of the upper class much more than it served the interests of workers. Whose interests are served by education remains an important question addressed by sociological perspectives on education, to which we now turn.

Education – a social institution through which a society teaches its members the skills, knowledge, norms, and values they need to learn to become good, productive members of their society.

Formal education – often referred to as schooling, and as this term implies, it occurs in schools under teachers, principals, and other specially trained professionals.

Informal education – may occur almost anywhere, but for young children it has traditionally occurred primarily in the home, with their parents as their instructors.

Continue to 13.2 Sociological Perspectives on Education

a social institution through which a society teaches its members the skills, knowledge, norms, and values they need to learn to become good, productive members of their society

often referred to as schooling, and as this term implies, it occurs in schools under teachers, principals and other specially trained professionals

may occur almost anywhere, but for young children it has traditionally occurred primarily in the home, with their parents as their instructors