The individual explanation is called (McClelland, 1967; Rostow, 1990). According to this theory, rich nations became wealthy because early on they were able to develop the “correct” beliefs, values, and practices—in short, the correct culture—for trade, industrialization, and rapid economic growth to occur. These cultural traits include a willingness to work hard, to abandon tradition in favor of new ways of thinking and doing things, to take risks and to adopt a future orientation rather than one focused on maintaining present conditions.

Modernization theory has direct relevance for the industrialization of Western Europe. According to the theory, Western European nations began to emerge several centuries ago as economic powers because their populations adopted the kinds of values and practices just listed. Max Weber (1904/1958), one of the founders of sociology, wrote that Western Europe was able to do this because the Protestant Reformation diminished the traditional distrust of the Catholic Church for material success and social and economic change. The new Protestant ethic that Western Europeans adopted stressed the importance of hard work and material success in one’s lifetime rather than the Church’s traditional emphasis on rewards in an afterlife.

According to modernization theory, nations in other parts of the world never became wealthy and remain poor today because they never developed the appropriate values and practices and lag behind technologically. Instead, they continued to follow traditional beliefs and practices that stymied industrial development and modernization. 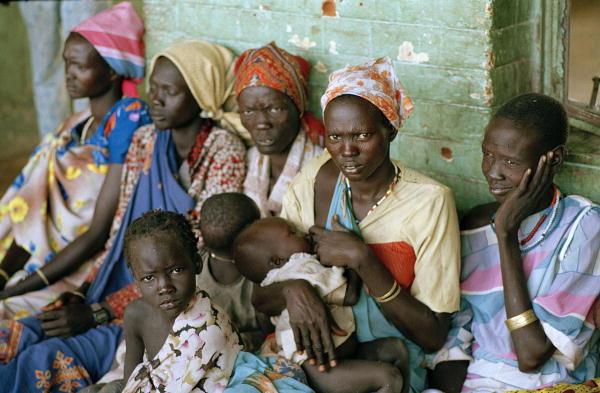 According to modernization theory, poor nations are poor because their people never developed values such as an emphasis on hard work. United Nations Photo – OLS Brings Support to Strained Medical Services – CC BY-NC-ND 2.0.

Modernization theory has much in common with the discussed in Chapter 7 “Social Stratification”. It attributes the poverty of poor nations to their failure to develop the “proper” beliefs, values, and practices necessary for economic success both at the beginning of industrialization during the 19th century and in the two centuries that have since transpired. Because modernization theory implies that the adoption of these cultural attributes and new technologies serves to aid nations in economic development, thus leading to growth and stability, it falls into the functionalist explanation of stratification.

As should be clear, modernization theory has direct implications for strategies to reduce global poverty. The theory implies that people in poor nations must adopt beliefs, values, and practices in common with western nations to succeed economically. If they do not do so, they will prevent themselves from profiting as fully as possible from economic opportunities.

The structural explanation for global stratification is called . Not surprisingly, this theory’s views sharply challenge modernization theory’s assumptions (Packenham, 1992). Whereas modernization theory attributes global stratification to the “wrong” cultural values and practices in poor nations, dependency theory blames global stratification on the exploitation of these nations by high-income nations. According to this view, low-income nations never got the chance to pursue economic growth because early on they were conquered and colonized by European ones. The European nations stole the poor nations’ resources and either enslaved their populations or used them as cheap labor. They installed their own governments and often prevented the local populace from getting a good education. As a result, the colonized nations were unable to develop a professional and business class that would have enabled them to enter the industrial age and to otherwise develop their economies. Along the way, wealthy nations sold their own goods to colonized nations and forced them to run up enormous debt that continues to amount today. All of these factors created a dependent relationship between colonizing and colonized countries. Because dependency theory implies that poor nations remain poor because of lack of opportunity owing to exploitation by wealthy nations, it falls into the conflict perspective on stratification.

Despite decolonization, dependency continues. Huge multinational corporations continue to exploit the labor and resources of the poorest nations, say dependency theorists. These corporations run sweatshops in many nations, in which workers toil in inhumane conditions at extremely low wages (Sluiter, 2009). Often the corporations work hand-in-hand with corrupt officials in the poor nations to strengthen their economic stake in the countries. An example of this dynamic occurred during the 1990s in the West African country of Nigeria, where the Royal Dutch/Shell oil company at the time was pumping half of that nation’s oil. Activists in southern Nigeria began to claim that Shell’s oil drilling was destroying their land and that Shell was paying them too little for their oil. In response to their protests, the government sent in police at Shell’s request, with Shell paying some of the police costs. The police put down the activists’ dissent by destroying several villages and killing 2,000 people (Lewis, 1996).

Dependency theory also has direct implications for strategies to reduce global poverty. Very simply, the theory implies that wealthy nations and multinational corporations must stop exploiting the resources of poor nations. Until that happens, poor nations will be unable to develop their natural resources and to enter the industrial age.

Which makes more sense, modernization theory or dependency theory? As with many theories, both make sense to some degree, but both have their faults. Modernization theory places too much blame on poor nations for their own poverty and ignores the long history of exploitation of poor nations by rich nations and multinational corporations alike. For its part, dependency theory cannot explain why some of the poorest countries are poor even though they were never colonies; neither can it explain why some former colonies such as Hong Kong have been able to attain enough economic growth to leave the rank of the poorest nations. Together, both theories help us understand the reasons for global stratification, but most sociologists would probably favor dependency theory because of its emphasis on structural factors in the world’s historic and current economy. The following case study helps to exemplify this debate.

In January 2010, an earthquake with a magnitude of 7.0 devastated Haiti, an island nation in the Caribbean and one of the poorest countries in the world. The quake reportedly killed more than 200,000 people, about 2.5% of Haiti’s population, injured 300,000, and left 1 million homeless. Because Haiti had ramshackle buildings, a weak infrastructure, and inadequate public services, many more people died or otherwise suffered from this earthquake than from earthquakes of similar magnitude in wealthier countries. 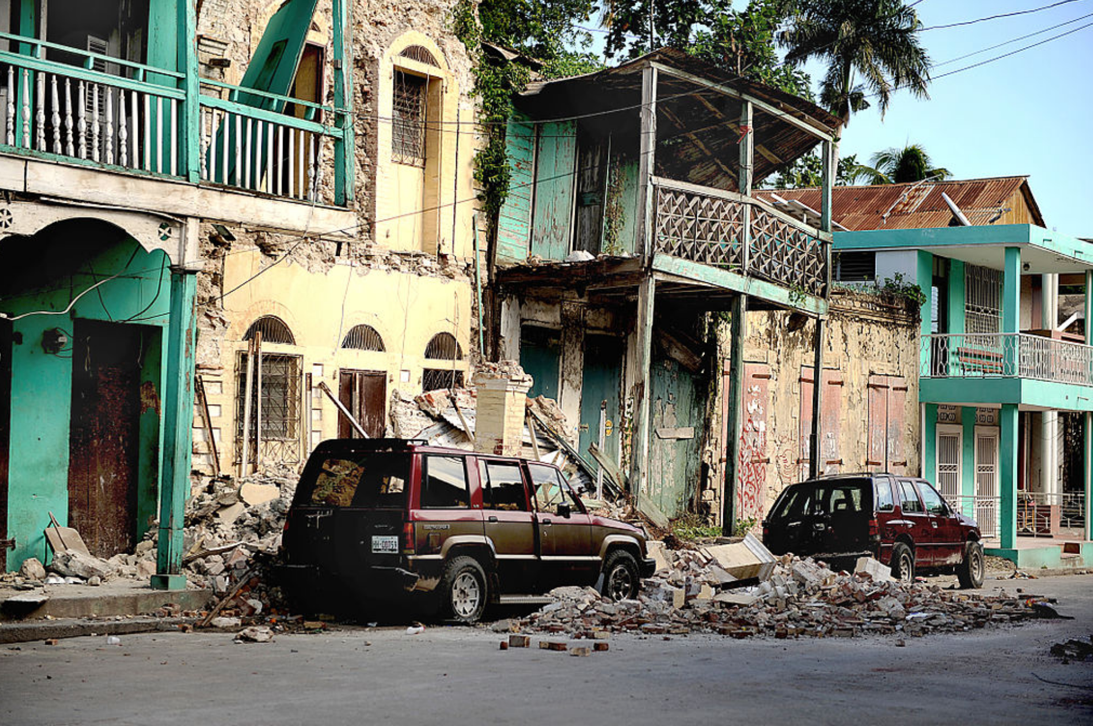 Buildings in Jacmel, Haiti, that were destroyed by the earthquake that hit the region Jan. 12, 2010. Wikimedia Common – Public Domain

In the aftermath of this natural disaster, a flurry of news articles and op-ed columns discussed why Haiti had been so poor before the earthquake despite efforts by thousands of international agencies during the past few decades. The contrasting positions presented in these articles reflected the views of the modernization and dependency theories presented in the text, and they illustrate the complexity of understanding global poverty.

Reflecting the views of modernization theory, some observers attributed Haiti’s situation to a culture of poverty. They noted that Haiti shares an island with the Dominican Republic, which is not nearly as poor as Haiti. Beyond sharing a general location and climate, the two nations also have similar histories of colonialism and governmental corruption. Given these similarities, why, then, was Haiti much poorer than the Dominican Republic?

To answer this question, Jonah Goldberg, a Los Angeles Times columnist, reasoned, “Haiti’s problems in large part boil down to a culture of poverty. Haitians do not lack the desire to make their lives better, nor do they reject hard work. But what they sorely lack is a legal, social and intellectual culture that favors economic growth and entrepreneurialism” (Goldberg, 2010, p. 9A). Western nations, he continued, must do more than provide aid to Haiti and other poor nations, as they must also teach them “how to stop being poor.” People in these nations, he said, must learn the concept of entrepreneurialism (the development and practice of a business), and they must also learn how to be entrepreneurs.

Reflecting the views of dependency theory, other observers attributed Haiti’s deep poverty to its history of colonialism, which puts it at a severe disadvantage even compared to other formerly colonized nations. Michele Wucker, executive director of the World Policy Institute, and Ben Macintyre, a columnist for The Times of London, both wrote that Haiti was a rich slave colony of France before a bloody revolution won Haitians their independence in 1804. The new nation’s economy then suffered for two reasons. First, the revolution destroyed much of the country’s agriculture and infrastructure. Second, France used ships to block Haitian trade and required Haiti to pay a huge indemnity, equal to about $13 billion in today’s dollars, to restore normal trade and diplomatic relations. Haiti had to take out huge loans from Western nations’ banks at very high interest rates to do so. The consequence for Haiti was devastating, wrote Macintyre (2010, p. 30):

Weighed down by this financial burden, Haiti was born almost bankrupt. In 1900 some 80 percent of the national budget was still being swallowed up by debt repayments. Money that might have been spent on building a stable economy went to foreign bankers….The debt was not finally paid off until 1947. By then, Haiti’s economy was hopelessly distorted, its land deforested, mired in poverty, politically and economically unstable, prey equally to the caprice of nature and the depredations of autocrats.

Where does the truth lie? Is Haiti’s poverty today due more to its culture or more to its history of colonialism and imperialism? People who favor modernization theory would answer culture, and those who favor dependency theory would answer colonialism and imperialism. In the end, both sets of factors probably matter. The debate over Haiti’s poverty shows that the experience of other societies can illuminate theories of global stratification and, in turn, help us understand which types of strategies hold the most potential for helping poor nations.

Dependency Theory – a theory which explains global stratification as rooted in colonization and exploitation of the resources and people of colonized countries to the benefit of colonizing countries, resulting in the dependency of low-income nations on high-income nations.

Modernization Theory — a theory which explains global stratification resulting from the degree to which a country has adopted “modern” cultural values and practices, along with new technologies.

a theory which explains global stratification resulting from the degree to which a country has adopted “modern” cultural values and practices, along with new technologies

a theory which explains global stratification as rooted in colonization and exploitation of the resources and people of colonized countries to the benefit of colonizing countries, resulting in the dependency of low-income nations on high-income nations