The study of population goes hand-in-hand with the examination of global stratification and social stratification, as population traits can be both a cause and reflection of the position of a group or society within a stratification system. Take for instance the state of Michigan. Michigan’s population is shrinking. This reality stems from the fact that the birth rate today is 21% lower than its 1990 rate, and we now have 22,500 fewer fifth graders than ninth graders. Another reason for the population decline is that for the past several decades many more people had been moving out of Michigan than moving in. Because many of those moving out are young, college-educated adults, they were taking with them hundreds of millions of dollars in paychecks that would have bolstered Michigan’s economy and tax revenue base. They were also leaving behind empty houses and apartments that are further depressing the state’s real estate market. The population decline has already forced many schools to close, with additional closings likely, and it is also increasing the percentage of Michigan residents in their older years who would need additional state services. The population decline has been especially severe in Detroit but has also been occurring in smaller cities and towns. (French & Wilkinson, 2009; Dzwonkowski, 2010) 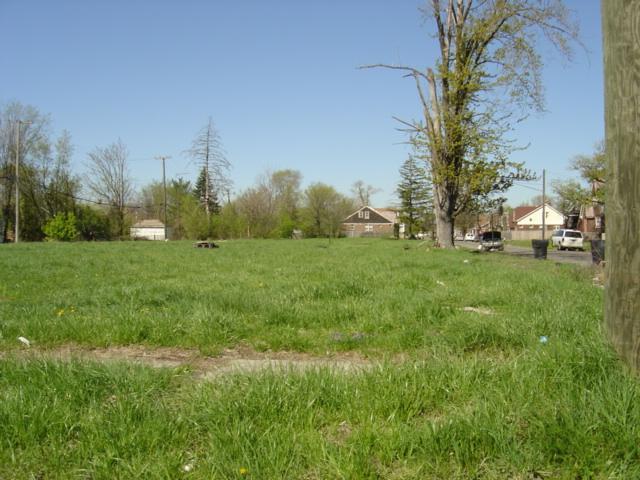 Many neighborhoods in Detroit have been partially abandoned due to the migration of people out of Michigan. Wikimedia Commons – public domain.

As this data from Michigan reminds us, population decline can have weighty consequences throughout a region. Among other consequences, Michigan’s population decline has affected its economy, educational system, and services for its older residents. The opposite is true in many low- and middle-income nations, where population growth is the dominant pattern, resulting in large child populations which stretch inadequate resources even further. At the global level, population decline occurring in one world region may coincide with population growth in another region, sparking previously unseen patterns of migration across international boundary lines. These few examples and all of the associated issues demonstrate the importance of the study of population in relation to stratification. The study of population is so significant that it occupies a special subfield within sociology called . To be more precise, demography is the study of changes in the size and composition of population. It encompasses several concepts: fertility and birth rates, mortality and death rates, and migration (Weeks, 2012). Let’s look at each of these briefly.

A third measure is the , or the average number of children a woman is expected to have in her lifetime. This measure often appears in the news media and is more easily understood by the public than either of the first two measures. In 2017, the estimated U.S. total fertility rate was about 1.87, meaning that currently the average woman in the U.S. is expected to have 1.87 children in her lifetime (Central Intelligence Agency). When a country’s total fertility rate is 2.1 children per woman, it is said to have reached . A replacement level fertility is the level of fertility at which a population exactly replaces itself from one generation to the next (e.g., 2 parents have 2 children, when the parents die, the children replace them, resulting in zero population growth). While there are other factors to consider (such as mortality and migration rates) when total fertility rates rise above 2.1, a population will naturally grow, and a total fertility rate below 2.1 indicates that a population overall will shrink. 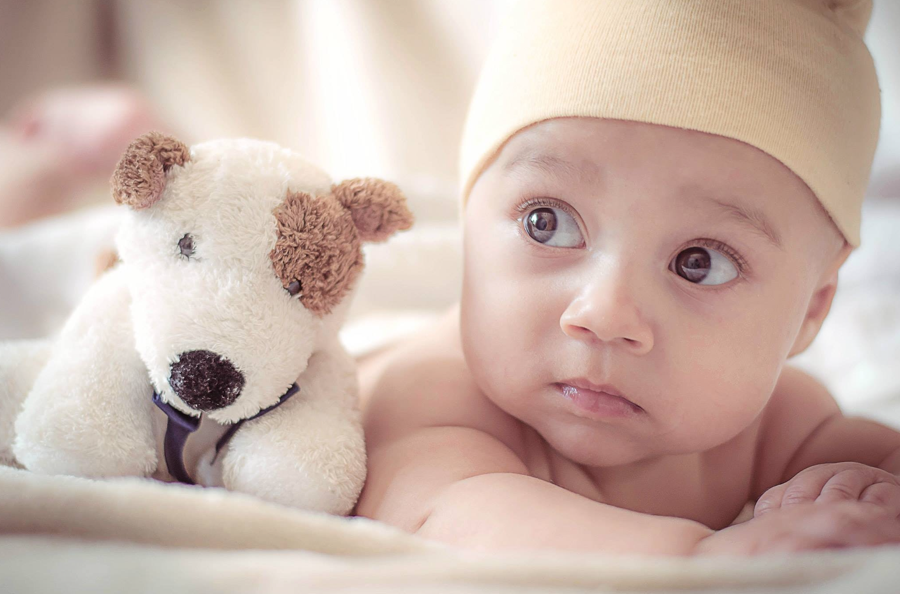 As Figure 8.6 “U.S. Total Fertility Rate, 1933–2016” indicates, the U.S. total fertility rate has changed a lot over time. The rate in the early 1930’s during the height of the Great Depression was similar to today’s rates. However, in the early years of WWII (1940’s), the rate started to climb, reaching roughly 3.7 in the 1950’s post-war era, before it began to decline in the mid-1960’s. While there has been minor fluctuation, the U.S. total fertility rate has remained fairly steady since the 1970’s. 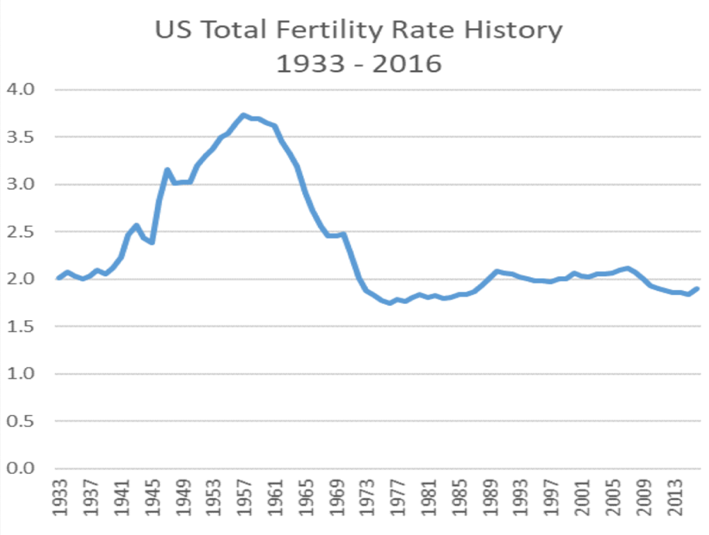 In addition to the fertility rate varying across time within a nation, it can also vary across groups. The variance reflects many different factors, including such things as the economic, educational and employment status of a group, in addition to other factors such as recency of immigration and subcultural attributes, such as the norm associated with age of marriage for women. As evidenced below in Figure 8.7 “Race, Ethnicity and U.S. Total Fertility rates, 2016,” there are some slight differences between total fertility rates for different racial-ethnic groups in the U.S., however, all the rates are currently below replacement level fertility.

First, low-income nations usually have large agricultural sectors. In agricultural societies, children are an important economic resource, as a family will be more productive if it has more children. This means that families will ordinarily try to have as many children as possible. Second, infant and child mortality rates are high in these nations. Because parents realize that one or more of their children may die before adulthood, they have more children to compensate for the anticipated deaths. A third reason is that many parents in low-income nations prefer sons to daughters, and, if a daughter is born, they may “try again” for a son. Fourth, traditional gender roles are often very strong in poor nations, and these roles include the belief that women should be wives and mothers above all, thus status for women is associated with childbearing. Finally, contraception is often less accessible in low-income nations. Without contraception, many more pregnancies and births certainly occur. For all of these reasons, then, fertility is much higher in low-income than in high-income nations.

is the flip side of fertility and refers to the number of deaths. Demographers measure it with the , the number of deaths for every 1,000 people in a population in a given year. To determine the crude death rate, the number of deaths is divided by the population size, and this result is then multiplied by 1,000. In 2017 the United States had an estimated crude death rate of 8.2 deaths for every 1,000 persons (approximately 2.7 million deaths in 2017). We call this a “crude” death rate because the denominator, population size, consists of the total population and does not take its age distribution into account. All things equal, a society with a higher proportion of older people should have a higher crude death rate, however, because low-income nations have large child populations coupled with high infant and child mortality, the crude death rates of nations today fall within a narrow range. For instance, some countries in Western and Eastern Europe, such as Bulgaria, Romania and Germany, which have crude death rates of 15, 13 and 11, respectively, are statistically similar to low-income countries in sub-Saharan Africa. For instance, Sierra Leone, the Central African Republic, Chad and Lesotho each have a crude death rate of 13 (Population Reference Bureau, 2017).

Another demographic concept is , the movement of people into and out of specific regions. Since the dawn of human history, people have migrated in search of a better life, and many have been forced to migrate by ethnic conflict or the slave trade.

Several classifications of migration exist. When people move into a region, we call it ; when they move out of a region, we call it . The immigration rate is the number of people moving into a region for every 1,000 people in the region, while the emigration rate is the number of people moving from the region for every 1,000 people. The difference between the two is the (immigration minus emigration). Recalling the news story about Michigan earlier in this section, Michigan has had a net migration of less than zero, as its emigration has been greater than its immigration.

Migration can also be either domestic or international in scope. happens within a country’s national borders, as when the great migration of African Americans from the South into northern cities occurred during the first half of the 20th century. happens across national borders. When international immigration is heavy, as it has been into the United States and Western Europe in the last few decades, the effect on population growth and other aspects of national life can be significant. Domestic migration can also have a large impact.

Crude Birth Rate – The number of live births for every 1,000 people in a population in a given year.

Crude Death Rate – The number of deaths for every 1,000 people in a population in a given year.

Demography – the study of the changes in the size and composition of population.

Domestic Migration – migration that occurs within a country’s borders.

Emigration– the number of people moving out of a region for every 1,000 people in the region.

Fertility – the number of live births.

Immigration – the number of people moving into a region for every 1,000 people in the region.

Migration – the movement of people into and out of specific regions.

Mortality – the number of deaths.

Net Migration Rate – The rate of immigration minus the rate of emigration.

Replacement Level Fertility – The level of fertility at which a population exactly replaces itself from one generation to the next.

Total Fertility Rate – the average number of children a woman is expected to have in her lifetime.

Continue to 8.5 Population Growth and Decline

the number of live births

the number of live births for every 1,000 people in a population in a given year

the number of deaths

the number of deaths for every 1,000 people in a population in a given year

the movement of people into and out of specific regions

the movement of people into a new region or nation

the number of people moving out of a region for every 1,000 people in the region

migration that occurs within a country’s borders

migration that occurs across national borders