Let’s examine racial and ethnic stereotypes and prejudice further and then turn to discrimination. Prejudice and discrimination are often confused, but the basic difference between them is this: prejudice is an attitude, while discrimination is a behavior. More specifically, racial and ethnic refers to a set of negative attitudes, beliefs, and judgments about groups, and about individual members of those groups, because of their race and/or ethnicity. A closely related concept is , or the belief that certain racial or ethnic groups are biologically or culturally inferior to one’s own. Prejudice and racism are often based on racial and ethnic , or simplified, mistaken generalizations about people because of their race and/or ethnicity, which are not tested against reality and which are learned second-hand. Stereotypes may be positive (usually about one’s in-group, such as when women suggest they are less likely to complain about physical pain) but are often negative (usually toward out-groups, such as when members of a dominant racial group suggest that a subordinate racial group is less intelligent or lazy). In either case, the stereotype is a generalization that doesn’t take individual differences into account. The above indicates that stereotypes arise to disparage and justify the subordination of minority groups. New stereotypes are, in fact, rarely created; rather they are recycled from subordinate groups that have assimilated into society and are reused to describe newly subordinate groups, a phenomenon known as stereotype interchangeability. (OpenStax, Sociology 2e, Attribution International (CC BY 4.0); download for free at http://cnx.org/contents/02040312-72c8-441e-a685-20e9333f3e1d@10.1).

An example of stereotype interchangeability can be seen in comparing stereotypes of East Asians in the 1800’s with stereotypes of Hispanic and Muslim Americans today. The term “Yellow Peril” from the late 1800’s was based upon the belief that East Asian immigrants were culturally and politically tied to their countries of origin and unable to assimilate, and thus their immigration in large numbers to the U.S. would not only result in cultural competition with Anglo-Americans but would inevitably destroy their way of life. As Asian Americans experienced upward mobility in the U.S., the perception of this group has changed. Rather than being perceived as threatening and unassimilable, Asian Americans are now stereotyped as a model minority, characterized by high levels of education and prominence in white-collar jobs. The old “Yellow Peril” stereotype has been recycled, and in the 2000’s we have seen a rise in similar stereotypes, such as the perception that Hispanic Americans are an invading force here to change the very nature of U.S. culture, and of Muslim Americans who are discussed as being closely tied to their countries of origin and working to impose their religious belief and political structures on unsuspecting U.S. communities.

Where do racial and ethnic prejudices come from? Why are some people more prejudiced than others? Scholars have tried to answer these questions at least since the 1940s, when the horrors of Nazism were still fresh in people’s minds. Theories of prejudice fall into two camps, social-psychological and sociological. We will look at social-psychological explanations first and then turn to sociological explanations. We will also discuss distorted mass media treatment of various racial and ethnic groups.

Another early and still popular social-psychological explanation is called (Dollard, Doob, Miller, Mowrer, & Sears, 1939). In this view, individuals who experience various kinds of problems become frustrated and blame their troubles on low status groups (e.g., racial, ethnic, and religious minorities). These minorities are thus scapegoats for the real sources of people’s misfortunes. 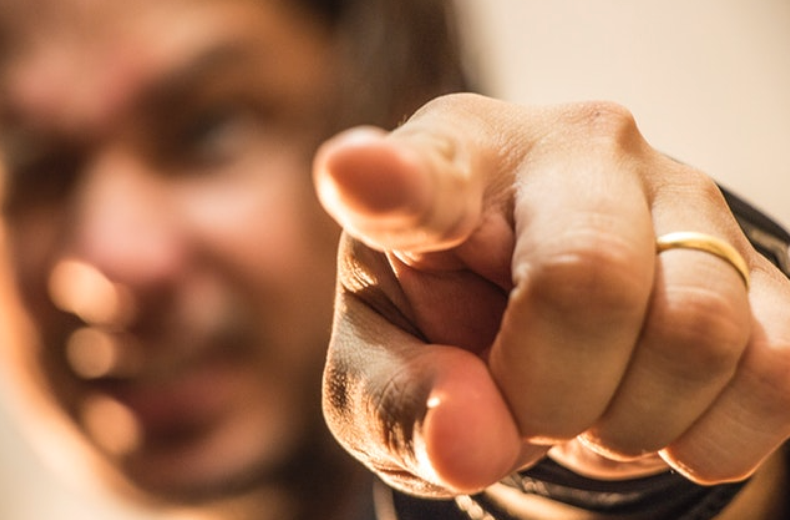 One theory which explains prejudice is the scapegoat theory, which states people who have troubled lives blame their troubles on members of low status groups. Photo by Rodolpho Zanardo from Pexels

In the real world, scapegoating at a mass level has been quite common. In medieval Europe, Jews were commonly blamed and persecuted when economic conditions were bad or when war efforts were failing. After the bubonic plague broke out in 1348 and eventually killed more than one-third of all Europeans, Jews were blamed either for deliberately spreading the plague or for angering God because they were not Christian. When Germany suffered economic hardship after World War I, Jews again proved a convenient scapegoat, and anti-Semitism helped fuel the rise of Hitler and Nazism (Litvinoff, 1988). Similarly, in the U.S., nativism (anti-immigrant sentiment) and xenophobia (fear and hatred of outgroups) commonly arise during periods of significant social change and economic decline.

A theory that piggybacks on social learning theory is . While social learning theory helps us to understand the relationship between socialization and prejudice, the view of contact theorists is that prejudice arises in societies where institutional segregation and social inequality are paired. Segregation in schools, workplaces and communities limit contact between members of diverse groups. Limited contact results in little to no opportunity to develop professional and personal relationships with members of other racial and ethnic groups, which means our chances of confronting and testing the stereotypes we hold is limited. Theorists who promote the contact theory argue that prejudice will be reduced when diverse groups are brought together within the social institutions of society (e.g., school desegregation or workplace integration). However, in order for this integration to effectively reduce prejudice, the groups being brought together must have equal status, otherwise power differentials will keep groups apart, even within integrated institutions, and only serve to perpetuate prejudice.

A third sociological explanation emphasizes economic and political competition and is commonly called (Quillian, 2006; Hughes & Tuch, 2003). In this view prejudice arises from competition over jobs and other resources and from disagreement over various political issues. When groups vie with each other over these matters, they often become hostile toward each other. Amid such hostility, it is easy to become prejudiced toward the group that threatens your economic or political standing. A popular version of this basic explanation is Susan Olzak’s (1992) , which holds that ethnic prejudice and conflict increase when two or more ethnic groups find themselves competing for jobs, housing, and other goals.

As might be clear, the competition explanation is the macro or structural equivalent of the frustration/scapegoat theory already discussed. Much of the white mob violence discussed earlier stemmed from whites’ perception that the groups they attacked threatened their jobs and other aspects of their lives. Thus, lynchings of African Americans in the South increased when the Southern economy worsened and decreased when the economy improved (Tolnay & Beck, 1995). Similarly, white mob violence against Chinese immigrants in the 1870s began after the railroad construction that employed so many Chinese immigrants slowed and the Chinese began looking for work in other industries. Whites feared that the Chinese would take jobs away from white workers and that their large supply of labor would drive down wages. Their fear prompted the passage by Congress of the Chinese Exclusion Act in 1882 that prohibited Chinese immigration (Dinnerstein & Reimers, 2009). Several nations today, including the United States, have experienced increased anti-immigrant prejudice because of the influx of immigrants and refugees onto their shores coupled with a growing gap between rich and poor and economic upheaval (Bauer, 2009). We return to anti-immigrant prejudice later in this chapter.

The Changing Nature of Prejudice

Although racial and ethnic prejudice still exists in the United States, its nature has changed during the past half-century. Studies of these changes focus on whites’ perceptions of African Americans. Back in the 1940’s and before, an era of overt racism prevailed. This racism involved blatant bigotry, firm beliefs in the need for segregation, and the view that African Americans were biologically inferior to whites. This form of racism is referred to as . In the early 1940’s, more than half of white people surveyed favored segregation in public transportation, more than two-thirds favored segregated schools and more than half thought whites should receive preference in employment hiring (Schuman, Steeh, Bobo & Krysan, 1997).

Since this time, the degree of overt racism has waned. Few believe today in the biological inferiority or superiority of racial or ethnic groups, and few favor legal segregation. As just one example, Figure 9.2 “Changes in Support by Whites for Segregated Housing, 1972 – 1996” shows that whites’ support for segregated housing declined dramatically from about 40% in the early 1970s to about 12% in 1996. So few whites now support legal segregation that the GSS stopped asking about segregated housing after 1996.

Despite these changes, several scholars say that overt racism has been replaced by a subtle form of racial prejudice, termed cultural racism, that avoids notions of biological inferiority (Quillian, 2006; Bobo, Kluegel, & Smith, 1997, p. 15; Sears, 1988). Instead, it involves stereotypes about minority groups, a belief that their higher rates of poverty are due to their cultural inferiority, and opposition to government policies to help them. In effect, this new form of prejudice blames minorities themselves for their low socioeconomic standing and involves such beliefs that they simply do not want to work hard. As Lawrence Bobo and colleagues (Bobo, Kluegel, & Smith, 1997, p. 31) put it, “Blacks are still stereotyped and blamed as the architects of their own disadvantaged status.” They note that these views lead whites to oppose government efforts to help to alleviate the condition of poverty for minorities.

Authoritarian Personality Theory – A social-psychological theory of prejudice in which it is thought that individuals with authoritarian-type personalities are more prone to prejudice.

Biological Racism – A form of racism based on the belief that a minority group is biologically inferior to a dominant group.

Cultural Racism – A form of racism based on the belief the position of a racial-ethnic minority group within the system of stratification is due to their cultural traits.

Ethnic competition theory – a sociological theory of prejudice which holds that ethnic prejudice and conflict increase when two or more ethnic groups find themselves competing for jobs, housing, and other goals.

Group Threat Theory – A sociological theory on prejudice that finds prejudice arises from competition over jobs and other resources and from disagreement over various political issues. When groups vie with each other over these matters, they often become hostile toward each other

Prejudice – a set of negative attitudes, beliefs, and judgments about groups, and about individual members of those groups.

Racism – the belief that certain racial or ethnic groups are biologically or culturally inferior to one’s own.

Scapegoat Theory – A social-psychological theory of prejudice in which it is thought that people who are frustrated by their life circumstances will blame their troubles on low status groups.

Social Learning Theory – a sociology theory of prejudice in which it is argued that prejudice is the result of socialization from parents, peers, and news media and other various aspects of their culture.

Stereotypes – simplified, mistaken generalizations about people because of their race and/or ethnicity, which are not tested against reality and which are learned second-hand.

a set of negative attitudes, beliefs, and judgments about groups, and about individual members of those groups

simplified, mistaken generalizations about people because of their race and/or ethnicity, which are not tested against reality and which are learned second-hand

an symbolic interaction theory of prejudice in which it is argued that prejudice is the result of socialization from parents, peers, and news media and other various aspects of their culture

a theory of prejudice which holds that ethnic prejudice and conflict increase when two or more ethnic groups find themselves competing for jobs, housing, and other goals