When we hear the term economy, it is usually in the context of how the economy “is doing”: Is inflation soaring or under control? Is the economy growing or shrinking? Is unemployment rising, declining, or remaining stable? Are new college graduates finding jobs easily or not? All these questions concern the economy, but sociologists define more broadly as the social institution that organizes the production, distribution, and consumption of a society’s goods and services. Defined in this way, the economy touches us all. 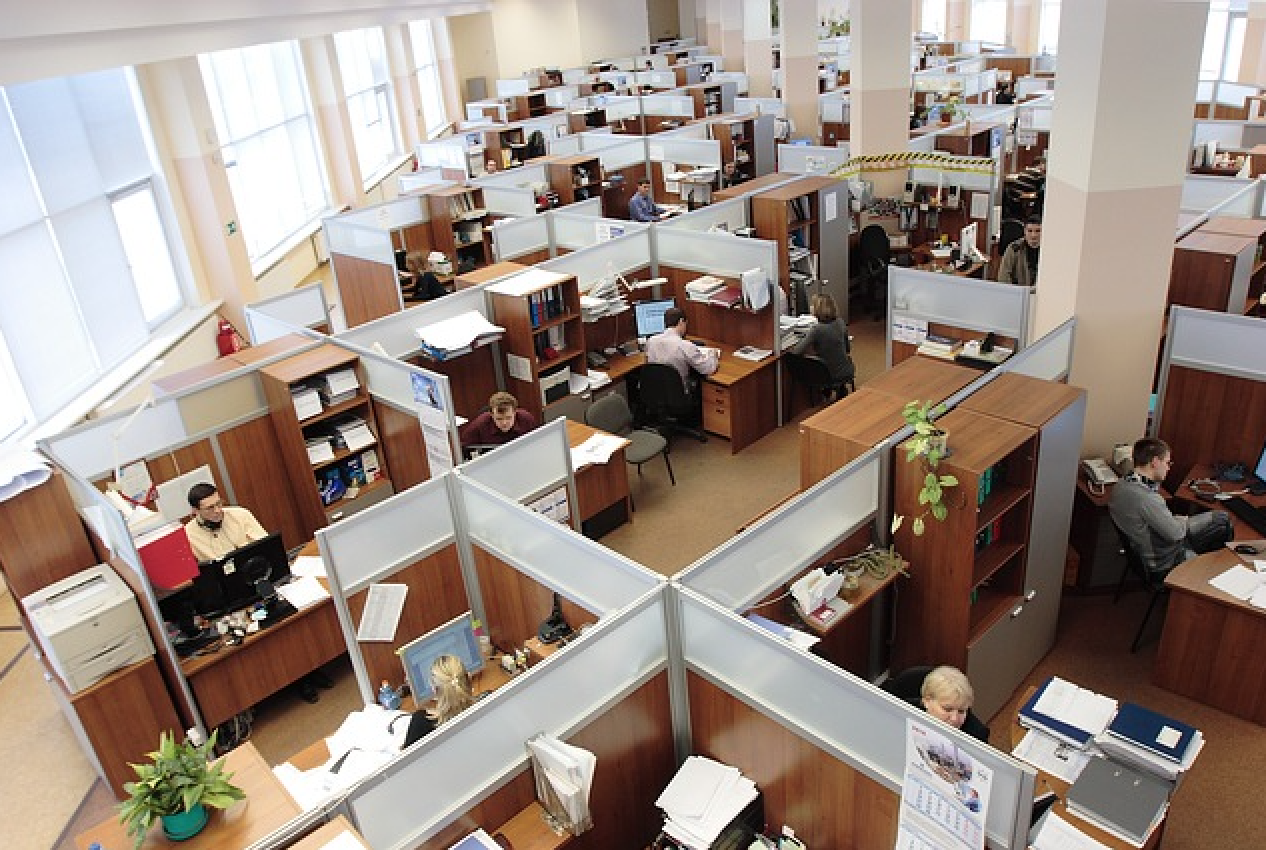 Clerical work and other occupations that provide services rather than products constitute the tertiary sector in the economy. David Mark – Pixabay

Societies differ in many ways, but they all have to produce, distribute, and consume goods and services. How this happens depends on which sectors of the economy are most important, which depends heavily on the form of the society. The U.S. was established as an agricultural society and during the colonial period and early years of the republic, the primary sector dominated the economy. In 1800, roughly three-fourths of workers (both free and enslaved) worked as farmers, miners or fishermen (Engerman and Gallman, 1986). However, by the 1850’s only 56.4% of people in the U.S. worked in the primary sector, and a burgeoning industrial/secondary sector demonstrated movement towards industrialization (Engerman and Gallman, 1966). One-hundred years later, In the 1950’s we started to see significant emergence of the service (or tertiary) economic sector, indicating a shift away from industrial dominance and movement towards the post-industrial form of society. Fifty years later, by 2000, the service sector was dominant as shown below in Figure 11.1 “Employment by Major Industry Sector, 1991 – 2019,” a trend which has continued since that time. 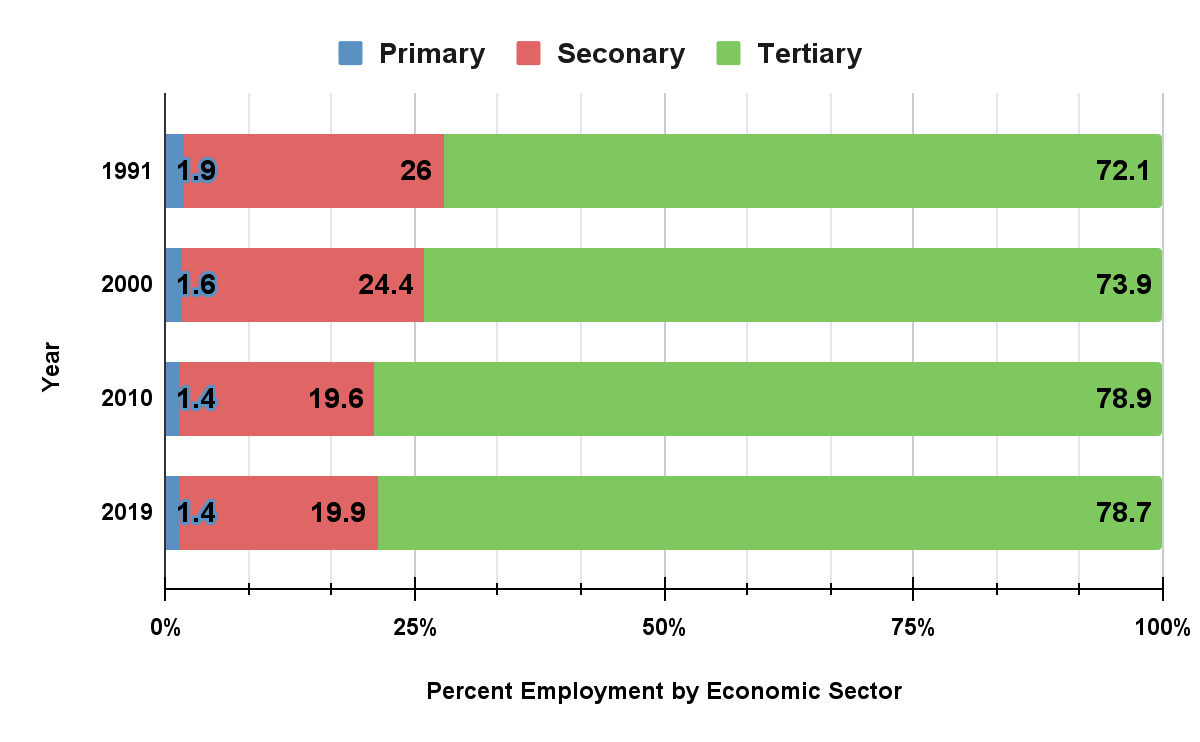 This shift to tertiary sector work did not negate the need to produce and distribute goods, of course. Rather, technological advances such as tractors meant fewer people were needed in the primary sector, freeing up labor to work in factories. Then, once factory work moved overseas because it was more profitable to manufacture goods in other countries, workers pursued employment in the service sector.

We can distinguish between different types of societies according to how they met the basic needs for survival. The earliest types were in which small bands of people gathered plants, and scavenged and hunted animals to feed themselves, something that took relatively little time though was a constant task requiring frequent migration. (The rest of the day might be spent tending to their tools and sustenance needs as well as in leisure activities like conversation, singing, dancing and joking.) The and that next developed saw people in these societies settling in an area, raising animals and/or growing crops on a small scale. These tasks were done within the family unit and efforts were primarily directed towards these responsibilities. In all of these societies, the economy in operation was in a different form than we see today. The separate institution for the production and distribution of goods and services, in the sense that we know it today, did not exist. Instead, most energy was given to the procurement of food. All economic undertakings were thus incorporated into the culture as part of daily life as directed by their subsistence strategy (foraging, raising animals or growing crops). 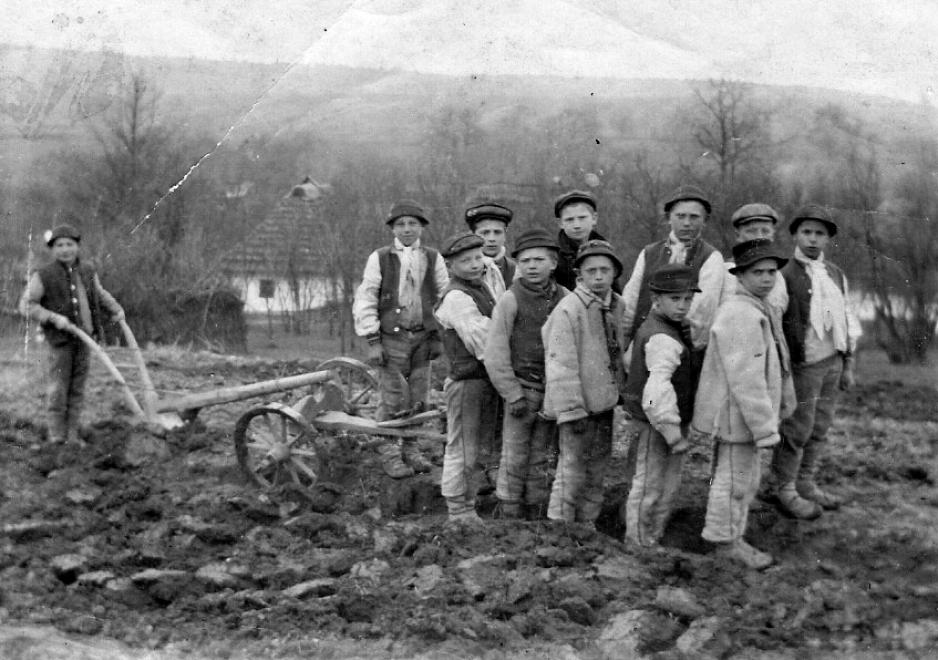 The invention of the wheel, plow and other technologies allowed agricultural societies to produce more than was needed for survival, therefore paving the way for the modern economy to develop. Tóth Ágnes – CC BY SA 3.0 – Fortepan

The more complex economies we recognize today developed with the advent of about 5,000 years ago. These societies were able to produce food surpluses thanks to the invention of the plow, the wheel and other technological advances. These surpluses led to extensive trade within the societies themselves and also with other societies. The rise of trade marked the first appearance of a separate economy. People also had to make the plows and wheels and repair them when they broke, and new crafts jobs arose to perform these functions. These jobs, too, marked the development of a separate economy. Despite this development, most people’s work still took place in or very near their homes, with the exception of craftspeople and merchants.

Industrialization and the Division of Labor

Work and home finally began to separate in the 1700s and 1800s as machines and factories became the primary means of production with the emergence of . For the first time, massive numbers of people worked in locations separate from their families, and they worked not for themselves and their families but for an employer. Whole industries developed to make the machines and build the factories and to use the machines and factories to manufacture household goods, clothing, and many other products. As should be clear, the secondary sector of the economy quickly became dominant. Perhaps inevitably it led to a growth in the tertiary (service) sector to respond to the demands of an industrial economy. For example, enterprises such as banks emerged to handle the money that industrialization brought not only to people with names like Carnegie and Rockefeller but also to a growing middle class of factory managers and the businesspeople that bought and sold the products that factories were producing. 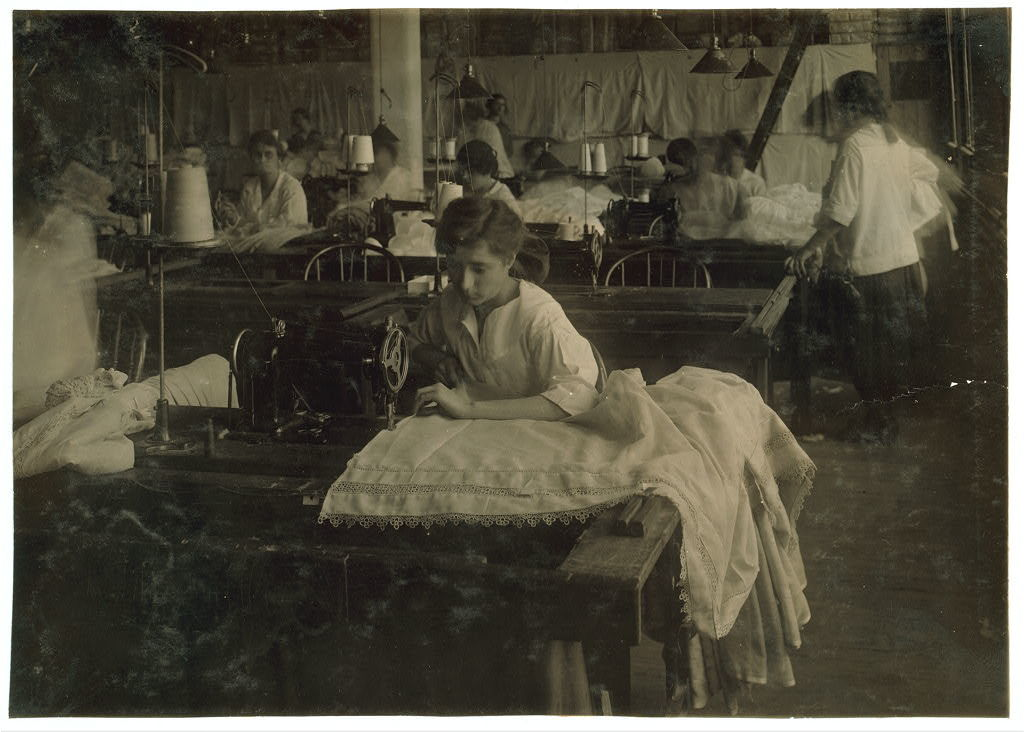 One of the hallmarks of the industrial economy was the division of labor. In the photo, women working in a factory only sewed one part of the final product, in this case sets of curtains. Lewis W.Hine – Public Domain – Library of Congress Collection

One important consequence of industrialization was the specialization of work, more commonly called the . In agricultural societies, the craftspeople who made plows, wheels, and other objects would make the whole object, not just a part of it, and then sell it themselves to a buyer. With the advent of the division of labor under industrialization, this process became more specialized: some factory workers would make only one part of an object, other factory workers would make a second part, and so on; other workers would package and ship the item; and still other workers would sell it. This division of labor meant that workers became separated from the fruits of their labor, to paraphrase Karl Marx, who also worried that the type of work just described was much more repetitive and boring for workers than the craft work that characterized earlier societies. Because of these problems, Marx said, workers in industrial societies experience , both from their work and by their work. 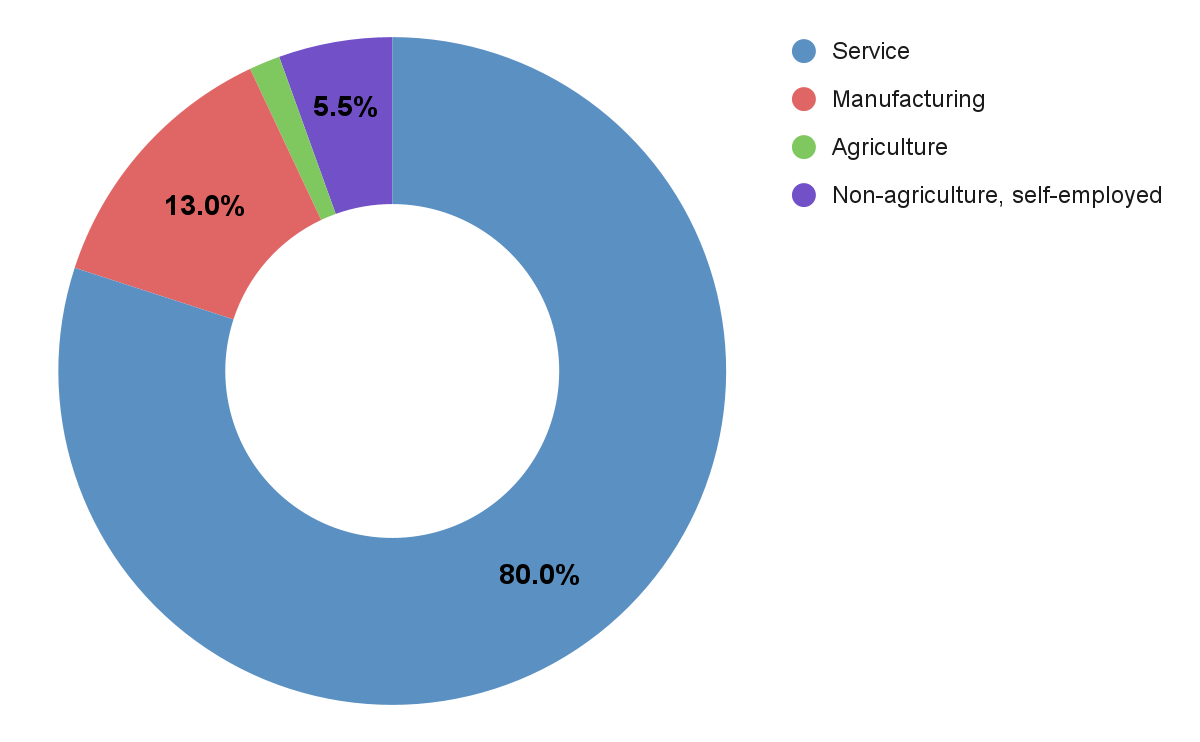 Today, much of the world has moved from an industrial economy to a and economy, where work is mainly found in the tertiary, or service sector. Employment is primarily the production of services rather than goods in industries such as telecommunications and public health, or fields such as law and education. Service sector labor is that which the worker is selling their skills and knowledge, and includes work as varied as personal trainers to doctors, accountants to hairdressers, social workers to real estate agents. You can see in Figure 11.2 “Employment by Industry in the U.S., 2020,” that the vast majority of employment in the United States is in the service sector, with the fewest jobs being in the primary sector (1.5%).

This is the information age, in which smartphones, computers, tablets, and other high-tech equipment have begun to replace machines and factories as the major means of production and in which the tertiary sector has supplanted the secondary sector. Although the information age has brought with it jobs and careers unimaginable a generation ago, it has also meant that a college education has become increasingly important for stable and well-paid employment. Post-industrial economies, then, are leaving behind workers without college degrees, who used to fare well in the manufacturing industries. 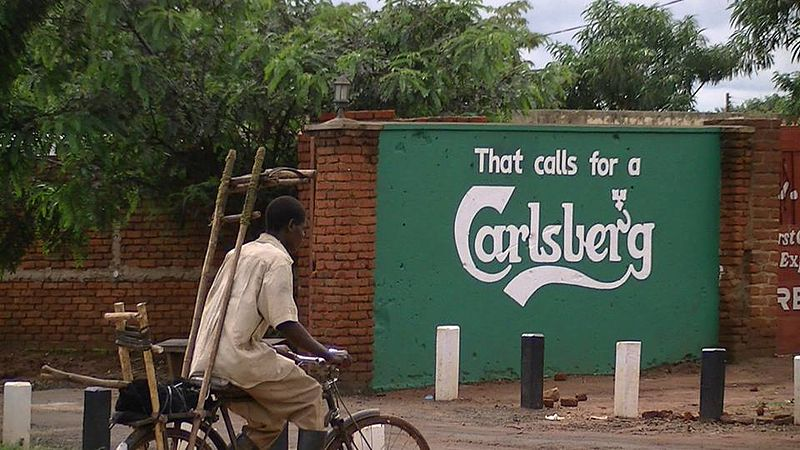 Thanks to globalization, a man in Malawi can bicycle past a billboard for a beer made in Denmark. Arnoldus9 – CC BY-SA 4.0 – Wikimedia Commons

In addition to the expansion of the tertiary or service sector, post-industrialization also brings dramatic expansion of globalization. refers to the process of integrating governments, cultures, and financial markets through international trade into a single world market. The Internet connects workers and industries across the world, and multinational corporations have plants in many countries that make products for consumers in other countries. Multinational corporations collect resources from a variety of different nations, conduct their business without regard to national borders and concentrate wealth in the hands of high-income nations and wealthy individuals (Griffiths, et. al., 2015).

As a result of globalization and expansion of multinational corporations, we see the emergence of , where products are assembled over the course of several international transactions. For instance, Apple designs its next-generation Mac prototype in the United States, components are made in various low- and middle-income nations, such as China, they are then shipped to other low- or middle-income nations, such as Malaysia, for assembly, and tech support is outsourced to India.

Another outcome of globalization relates to the fact that what happens economically in one part of the world can greatly affect what happens economically in other parts of the world. As mentioned in section 11.1, the supply chain disruption in Asia caused by the pandemic precipitated shortages of many different products in the U.S. If the economies of Europe sour, their demand for U.S. products may decline, forcing a souring of the U.S. economy, such as what happened with the financial crisis in Greece and other parts of Europe during the spring of 2010; the instability there caused the stock markets in the United States to plunge. Other concerns associated with globalization relate to fears that multinational corporations can use their vast wealth and resources to control governments to act in their interest rather than that of the local population and that production in low- and middle-income nations, where there is limited regulation, negatively impacts the environment and local economies (Bakan, 2004; Griffiths, et. al., 2015).

social institution that organizes the production, distribution, and consumption of a society’s goods and services

part of the economy that provides services rather than products

a form of society in with food is acquired by foraging, scavenging and hunting

a specialization of work that was a consequence of industrialization

Marx argued industrial societies are characterized by alienated labor, where workers find no power, purpose or pleasure in their work

the process of integrating governments, cultures, and financial markets through international trade into a single world market

products assembled over the course of several international transactions