The major sociological perspectives on education fall nicely into the functional, conflict, and symbolic interaction approaches (Ballantine & Hammack, 2009). The “Theory Snapshot” below, summarizes what these approaches say.

The Functions of Education

Functional theory stresses the functions that education serves in fulfilling a society’s various needs. Perhaps the most important function of education is . If children need to learn the norms, values, and skills they need to function in society, then education is a primary vehicle for such learning. Schools teach academic content, as we all know, but they also teach many of the society’s norms and values. In the United States, these norms and values include respect for authority, patriotism, punctuality, individualism and competition. Regarding individualism and competition, American students from an early age compete as individuals over grades and other rewards. The situation is quite the opposite in Japan, where children learn the traditional Japanese values of harmony and group belonging from their schooling (Schneider & Silverman, 2010). They learn to value their membership in their homeroom, or kumi, and are evaluated more on their kumi’s performance than on their own individual performance.

A second function of education is . For a society to work, functionalists say, people must subscribe to a common set of beliefs and values. As we saw, the development of such common views was a goal of the system of free, compulsory education that developed in the 19th century. Thousands of immigrant children in the United States today are learning English, U.S. history, and other subjects that help prepare them for the workforce and integrate them into American life. Such integration is a major goal of the English-only movement, whose advocates say that only English should be used to teach children whose native tongue is Spanish, Vietnamese, or whatever other language their parents speak at home. Critics of this movement say it slows down these children’s education and weakens their ethnic identity (Schildkraut, 2005).

A third function of education is . Beginning in grade school, students are identified by teachers and other school officials either as bright and motivated or as less bright and even educationally challenged. Depending on how they are identified, children are taught at the level that is thought to suit them best. In this way they are prepared in the most appropriate way possible for their later station in life. Whether this process works as well as it should is an important issue, and we explore it further when we discuss school tracking shortly.

is a fourth function of education. Our scientists cannot make important scientific discoveries and our artists and thinkers cannot come up with great works of art, poetry, and prose unless they have first been educated in the many subjects they need to know for their chosen path. 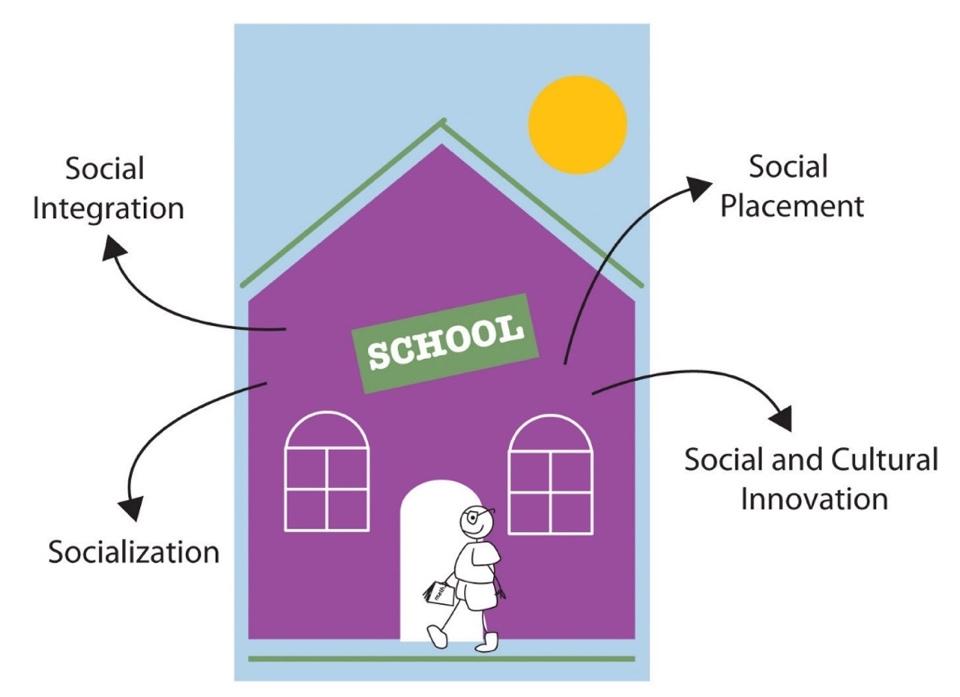 Education also involves several latent functions, functions that are by-products of going to school and receiving an education rather than a direct effect of the education itself. One of these is childcare. Once a child starts kindergarten and then first grade, for several hours a day the child is taken care of outside of the home. The establishment of peer relationships is another latent function of schooling. Most of us met many of our friends while we were in school at whatever grade level, and some of those friendships endure the rest of our lives. A final latent function of education is that it keeps millions of high school students out of the full-time labor force. This fact keeps the unemployment rate lower than it would be if they were in the labor force.

The conflict perspective does not dispute most of the functions just described. However, it does give some of them a different slant and talks about various ways in which education perpetuates social inequality (Hill, Macrine, & Gabbard, 2010; Liston, 1990). One example involves the function of social placement. As most schools track their students starting in grade school, the students thought to be more capable, according to standardized tests, are placed in the higher tracks (especially in reading and math), while students thought to be less capable are placed in lower tracks; in high school, three common tracks are the college track, vocational track, and general track.

While tracking is seen by some as beneficial for providing educational programming based on level of ability, conflict theorists say tracking also helps perpetuate social inequality by locking students into different tracks. Worse yet, several studies show that students’ social class and race-ethnicity affect the track into which they are placed, even though their intellectual abilities and potential should be the only things that matter; white, middle-class students are more likely to be tracked “up,” while poorer students and students of color are more likely to be tracked “down.” Once they are tracked, students learn more if they are tracked up and less if they are tracked down. The latter tend to lose self-esteem and begin to think they have little academic ability and thus do worse in school because they were tracked down. In this way, tracking is thought to be good for those tracked up and bad for those tracked down. Conflict theorists thus say that tracking perpetuates social inequality based on social class, race and ethnicity (Ansalone, 2006; Oakes, 2005).

Social inequality is also perpetuated through the widespread use of standardized tests. Critics say these tests continue to be culturally biased, as they include questions whose answers are most likely to be known by white, middle-class students, whose backgrounds have afforded them various experiences that help them answer the questions. (The Dove Counterbalance General Intelligence Test, renamed the Chitling Test, was written in 1968 to point out how tests often assess familiarity with culture rather than knowledge. Click here to read some of the questions: Chitling Test) They also say that scores on standardized tests reflect students’ socioeconomic status and experiences in addition to their academic abilities. To the extent this critique is true, standardized tests reflect and further perpetuate social inequality (Grodsky, Warren, & Felts, 2008).

As we will see, schools in the United States also differ mightily in their resources, learning conditions, and other aspects, all of which affect how much students can learn in them. Simply put, schools are unequal, and their very inequality helps perpetuate inequality in the larger society. Conflict theorists also say that schooling teaches a , by which they mean a set of values and beliefs that support the status quo, including the existing social hierarchy (Booher-Jennings, 2008). Although no one plots this behind closed doors, our schoolchildren learn patriotic values and respect for authority from the books they read and from various classroom activities.

Symbolic interactionist studies of education examine social interaction in the classroom, on the playground, and in other school venues. These studies help us understand what happens in the schools themselves, but they also help us understand how what occurs in school is relevant for the larger society. Some studies, for example, show how children’s playground activities reinforce gender-role socialization. Girls tend to play more cooperative games, while boys play more competitive sports (Thorne, 1993). 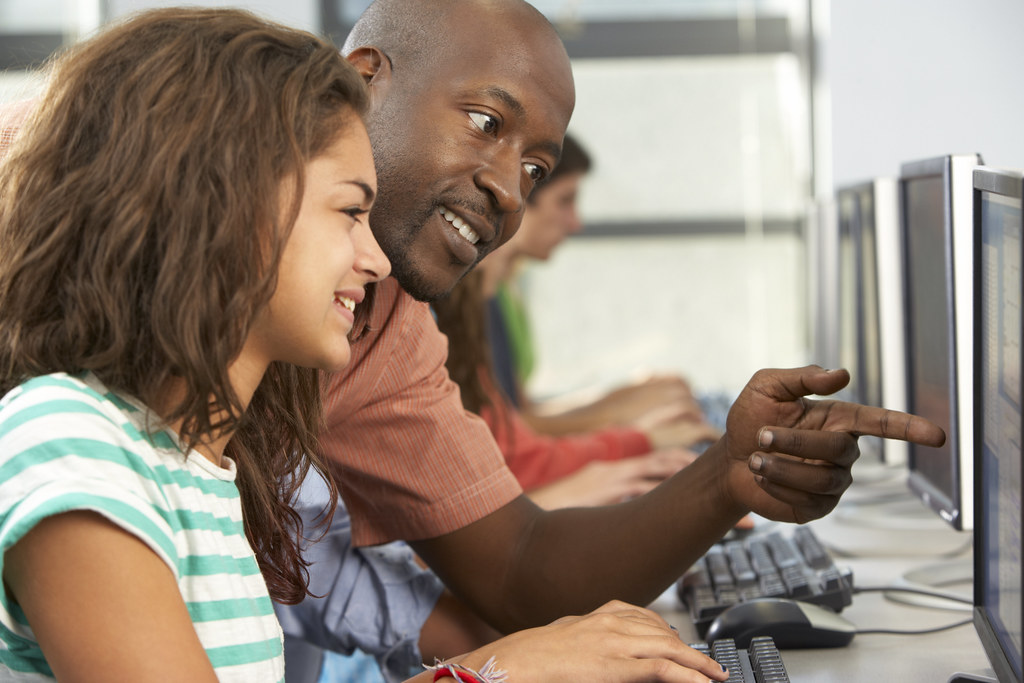 Another body of research shows that teachers’ views about students can affect how much the students learn. When teachers think students are smart, they tend to spend more time with them, to call on them, and to praise them when they give the right answer. Not surprisingly these students learn more because of their teachers’ behavior. But when teachers think students are less capable, they tend to spend less time with them and act in a way that leads the students to learn less. Once a student is so labeled, it is very possible the student will start living up to the associated expectations. Symbolic interactionist, Robert Merton, called this type of situation a , or “a false definition of the situation evoking a new behavior which makes the originally false conception come true” (Merton 1968: 477).

One of the first studies to find this example of a self-fulfilling prophecy was conducted by Robert Rosenthal and Lenore Jacobson (1968). They tested a group of students at the beginning of the school year and told their teachers which students were bright, and which were not. They tested the students again at the end of the school year; not surprisingly the bright students had learned more during the year than the less bright ones. But it turned out that the researchers had randomly decided which students would be designated bright and less bright. Because the “bright” students learned more during the school year without actually being brighter at the beginning, their teachers’ behavior must have been the reason. In fact, their teachers did spend more time with them and praised them more often than was true for the “less bright” students. To the extent this type of self-fulfilling prophecy occurs, it helps us understand why tracking is bad for the students tracked down.

Other research focuses on how teachers treat girls and boys. Several studies from the 1970s through the 1990s found that teachers call on boys more often and praise them more often (American Association of University Women Educational Foundation, 1998; Jones & Dindia, 2004). Teachers did not do this consciously, but their behavior nonetheless sent an implicit message to girls that math and science are not for girls and that they are not suited to do well in these subjects. This body of research stimulated efforts to educate teachers about the ways in which they may unwittingly send these messages and about strategies they could use to promote greater interest and achievement by girls in math and science (Battey, Kafai, Nixon, & Kao, 2007).

Booher-Jennings, J. (2008). Learning to label: Socialisation, gender, and the hidden curriculum of high-stakes testing. British Journal of Sociology of Education, 29, 149–160.

NEA. (2021, April). Rankings of the States 2020 and Estimates of School Statistics 2021. Education ranking by state 2021 schools. Retrieved from https://www.best-schools.info/education-ranking-by-state-2021/.

teaching students a common set of beliefs and values

what conflict theorists call part of the schooling process that gets children to accept, without questioning, the cultural values of the society in which the schools are found