You have learned that socialization is a lifelong process. Every time a person changes to a new status such as a college student or Pizza Hut manager, they need to learn the values and norms associated with the new position. Most of the time, the new norms are similar to the old ones and the process is not too challenging.

Other experiences may require more extensive changes, which occur through . They are still voluntary, such as getting divorced or joining Alcoholics Anonymous, but involve significantly changing one’s values, beliefs, and norms. For example, the goal of Alcoholics Anonymous is to try to change the alcoholics’ value system by having them internalize several principles about how to live their life. The goal here, of course, is to have the alcoholic stop drinking and to continue to refrain from drinking (Davis & Jansen, 1998). Some religious cults also resocialize their members to have new beliefs, values and norms; they continue to spark much controversy due to their brainwashing techniques and level of control exerted over members (Cowan & Bromley, 2008). 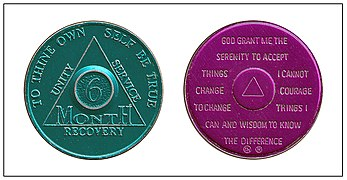 Alcoholics Anonymous medal, given to those who have been sober a certain number of months. On the back stands the Serenity Prayer. The purple medal is for 9 months of sobriety. Jonn Leffmann – CC BY 3.0 – Wikimedia Commons

At the other extreme is involuntary resocialization in places Erving Goffman (1961) termed . In such places, people are isolated from the rest of society and are under the total control of the officials who run the institution. As a result of the isolation and lack of autonomy, the person finds their old values, beliefs and norms no longer work, and so have to learn a completely new set of norms in order to survive. 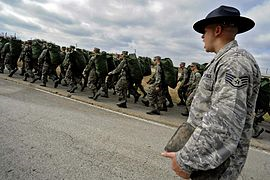 In order for resocialization to occur in these total institutions, in many cases first the person undergoes a , an encounter in which a resident is humiliated, often in front of the institution’s other residents or officials (Goffman, 1961). A drill sergeant may call a physically unconditioned male recruit a “girl” or “lady” and question his manhood in front of other recruits. In a psychiatric facility or prison, an inmate may be stripped naked and checked for lice and other vermin. Shaving the heads of new military recruits or prison inmates is another example of a degradation ceremony. The point of the degradation ceremony is to separate the person from their former self. Friends, family, personal possessions, all indications of who they were – even their name – is stripped away. In their place are new rules and regulations and an expectation to conform to them.

The second step in the resocialization process occurs when the staff aim to build a more compliant person. A system of rewards and punishments are used to encourage conformity to the new institution’s norms. Television or exercise privileges reward, while solitary confinement punishes. It is the harsh punishment meted out in total institutions that gets the most concern. For instance, drill instructors at basic training have a reputation for being unpleasantly tough. However, complete resocialization requires both an immersive environment and absolute submission to authority to succeed. While some find the treatment of new recruits abusive, others defend it as necessary for military discipline and readiness. The military is an authoritarian organization that demands soldiers to obey orders, something that is learned at boot camp. Failure to comply with the military’s rules means the recruit has not been successfully resocialized to the military culture and is washed out of the program. Religious cloisters have a similar structure, and also demand complete submission, with similar extreme punishments.

This does not mean extreme forms of punishment in total institutions are unknown. Literature on psychiatric hospitals is filled with examples of abuses of the patients living there (Goffman, 1961). Prison guards have been accused of using indefinite solitary confinement, stun guns, chemical agents and excessive force when interacting with inmates (ACLU, 2014). Concentration camps run by the Nazis tortured, starved, experimented on and then murdered their prisoners.

Reactions by individuals to resocialization in total institutions varies. Some are able to completely absorb the new list of values and norms, successfully becoming soldiers or monks, or becoming rehabilitated in prison. Others adopt the new behaviors temporarily, for example being model prisoners inside but reverting to previous criminal enterprises upon release – which begs the question of whether they were truly resocialized in the first place.

While resocialization refers to the need to make fundamental changes to one’s values, beliefs and norms, a particularly severe form of resocialization is called , or the process of developing extremist ideologies and beliefs (Borum, 2012). We will revisit this topic again in Chapter 11 when terrorism is discussed. For the purposes of Chapter 4, understand that radicalization does not guarantee behavior; people may adhere to extreme views but not act on them, while others engage in acts of terrorism without having deep connections to a movement. In his article about how people become terrorists, Borum outlines not only what people think but how they come to think as they do. Sociologists emphasize how the social structure has to have an opening to allow for radical thought as well as the opportunity for the individual to be radicalized via social interaction. Termed conversion theory, Lewis Rambo described seven cumulative stages that result in radicalization.

organizations that have total control over the lives of the people who live in them (e.g., prison, boot camps, convents, etc.)

a ceremony, ritual or encounter in which a total institution’s resident is humiliated, often in front of the institution’s other residents or officials

the process of developing extremist ideologies and beliefs