This essay was written in response to the same primary research on a historical subject assignment in English 121.

For John Berry, the US Army led him from a small beach town in New Jersey to becoming an executive in a major corporation in Michigan. Growing up in New Jersey John Berry was a typical boy who enjoyed sports, spending time on the beach with friends. As graduation neared, he considered joining the Army because it was something that interested him and he wanted a challenge. He wasn’t sure what he wanted to do in college and he knew that he’d get money for college by joining the Army. He was just 17 years old when he signed up. It was 1984, his senior year of high school. He signed up then left a month after graduating from high school. He was a bit nervous, but he never regretted his decision to join. No friends joined the Army with him, but he did make some good friends when he was there that he still has to this day.

John Berry was trained for war which is also known as infantry.  He learned all sorts of skills like training with weapons, in-hand combat, land navigation, tactics, and physical/mental fitness to toughen them up. He says that you get used to being alone in the dark that it eventually gets to the point where it doesn’t bother you anymore. He was nervous a few times about flying in dangerous weather and it was cold a lot.

“Sometimes we were put in extremely cold weather for an extended period of time,” he says. “It was extremely mentally and physically challenging.”

His favorite thing about the Army was making new friends, traveling, and the fact that he got to learn more about himself and his abilities. What he didn’t like very much was the fact that things got repeated a lot and there were a lot of rules and regulations that made no sense.

“For example, we often had to assemble in company formation for no reason other than to be dismissed for the day. It was maddening to have everyone stop what they were doing just to line up and then leave,” he says.

Another thing that he enjoyed about being in the Army was traveling. He first traveled to Fort Benning Georgia for one year of training. Then the National Training Center for a month that’s located in a desert in Fort Irwin, California. Once his training was finished, he was sent to Ohau, Hawaii where he was stationed for three years. While he was in Hawaii, he traveled all around the Pacific Ocean. He went to South Korea and went to the DMZ zone in North Korea, which is where the North and South meet. He said that the soldiers who were stationed at the towers couldn’t sleep outside of their uniform, and had to sleep with their guns/ weapons on them at all times because they have to be ready for war. He also visited China as well. He got to train with counterparts from Korea, Japan, Thailand, and the UK, including British Gurkha from Nepal. He remembers challenging moments in his Army days where he did things that he never thought were possible, like walking further or shooting at a longer distance than he thought he could.

“I remember taking long marches in Northern Japan,” says Berry. “I remember on one march it was so cold that they let finally let us stop and set up our tents. In just 30 minutes the bungee cords on the tent were frozen solid! As soldiers, we were being trained to just grin and bear it and move on.”

He didn’t stay in the Army longer because he planned on going to college afterwards. So, after his four years were up, he went to college at Michigan State University, where his grandfather attended in the 1930s. He once considered going back after college to be an infantry officer, but he didn’t because he was going to get married and didn’t want to leave her. What influenced his

decision was the fact that being an infantry officer would mean more time away from family and it would be hard to also have a full time with it. What he got out of working in the Army was that it gave him confidence in his abilities and taught him to work with all different types of people who all have different types of backgrounds and races.

“In the Army, I met people from all over. There were people from inner city Los Angeles and people from small town farms in Wisconsin. Regardless of where we came from, the Army connected all of us and we all worked together as friends and teammates,” says Berry.

If he could go back in time to when he signed up for the Army, he would 100% make the same decision because although it was hard at times, and sometimes he didn’t enjoy it, it was a good experience and it set him on the path that he’s on today.

“It was good for me,” says Berry.  “It allowed me to go to college when I had both the resources and the mindset to do so, which I didn’t have previously.”

After college, John Berry went on to a career in the accounting field, a field that requires focus, attention to detail, and problem solving. These were all skills he learned and practiced in the military.

“The Army definitely helped get me where I am today,” he says.

While it was a great experience, he would want other teenagers to know that they should be ready for the commitment and the challenges the military requires.

“Be clear on why you are enlisting in the first place and use that knowledge to focus and help get you through the challenges that you will surely face,” says Berry. 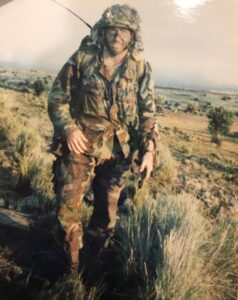 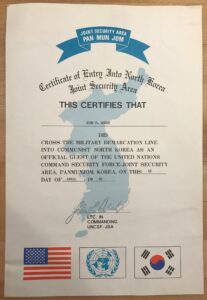 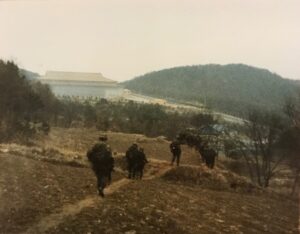 John Berry hiking in South Korea with his troop.

Professor Christopher Manning had this to say about Jillian Berry’s writing.” This research helped Jillian achieve a deeper appreciation of the obstacles her father had overcome. If she had paid even more attention to details that would have helped her writing.”