This is another of Professor Manning’s 121 students who did primary research in English 121.

She has a name, right? Or does she? Wait we will get to that part of the story. How did this happen to her she often asked herself? She always believed in another world that she was a mermaid, but right now she felt lost at sea. She’s the type of person that will give her last and want nothing in return. She has two legs but they don’t work. Stuck in a chair yet she still smiles why? It’s in the newspaper now everyone will know, but this is a good thing, right? Pride is one of her biggest obstacles she had to overcome in her 42 years or life. To ask for help or suffer in silence the choice was hers and it wasn’t an easy one for her to make. Her faith in God kept her going, but her faith in herself sometimes did not. Again, how did she get here in the first place? She wanted to give up, and one time she even tried. She often referenced the Miley Cyrus song “The Climb” in life there’s always going to be another mountain. Another obstacle to overcome the question is did she make the make mountain move?

She was diagnosed with Multiple Sclerosis at the age of nineteen. Fast forward three children later at the age of 26 her ability to walk had been taken from her. This was her new reality, her new normal. Coming to terms with her illness is still an ongoing battle of hers. She likes to think God gave her this illness as a way to sit her down, and as a way to keep an eye on her. In her young teenage years she was pretty wild and knew how to have a good time. She jokes that this is God’s version of a time out, before she ever had the chance to get too out of hand. Multiple sclerosis did gain her physical strength but It never gained her personality. Her Hazel eyes are unforgettable, her hair is long like Rapunzels. The light inside of her shines so bright that even an illness like this one could never put it out. Her voice is soft yet when she speaks others listen. She’s the look at the glass half full instead of half empty type. It doesn’t take much to make her happy. She had always been optimistic until one day she just wasn’t. She never pictured her life this way for her and her three daughters. She never thought she’d end up being the mother who was on the front page of the local news article, but here she was.

Having to rely on others is something to this day she still hates. Unable to work and provide for herself in a world where money is everything, she is trapped. She’d never been the best at math back in her school days but she was certain that the $700 a month disability check she received once a month was not enough to pay rent and provide for herself and her children. Does she pay the Water bill? or get her daughter a birthday present this month? Somewhere along the way she got lost. It wasn’t fair like many other things in her life. Homelessness was a road she unfortunately had been on before as a child growing up. Five children with one mother life wasn’t always peaches and cream. History repeats itself and now she found herself back on this road she had always hoped to never return to. But this time she was the mother in the situation having to figure out how to make a way, and provide for her children. She had been in situations like this before but never for this amount of time. Although she was aware of the light at the end of the tunnel at the time everything seemed so dark. Fed up with feeling like a failure feeling like she would never escape this horrible cycle of homelessness, she tried to take herself out of the equation. She heard of the term rock bottom and she official reached hers.

This is where pride comes into play, ask for help or suffer in silence? As a cry for help her youngest and only daughter still under 18 years old reached out to Facebook for help. She started a gofundme in hopes to raise money to help with permanent housing. Mike Karl founder of An Organization Homeless Angels reached out and offered her and her daughter a place to stay at a local shelter. This shelter was handicap accessible unlike most other shelters in the Lansing area where she was born and raised. The shelter was a blessing but still nothing like having a home of her own. At night she shared a queen size bed with her daughter and often relied on fast food or microwaveable meals. They were safe but still suffering and wondering when the time would come for them to move into a place of their own. The gofundme started to trend on social media and that brought the attention to the local Newspaper the Lansing State Journal. The newspaper reached out to her wanting to share her story in the hopes of finding her affordable housing. Pride filled her head what would other people think about her? She was scared of what others had to say. Pride ultimately got thrown out of the window, and she chose not to suffer in silence any longer. That became one of the best decisions she has made for herself.

The article the newspapers did on her story lead to several different organizations reaching out with permanent housing offers. The light at the end of the tunnel finally started to peak its way in. She spent a few more months in the shelter before she was placed in her current home. She now has a place of her own where she drinks French vanilla coffee by the fireplace. Her daughter has her own room with Christmas lights strung across the ceiling, they’re happy. Homelessness will always be a part of her story, a part of what makes her who she is. But homelessness is now a part of her past that she has learned responsibility from. Life has not been easy for her but somewhere along the way she had the grit and perseverance to keep on going. She has learned to acknowledge the joy and blessings that have come her way despite the hurtles she had to overcome. She now is open about her past and likes to share her story with others. She will be in a play at Lansing Community College this fall called “I have a name.” The play is about herself along with 4 other locals each sharing their stories on homelessness, and how it affected their lives. She has a name, her name is Shylah Outlaw, and she is no longer lost at sea. Shylah finally has a place to call home. Now she watches her grandchildren run wild in the front yard, and watches “The Price Is Right” every morning at 11am. Shylah now has a beautiful garden filled with flowers, she spends most of her time on the porch taking it all in. Shylah now enjoys home cooked roast and potatoes for dinner, and breakfast burritos on a regular. For once in Shylah’s life she has everything she needs, she is content. It has not been an easy road, she definitely went over some bumps along the way. Looking back maybe Shylah didn’t always make the right decisions in life, but one thing for sure is she learned from her struggles. Shylah is her name and homelessness will always be apart of her story. Shylah now hopes to help others who are suffering. She plans to do some motivational speaking to encourage others that there is light at the end of the tunnel. “Everything happens for a reason, I feel so blessed to be where I am today,” Shylah said to her youngest daughter. Shylah still deals with the struggles of Multiple Sclerosis, it’s an ongoing battle she unfortunately will continue to face. She is much stronger now than she was before. She has a name and a voice that will be heard by many, the light in her will forever shine brighter than the stars. 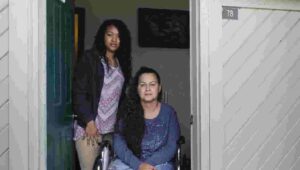 Shylah Outlaw and her daughter Tamara at The Homeless Angels shelter in 2017.
Photo by the Lansing State Journal. 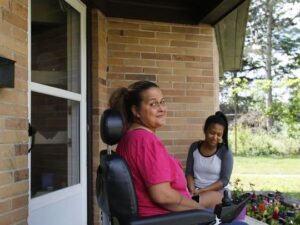 Shylah Outlaw and Tamara on the porch of their new home on June 21, 2017.
Photo by the Lansing State Journal.

Putnam, Judy. “‘A Village did this for Us’: When System Failed for Once-Homeless Mom in Wheelchair, Teen Daughter Turned to Go Fund Me.” Lansing State Journal, Jun 25 2017.

Professor Christopher Manning had this to say about Tamara Outlaw’s writing—”Tamara has an obvious connection to this engaging topic and subject.  She didn’t really have as much reflection or control of the writing as she might have. In the future in addition to focusing on the subject, which she clearly did here, she should also focus on what she has to say and what things mean.”