Paula Hutchinson and the Glass Ceiling

This is another of Professor Manning’s student’s doing primary historical research in an English 121 class.

The 1960s and the 1970s was the start of a new age for women. Voices of the era were Jane Fonda and journalist Gloria Steinem. During this time women were fighting towards equality in the workplace. History calls this age second-wave feminism. Women were struggling to break through the Glass Ceiling. The Glass Ceiling was a phrase that symbolizes women in the workforce that could only advance so far. History has cast a shadow on the women who stayed away from the spotlight not realizing the impact. Like a young girl from a small town who strove to be different to live her lifelong dream.

After years of working and living during a time where it was a “man’s world,” my grandma was so eager to tell her story. She was the one who suggested I should write my essay about her experience in the workplace as a woman. The confidence radiating off her face I could tell she has been waiting to tell her story for quite some time. Once the interview began, I was back in time. 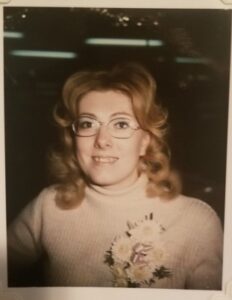 Paula Hutchinson grew up in small-town Vernon, Michigan. Raised as a Tomboy and was a natural athlete. She spent most of her summer days playing softball with her dad who coached her softball team. “He had always wanted a boy, so I guessed I was tapped.” stated my grandmother. Though playing sports was not very common it was still something that she enjoyed. Her dad was a great father and man, unfortunately, Paula’s father suffered from alcoholism. This contributed to her desire to achieve success.

When Paula was 15 she started working as a clerk for “Crawford Brothers” in Vernon, Michigan. “It was then that I decided that the business world is where I wanted to be. I wanted challenging work, and to feel proud of my accomplishments.” said my grandmother. Paula Hutchinson got accepted into the accounting program at Ferris State. But did not attend because she married my grandpa. In this period, a lot of men did not accept women wanting a career, yet, my grandpa was different. “He supported my goals” stated my grandmother.

The 1970s were a turbulent time in history. The Vietnam War ended, the hippie movement and drug usage was in full swing. My grandmother didn’t get involved in the counterculture movement. She wanted to make her mark in the business world. In 1973 she hired into Universal Electric, a motor manufacturer. My grandma was unprepared for her new journey as she was always taught that women are to be meek and non-confrontational. She soon realized that to be recognized you must speak up and not be a mouse, my grandmother explained. She later experienced that women in the workplace were subjected to. She then vowed that she would never get coffee for anyone but herself. She worked in many different departments gaining valuable experience. She along with others also experienced sexual harassment in the workplace. Two men known for their harassment of women found my grandma alone in a hallway. They positioned themselves so that she had to walk between them. All the while making sexual comments. She said this was the most uncomfortable experience she ever had. During this period women did not report this as they were not taken seriously by men in management. Workplace romances were forbidden but still happened. In almost every case when discovered it was always the woman who lost her job. 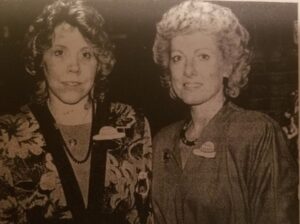 In the 1980s my grandmother went to night school and earned her college degree at Baker College in Owosso, Michigan. She started to become recognized for her hard work and valuable contributions. This is when she started working for a manager who became her mentor. He showed my grandmother how to effectively work with men in management positions. The two had each other’s backs and soon became friends. He later had left his position due to health reasons. My grandmother assumed his responsibilities and expected to be compensated fairly. This was not the case. She not only didn’t get his title she didn’t get his salary. She was told by management that it was company policy to only allow a 15% increase in pay. She knew that men had received much more. My grandmother stayed late many nights to excel in her job while the men would leave work for the day to play golf. When asked how she felt my grandmother stated: “You do not make waves if you want to progress in the company.” As her confidence grew, she began to make waves that worked to her advantage and disadvantage. An advantage was being the first woman invited to the annual national sales meeting. She explained how excited she was. But somewhat frightened because she did not know if she would be accepted. In 1984 my grandmother got voted “Business Associate of the year” by the Shiawassee American Business Women’s Association. They recognized her for her ability to rise through the ranks to management level. This influenced many women. The disadvantage was when she unknowingly stepped on the toes of a male upper manager. She pointed out that he was making excuses for his failures. That would have been brushed off if it had come from a male coworker. Since it was a woman it was viewed as an attack against him and his ego. This removed my grandmother from her position. This was a low point in her career, but this would lead to bigger accomplishments. As she was explaining her story, she leaned into the microphone to give her advice. “Understand workplace politics.

Be careful of attaching yourself to someone’s coattails because if they go down you go down.”

During the late ’80s and early 90’s, she got the opportunity to become a software site implementation manager. This allowed her to travel to many other states within Magnetek. This allowed her a great networking opportunity. This networking led her to Nashville, Tennessee as a customer service manager. During her company going away party, she received a card from a female coworker. The coworker thanked her for opening up opportunities for women in the workplace and being a role model. It was at that point my grandmother had realized the impact she had made on other women. She had finally got the recognition that she had been looking for within the company.

In conclusion, Paula Hutchinson had experienced decades in the workplace and in a “man’s world”. The 70’s as an introduction to the unfair treatment of women in the workplace. The 80’s as a time for growth and change for not only my grandma but a change for women in general. The 90 gave women the recognition and respect they so deserve. My grandmother was in the shadows of historical events that lead to equality for women in the workforce. But she worked hard for what she believed was right. 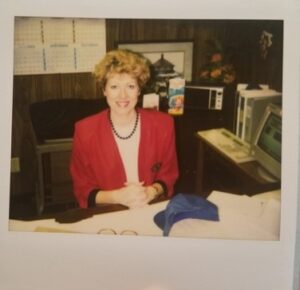 1992 – Paula Hutchinson on the job as an Inside Sales Engineer and Marketing Special Projects Specialist.

Paula Hutchinson. Interview (November 2019).
Professor Manning had this to say about Sara Hutchinson’s writing. “This student had a good subject and really became more aware of what the experience of women in the work place had been historically. She learned more about her grandmother’s experiences ascending through the ranks and what the ranks were.  I think Sara became more aware of what she didn’t know.” Captioning the personal photos would have been something to do in the future and paying  attention to her sentence structure and polishing her word choices could also improve her writing. Editor’s note: Sara did caption the photos before we published her work.