This is another piece of primary historical research written for English 121 and Professor Christopher Manning.

My Parisian Grandma, Ginette Colombin LePine, or known to her family and friends as Mamie à Paris. She lived in Paris, France for all of her life from 1929 when she was born to when she died in 2010. French was the only language she spoke. She lived a long and very interesting life. She shared with her son, my father, Pierre Lucien LePine, her vivid memories of life in Paris during WWII, the French Resistance, and the day she modeled for the artist Pablo Picasso.

Mamie à Paris was not rich and she did not go to college but she was very cultured. She loved to go to museums, the theater, out dancing, and to watch American movies and musicals. Her favorite American actors were Fred Astair, Ginger Rogers, Clark Gable, and Shirley Temple. She absolutely loved Shirley Temple! Growing up Mamie à Paris looked exactly like her. Even at 80 years old she still looked like Shirley Temple with her fluffy, curly, blonde hair, fair skin, and sparkling blue eyes.

Mamie à Paris, was 11 years old when the German Nazi army started invading Paris in 1941 and she was 15 years old when Paris was liberated in 1944. During WWII, Paris was a scary place, food was in short supply and life was hard for Mamie, her family, and the French people. Mamie lived in a small apartment in Saint-Ouen in France, with her mom, Ginette, her dad, Eugene, and her two younger sisters, Josette and Lili. Their apartment was far away from the Eiffel Tower and the center of Paris. 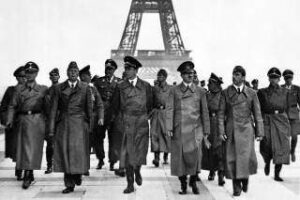 Pictured are Nazi Germans with their leader Adolf Hitler in front of the Eiffel Tower during WWII.

During WWII, the Nazi Germans were terrorizing Europe, on their evil quest to conquer the world and rid the planet of anyone who is Jewish. Adolf Hitler was the leader who caused all the terror in multiple countries. In the picture are Nazi Germans with their leader Adolf Hitler in front of the Effile tower during WWII. In 1941, the Nazi army invaded France and occupied Paris. Mamie often saw the Nazi army and the Gestapo in the streets of Paris. She vividly remembered how scary and loud their boots were when they marched down the Paris streets, dressed in their Nazi uniforms and armed with heavy artillery. They terrified her and her family. Mamie said that instead of destroying the city of Paris when they invaded it, the Nazi leaders fell in love with the beauty of Paris, its beautiful buildings and all its castles and treasures. That is why the Nazi’s decided to occupy Paris instead of bombing it like they did to London.

When the Nazi were going door to door looking for Jewish people and others that the Nazis did not like. They came to Mamie’s door and asked for all of their full names, to see if they could be Jewish in some way. Her family was absolutely terrified because their grandmothers last name was Klien which is a Jewish last name but luckily the Nazi’s never found out. The story Mamie had told my dad was that my great grandfather, Eugene, worked for a printer who helped with printing some underground pamphlets for the French Resistance. Also, food was in very short supply and the print shop helped print extra food vouchers. The food vouchers were fake, but they worked every time. Eugene would help hide Jewish and African people in many different places but he never told anyone where even his closest family. There were many nights where he would sneak out past curfew to help hide those who the Nazis were after, threatening his life and his family’s. Years later Eugene hid some guns and weapons for the French Resistance in their home. There was an instance when the Gestapo came to their door looking for Eugene because they believed he was in the Resistance but he was not home and “my mother hid the guns from the gestapo when they went to search the house for information on the Resistance and they never found anything because my mom hid the guns in dirty laundry and under dirty diapers” Pierre continues,“ if My mom would not have hidden the guns her family would not have made it out alive and our family wouldn’t be here today.” Pierre asked his mother how she knew where the guns were and she replied with “Je ne suis pas stupide” which translates to “I’m not that stupid.” She had helped her father hide those weapons to save him and her family’s lives and the many others her father helped hide.

The Liberation of Paris on August 25, 1944, was one of the most famous and glorious moments of the French Resistance and for all the French people. Mamie à Paris was only 15 years old when Paris was liberated. She told my dad that it was a huge celebration. She said that there was music, parties, singing and dancing everywhere on the streets of Paris. It was such a relief on all in France almost everyone hated the Nazi Germans and were absolutly devastated that the French government and police force turned on the people. “France is known as the place of love and when the Nazis invaded it tore all the people in France apart,” Pierre said.

Even when Nazis occupied Paris, Mamie was still a kid trying to live her life as best she could. Her childhood dream was to become a ballerina. She loved to dance and she took many ballet classes. Unfortunately, after WWII, when she was only 17 years old, she broke her ankle which ended her dream of becoming the ballerina she hoped to be. Even so, she still loved to dance and she learned the Waltz, the Tango, the Fox Trot, the Charleston, etc. Pierre said “me and my mom would dance together all the time, she was the best dancer I knew, she taught me all the ways to shake my body.” In addition to dancing, Mamie was very creative and she loved to paint. In the 1950s she got a job in Paris working as a “colorist” for a printer. She would hand paint reproductions of artwork for postcards, books, wall hanging, etc. In the early 1950s, she said that she met the French artist Bernard Buffet and Pablo Picasso at the print shop. Picasso invited her to sit for some sketches in his studio. She said that Pablo Picasso was “ très beau” which translates to “very handsome.”​However, he did not like his sketches of her and he threw them in the garbage can. She told Pierre that it was the greatest regret of her life that she did not ask Picasso for the sketches he threw away. She said that at that time she was too young and timid to even think to ask him and she had no idea that he would become as famous as he is now.

In 1952, Mamie married my grandfather, Lucien LePine or better known as Pépé Lu Lu. He was a plumber at the time. She moved into his apartment located at 13 Rue Des Amiraux in Paris.  Where they later had a daughter Micheline and ten years later a son Pierre. 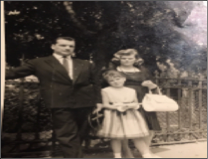 The picture is of Lucien, Ginette, and Mimi LePine in 1952 before my father Pierre was born.

The apartment is famous for its white tile façade, balconies, and a public swimming pool in the basement. The apartment has two bedrooms that you can step through, big French door windows onto the long wide balcony and see all of Paris. My family would hold gatherings on the balcony. We told stories and ate appetizers like fresh baked baguettes, and laughed, shared French cheese, and olives. 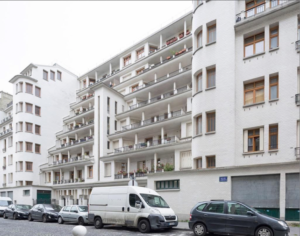 Pictured is on 13 rue des Amiraux in Paris, France. This apartment has had a long history with my family. It can be considered as a family heirloom. Pépé Lulu lived in the same apartment during WW2 with his family. He was nine at the time when bombs began falling onto the streets of Paris.

Right down the street the famous Cathedral Sacre Coeur was bombed 13 times. Pépé Lu lu and his family all took shelter in the apartment building’s basement. During the bombing him and his father would go up into the building and go into other people’s apartments risking their lives and would steal their food. Pépé Lu Lu’s father was the manager of the building and had all the keys to the apartments but he and his family did not eat every day, and did not have a lot of money. Pierre informs “that they risked their lives to save their lives.” After the war Pépé Lulu informed My father that he witnessed a bomb squad come into the building and remove a WWII bomb that never went off that stayed in the building for many years until someone found it. My Grandfather and his family were very lucky to make it through the war alive. When Pepe Lu Lu passed away in 2006 Mamie lived in it for the rest of her life. This apartment is still with my family today. It has been passed down to my cousin Melanie who now owns it and lives there every day. It will forever be very important to my family.

Despite living through the horror of WWII in France my Grandparents were able to have long happy lives with their loving family, my father said, “ They never forgot the memories and were always grateful for being alive, and to love all.” 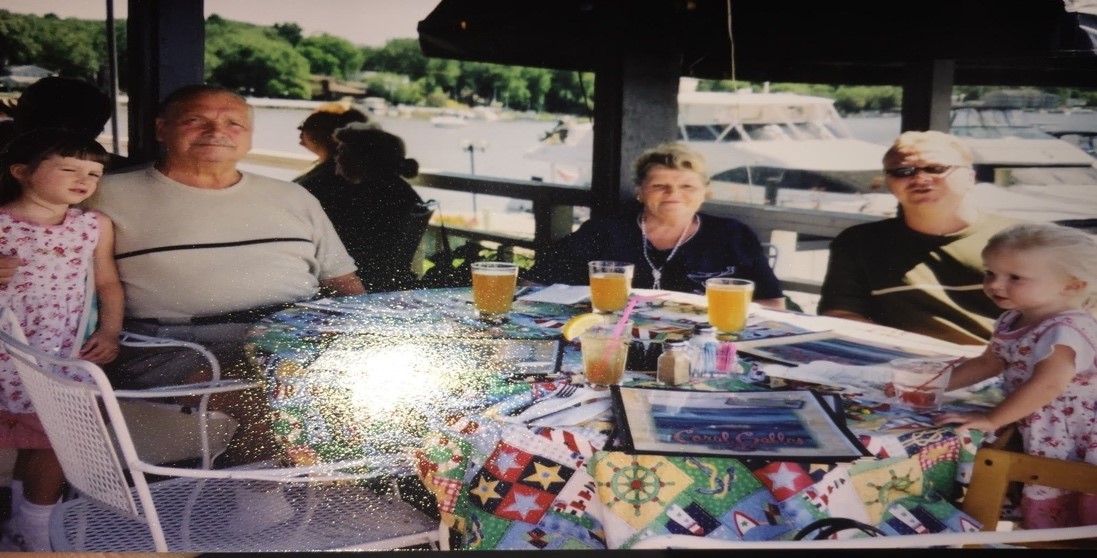 Pictured above is My sister Chloe and me with my father, and my beautiful Grandparents Pepe Lu Lu and Mamie a Paris in 2004.

Pierre Lucien LePine interviewed on October 28th 2019, about his mother and father Ginette and Lucien LePine.
Professor Manning had this to say about Margaux LePine’s writing. “The details that Margaux captured about her family were fascinating. It was interesting that the apartment became a focus and a character. Margaux worked hard to revise this paper because she cared about it.” He had few other suggestions about her writing other than to continue to reflect and analyze.