This untitled essay was also written in response to the same primary research on a historical topic assignment in English 121.

My dad, Luben Mliakoff was born and raised in Soviet Bulgaria during a time when the iron curtain was stronger than ever. He grew up in Plovdiv. Bulgaria which was and still is a beautiful city most notable for its old archaeological sites and numerous remnants of past civilizations. The cobble-stoned roads and walkways that encompass all of the downtown part of Plovdiv reveal the town’s historical roots and importance. In fact, Plovdiv is listed as the oldest city in Europe and its history dates as long as 6000 years back(Bulgaria Wine Tours). Luben lived on the first floor in an old Soviet apartment that is still up to this day. I have been inside the apartment when I visited Bulgaria and what struck me most was its musty smell and eerie aura that was reminiscent to that of the town itself. My dad went to public school from 1st to 11th grade and he remembers developing a certain distrust of communism in high school. One particular class he remembers taking that he saw as propaganda and indoctrination was called “Fundamentals of Communism.” That being said, he had a good childhood and had a wide variety of opportunities and interests he was able to pursue.

Throughout his teens and was involved in several sports including rowing and mountaineering. When he was around thirteen years old he joined a rowing team which trained on a man made lake which was called the “rowing channel.”  My dad was very involved in rowing in his early teens and then started to seriously pursue mountain climbing when he was about sixteen. Mountaineering was pivotal in his life because it is the only reason why he was able to leave the country in the first place. However, he had no intention of leaving until his brother escaped.

After his older brother escaped my dad was 21 years old and all his future plans and dreams came to a halt. My dad said he and his parents were automatically labeled as a “Pariahs” and were closely watched afterwards. At the time he was on the “Mountaineering National Team” and they were preparing for their first ascent of Mount Everest. After his older brother’s escape he was told by the police that he would be excommunicated from the National Mountaineering team and would also not be able to pursue the “University of sports medicine and therapy” which he had plans to attend. In other words all his dreams and opportunities were crushed and this is when he started looking in to ways of following his brother’s footsteps and escaping the iron curtain. As he stated, “It became obvious that I was trapped in a communist camp.”

This is when he started to look for ways to escape all that he knew to a place where he can start over and have a better future. His first thought was to escape to Greece, which was a neighboring democratic country that was part of NATO. However, he found out from a close friend of his who worked as a patrol agent there that the Greek border was extremely heavily guarded and crossing it would be an impossibility. His friend Peter said that “the guards would shoot you and get two weeks vacation.” After ruling that option out he decided to apply for a “climbing trip” to Poland with no intention of going climbing but instead to look for better escape routes.

After getting the approval to travel to Poland he realized something that was nothing short of a miracle. Usually when citizens traveled outside of Soviet Bulgaria they were given a specific itinerary which provided them with a specific route that they had to follow. However, in my father’s case he did not have the stamp on his passport that specified his itinerary.

He said “It was a miracle” and that it opened up many doors of opportunity that otherwise may have been closed if not this mistake by the People’s Republic of Bulgaria. He decided to travel through Yugoslavia with the expectation of breaking off and crossing the Italian border. At the time Yugoslavia was communist but it was not part of the Warsaw Pact, which means it wasn’t part of the Soviet Union. As well as being closer to the west, Yugoslavia was a more liberal state compared to its communist neighbors and had less secure border security. With a large backpack full of climbing gear and eighty dollars in his pocket, he took a train to the Yugoslavian border.  He said that “At the border I saw people being stripped practically naked.” The border agents were thoroughly searching everyone crossing the border.

Interestingly enough, they made an exception for him. Because of all of his climbing gear they did not suspect him whatsoever and let him pass without even checking his bag or pockets. After passing the border he got back on the train and traveled to Ljubljana, Slovenia, which at the time was part of Yugoslavia. Then he hopped on a bus and rode to the Julian Alps, located next to the border of Italy. As he was crossing a valley nearing Italy he remembers selling part of his climbing gear to a farmer. “I met this farmer on the way down the valley who ended up buying some of my climbing gear.” As he was approaching Italian territory he and getting close to freedom he did have a close encounter. “As I was coming a down a hill into Italy and a guard above me around 50 meters away yelled at me and just about scared the shit out of me.” “I quickly ran down the ridge into the forest and the guard didn’t even bother chasing me.”

As he got down into the suburbs he found the nearest main road and hitchhiked with a “French” guy to the outskirts of Venice. “I spent around three days in Venice and on the third day went to the Police Station and told them I didn’t have a passport and wanted to apply for asylum.” Eventually he got a hold of the “Chief Police” and received a free train ticket to a refugee camp in Trieste, Italy. He spent one month there and was finally issued political asylum after a “long awaited” interview by the UN commissioner.  However, after finding out  my father was based in the chemical warfare unit during his military duty, the commissioner asked him if he would travel to Munich, Switzerland and speak to some military personnel about that matter. He agreed and ended up being questioned by some “CIA guys” who were very interested in the matter. Apparently, they did not know that a chemical warfare unit existed in Bulgaria and were genuinely disturbed and surprised. “After finally arriving to New York I met my brother and my new life began.”

I have always known about my father’s escape from his home country, however, there were many new details I wasn’t aware of until now. Ever since his escape he has had a certain distrust and hostility towards socialism and everything that it entails. His experience living in a socialist country gave him a unique perspective on the world that has greatly affected his political beliefs. Looking back to his days growing up in Soviet Bulgaria, he believes he is seeing more and more similarities developing today in the United States. 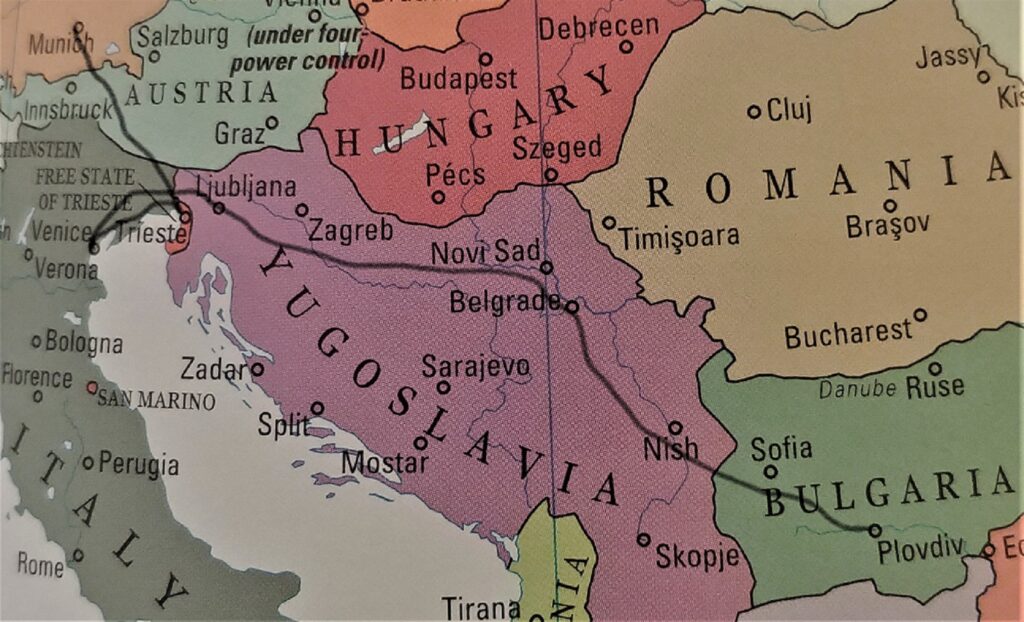 The route taken from Polvdiv, Bulgaria to Munich, Germany.

“Plovdiv – 8000 Years of History in 1000 Words.” Bulgaria Wine Tours, 4 Aug. 2017, https://bulgariawinetours.com/plovdiv-8000-years-of-history-in-1000-words/.
Professor Manning had this to say about Jan Mliakoff’s writing. “Jan had a great detail and a great subject. He could have worked on polish and on developing the conclusion of the paper more. Talked more about why and what made this new story of his father outstanding and interesting to him.”