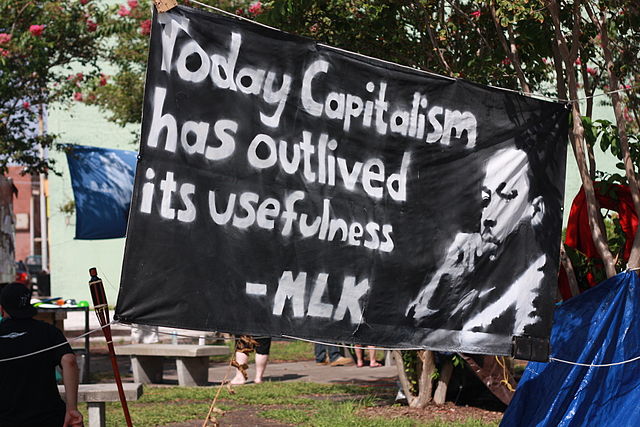 Due to some of the negative consequences of capitalism, some are questioning its principles. Liz Mc – CC BY 2.0 – Wikimedia Commons

Capitalism is the economic system used in the United States, so it is worth reviewing its main components further and examining whether they are reflected within our economy. Recall the five key features of capitalism: private ownership of the means of production, a division between owners and workers, the lack of government intervention, competition and the pursuit of profit. How closely does capitalism, as practiced in the United States, follow these precepts?

Private ownership of the means of production and the division between the owners and the workers have long been seen as hallmarks of capitalism. Private ownership of the land, machines and factories allows the owner to keep the benefits (profits) if the business succeeds, since the owner also takes on the risk of the business failing. Workers sell their labor to the owner in exchange for not being liable if the business fails. However, early critics of capitalism, particularly Karl Marx and Friedrich Engels, stated this system was imminently unfair because the already wealthy and powerful company owners got all of the profits from the labor of their workers. In addition, the act of separating workers from the products they made caused workers to feel estranged from their work (termed alienation by Marx).

Labor unions were formed as a way to protect workers and advocate for their rights. Unions had years of success getting better pay, safer workplaces, shorter work weeks and other benefits for workers, in some small ways shifting the balance of power from employer to worker. However, by 1979, membership and union influence were in decline; current membership hovers at 10.8% of all workers (National Law Review, 2021). In addition to benefits accrued from labor union protections and advocacy, another way the division between workers and owners has shrunk relates to companies going public. When a company goes public, the owner gives up a percentage of their ownership, and shares of the company are sold on the public market. With this, the company ceases to be privately owned and working people can buy stocks, where stocks represent the ownership of fractions of the company. In the U.S., stocks have been sold since the late 1700’s, and by the 1920’s, 10% of U.S. households owned stock (FDIC, 2014). Thanks to benefit packages that include stock options, such as 401(k)s, about 50% of workers now own stock, further blurring the line between owner and worker.

There is also growing support for the government to mandate public and private companies to transfer shares of the company into workers’ collectives, known as employee stock ownership plans (ESOPs), that would guarantee dividends and give workers a say in how the company operates (Burton, 2021). In 2021, there were roughly 6,000 ESOPs in the U.S., covering about 14 million workers (National Center for Employee Ownership, 2021). Table 11.2 “Top 10 employee-owned companies, where at least 50% of the company is owned by an employee stock ownership plan, 2021,” demonstrate the industries where ESOPs are prevalent.

Table 11.2 Top 10 employee-owned companies, where at least 50% of the company is owned by an employee stock ownership plan, 2021

The lack of government intervention is also a distinctive feature of capitalism. Ideally, capitalist economic systems allow the market to determine what is produced and the price of commodities based on the law of supply and demand. For example, electric cars, appreciated for their quiet efficiency over loud and smelly gas engines, were first developed in the 1800’s and popular in the early 1900s, accounting for ⅓ of vehicles on the road at the time (Department of Energy). But competition soon arose as Henry Ford began mass producing the gas-powered Model T car, and inexpensive crude oil was discovered in Texas, making gas-powered cars cheaper to purchase and operate (Department of Energy). As a result, by the mid-1930’s electric vehicles had all but disappeared. Interest in electric cars arose again in the late 1960s and early 1970s due to an energy crisis and the resultant increase in the cost of gasoline. Auto manufacturers responded to this demand by developing and selling electric cars once again. However, because of their limited range and due a drop in gas prices, public interest in electric vehicles once again waned by the early 1980s. As you can see in this example, individuals are able to plan, produce and trade goods without the interference of the state; businesses succeeded or failed based on their ability to meet the needs of the market.

However, this isn’t the end of the story. Response to state- and federal-level regulations related to air pollution, auto emissions and fuel efficiency have helped revive the electric car and drive innovation in the auto industry. In the 1990’s, as a result of these regulations, car manufacturers began retooling popular models into electric vehicles and by 1997, Toyota released the first hybrid Prius. In addition, government employed scientists and engineers, in agencies such as the Energy Department’s National Renewable Energy Lab, have been involved in the improvement of electric vehicles and their batteries. New startups, such as Tesla, have pushed the industry further by producing vehicles that have greater mileage ranges, and have been supported by the U.S. Energy Department’s investment in a nation-wide charging infrastructure (Department of Energy). Thanks to Energy Department innovations in battery development, government loans to auto manufacturers for the development of electric vehicles and private industry innovation and investment, there are a multitude of hybrid, plug-in hybrid and all electric vehicles available today.

As discussed above and in Section 11.3, the U.S. government regularly and significantly intervenes in the economy. From breaking up monopolies, to passing laws to protect employees and the environment, to investing in innovation and introducing regulatory policies, the government affects every aspect of the economy. Several times it has bailed out entire sectors. From airlines to banks to investment institutions to the automotive industry, to nearly every business during the COVID-19 pandemic, government intervention prevented catastrophic failure – even though a free market demands that a business succeed or fail on their own merits.

Competition and the pursuit of profit are the final elemental aspects of capitalism. The ability to sell products for more than they cost to produce is why many find capitalism appealing. At the same time, there will be many companies making the same product, which means they will have to compete with each other to win the customer’s business. Competition benefits the customer since it increases choice and drives down price. Companies that successfully navigate the competition and still make a profit will come out stronger for it. Supposedly. As explained in section 11.3, after the Industrial Revolution the growth of businesses and wealth due to capitalism allowed businesses to incorporate (become corporations). At the time this meant some companies were able to control entire industries, since they accumulated even more wealth – which the government halted with antitrust laws. Corporations did not go away; instead, the dominance of capitalism today is due to the creation of the corporation. In its current iteration, the benefit of incorporation is to separate the business owner from company liabilities; in essence, the business becomes a legal entity to itself. For example, thanks to a Supreme Court ruling, corporations are able to donate money to political campaigns. 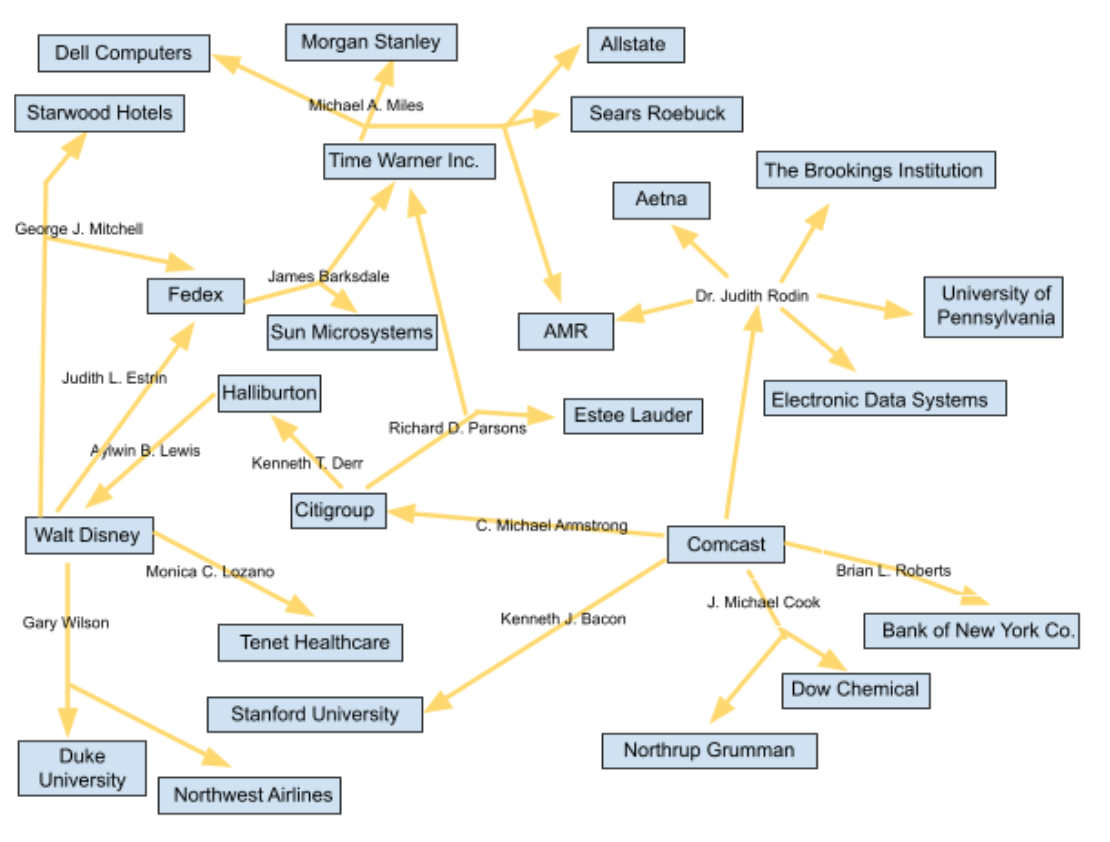 Corporations are usually run by a board of directors and company managers. Though corporations look democratic by electing a board and holding annual stockholder meetings to discuss policy, in reality power is concentrated in the board’s and management’s hands. Members of these boards often sit on several different boards of directors, forming what is known as an , where board members are able to share information, form alliances, and consolidate their considerable power.

Another consequence of corporations was the formation of . This is when the corporation has a home base in one country and divisions in other countries. Walmart, ExxonMobil and Apple are all examples of multinational corporations. This allows corporations to sidestep certain trade agreements and to move operations to countries that offer greater advantages, often to the detriment of the countries where they operate.

In addition, corporations may form conglomerates, where one company owns a number of different businesses. Proctor and Gamble, for example, owns the following brands (among others): Dawn, Ivory, Gain and Joy dishwashing soaps; Aussie, Head & Shoulders, Herbal Essences and Pantene hair care products; Crest toothpaste, Oral-B toothbrushes and Scope mouthwash; Pampers and Luvs diapers; Cheer, Dreft, Gain and Tide laundry detergents; and Old Spice and Secret antiperspirants. Or an oligopoly is formed, where an entire industry is dominated by several large businesses that make slightly different versions of the same product. National media are an example of an oligopoly, as only four corporations own the bulk of U.S. media outlets: Walt Disney, Comcast, Viacom CBS and News Corporation (Hayes, 2021).

These aspects of our contemporary economic system raise concern over the reduction of competition and ultimately, the vitality of capitalism. An additional issue raised is the degree to which political actors can and do remain neutral when they benefit from significant corporate donations and are at the receiving end of lobbying efforts by a multitude of economic industries.

Capitalism is now the dominant economic system in the world, meaning the alterations seen in the U.S. economy are exacerbated by a global market. Just as capitalism concentrates wealth here, it does so globally as well; the top 50 companies in the world now proportionally own 27.6% of the global Gross Domestic Product (Wallach, 2021). Complicating international relationships between countries is the outsize influence businesses have on matters related to the economy, even remotely. We turn now to a look at one of those topics, politics.

Burton, J. (2019, September 21). Workers would get money and voting power under this radical profit-sharing idea. Market Watch. Retrieved from https://www.marketwatch.com/story/forcing-companies-to-share-the-wealth-with-employees-could-save-capitalism-2019-09-13.

Hayes, A. (2021, October 21). What are current examples of oligopolies? Investopedia. Retrieved from https://www.investopedia.com/ask/answers/121514/what-are-some-current-examples-oligopolies.asp.

The history of the Electric Car. (2014).  Energy.gov. Retrieved from https://www.energy.gov/articles/history-electric-car.

Unions by the numbers: 2021 edition. The National Law Review. (2021).  Retrieved from https://www.natlawreview.com/article/unions-numbers-2021-edition

a corporation that has business operations in two or more countries