Many people have experienced intimate partner violence (IPV). Note that while data like this are important to consider and hopefully build awareness around IPV, there are gaps in both reporting and information gathering. For example, less information is known about IPV against transgender people, but analysis of various sources indicate that it is 1.7 times more likely to be committed against transgender people than against cisgender people, as described below. (Centers for Disease Control 2021; Conerly, et. al., 2021).

– or violence committed by a current or former spouse or intimate partner – is a pervasive issue in the United States that shows little sign of abating. Intimates commit violence against each other in many ways: they can hit with their fists, slap with an open hand, throw an object, push or shove, or use or threaten to use a weapon. When all of these acts and others are combined, we find that much intimate violence occurs. While we can never be certain of the exact number of intimates who are attacked, the U.S. Department of Justice estimates from its National Crime Victimization Survey that there were 1.6 million violent victimizations (excluding simple assaults) in 2020 (Morgan and Thompson, 2021). According to the U.S Centers for Disease Control and Prevention, about 11 million women and 5 million men have experienced sexual violence, physical violence and/or stalking by an intimate partner in their lifetime (CDC, 2021). These figures indicate that intimate partner violence is very common and affects millions of people.

Some observers claim that men are just as likely as women to be beaten by a spouse, and there is evidence that mutual violence does occur. Yet this “gender equivalence” argument has been roundly criticized. Although women do commit violence against men, their violence is typically less serious (e.g., a slap compared to using a fist) and often used in self-defense.

Cultural myths also help explain why men hit their wives and girlfriends (Gosselin, 2010). Many men continue to believe that their wives should not only love and honor them but also obey them. If they view their wives in this way, it becomes that much easier to hit them. In another myth many people ask why women do not leave a violent household. The implication is that the violence cannot be that bad because they do not leave home. This reasoning ignores the fact that many women do try to leave home, which often angers their partners and ironically puts the women more at risk for being hit, or they do not leave home because they have nowhere to go (Kim & Gray, 2008). Battered women’s shelters are still few in number and can accommodate a woman and her children for only 2 or 3 weeks. Many battered women also have little money of their own and simply cannot afford to leave home. The belief that battering cannot be that bad if women hit by their husbands do not leave home ignores all of these factors and is thus a myth that reinforces spousal violence against women.

Many college students encounter IPV, as well. Overall, psychological violence seems to be the type of IPV college students face most frequently, followed by physical and/or sexual violence (Cho & Huang, 2017). Of high schoolers who report being in a dating relationship, 10% experience physical violence by a boyfriend or girlfriend, 7% experience forced sexual intercourse, and 11% experience sexual dating violence. Seven percent of women and 4% of men who experience IPV are victimized before age 18 (NCJRS 2017). IPV victimization during young adulthood, including the college years, is likely to lead to continuous victimization in adulthood, possibly throughout a lifetime (Greenman & Matsuda, 2016; Conerly, et. al, 2021). 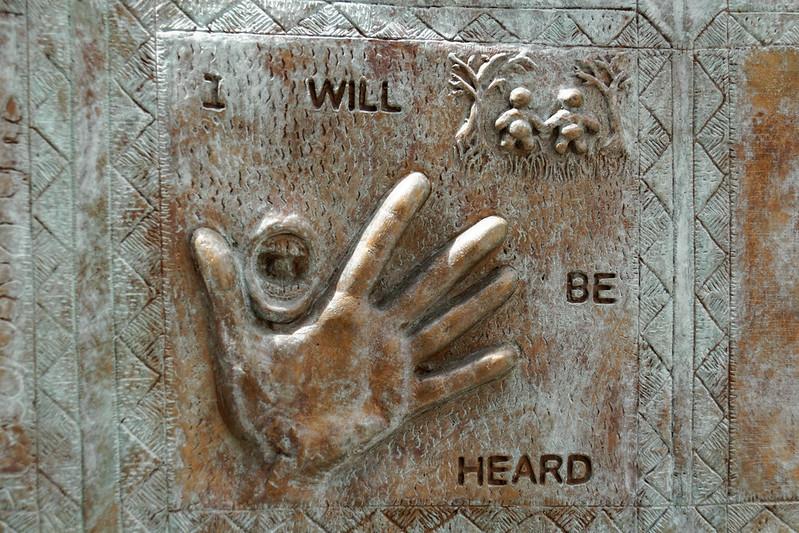 Dr. Michael C. Irving’s monument for child abuse survivors is composed of handprints and messages of people who have been victims of abuse. Harvey K – Attribution 2.0 Generic (CC BY 2.0) – Flickr

One of the hardest behaviors to understand is , which can be physical, psychological or sexual in nature. Children can also suffer from emotional abuse and neglect. It is especially difficult to know how much child abuse occurs. Infants obviously cannot talk, and toddlers and older children who are abused usually do not tell anyone about the abuse. They might not define it as abuse, they might be too scared to tell on their parents, they might blame themselves for being abused, or they might not know whom they could talk to about their abuse. Whatever the reason, they often remain silent, making it very difficult to know the rate of abuse.

Using information from child protective agencies throughout the country, the U.S. Department of Health and Human Services (2021) found in 2019, that over 656,000 children were victims of child abuse and neglect, or 8.9 per every 1000 children. Victimization falls primarily into the category of neglect, with 74.9% of child victims experiencing neglect. Of the remaining child victims, 17.9% were physically abused, 9.3% were sexually abused and 15.5% were victims of two or more types of maltreatment (US Dept of Health and Human Services, 2021). The youngest children are the most vulnerable, as shown below in Table 12.11 “Victims of Child Abuse by Age, 2019.”

Obviously, this is just the tip of the iceberg, as many cases of child abuse never become known. A 1994 Gallup Poll asked adult respondents about physical abuse they suffered as children. Twelve percent said they had been abused (punched, kicked, or choked), yielding an estimate of 23 million adults in the United States who were physically abused as children (Moore, 1994). Some studies estimate that about 25% of girls and 10% of boys are sexually abused at least once before turning 18 (Garbarino, 1989). Whatever the true figure is, most child abuse is committed by parents, stepparents, and other people the children know, not by strangers. In 2019, 91.4% of victims were maltreated by one or both parents (U.S. Department of Health and Human Service, 2021).

Why does child abuse occur? Structurally speaking, children are another powerless group and, as such, are easy targets of violence. Moreover, the best evidence indicates that child abuse is more common in poorer families. The stress these families suffer from their poverty is thought to be a major reason for the child abuse occurring within them (Gosselin, 2010). As with spousal violence, then, economic inequality is partly to blame for child abuse. Cultural values and practices also matter. In a nation where many people think spanking is sometimes necessary to discipline a child, it is inevitable that physical child abuse will occur, because there is a very thin line between a hard spanking and physical abuse. As two family violence scholars once noted, “Although most physical punishment [of children] does not turn into physical abuse, most physical abuse begins as ordinary physical punishment” (Wauchope & Straus, 1990, p. 147). In addition, alcohol and drug abuse by parents are significant risk factors for children.  are what the US Department of Health and Human Services define as “characteristics of a child or caregiver that may increase the likelihood of child maltreatment” (U.S. Department of Health and Human Service, 2021: 23).  For instance, in 2019, 15.9% of child victims of maltreatment were reported with the alcohol abuse child risk factor and 29.4% were reported with the drug abuse child risk factor (U.S. Department of Health and Human Service, 2021).

Child Welfare Information Gateway. (2008). What Is Child Abuse and Neglect. U.S. Department of Health and Human Services. Retrieved from http://www.childwelfare.gov/pubs/factsheets/whatiscan.cfm.

violence committed by a current or former spouse or intimate partner

physical, psychological, or sexual mistreatment of a child, which can include harming a child through neglect