4.1 The Importance of Socialization

The Girl Scouts is a venerable organization, founded in 1912 by Juliette Gordon Low with an emphasis on inclusiveness, the outdoors, service and self-reliance. At a time when women did not yet have the right to vote, members of the Girl Scouts could earn badges as varied as artist, journalist, stargazer and naturalist. However, in the earliest years of the program a significant number of badges revolved around homemaking skills. A girl meeting the requirements could receive a laundress, cook, home nurse or homemaking badge. Using those cooking skills, the scouts held cookie sales almost from the beginning, first selling their homemade sugar cookies door to door to fund troop functions.

The Girl Scouts organization adapted to the times in subsequent years. During the Depression and war years, they held food drives, grew vegetables and offered a bicycle courier service; in the 1960’s its progressive policies addressed issues of racial inequality, and in 1972 elected their first African American national board president. At the same time, while badges could be earned in 1964 for mastering a camera, skating and having a pen pal, there were also badges for outdoor cooking, sewing and housekeeping. Meanwhile, Girl Scout cookies transitioned to a business, where the cookies were made by commercial bakers and the girls selling the officially sanctioned varieties by the box. 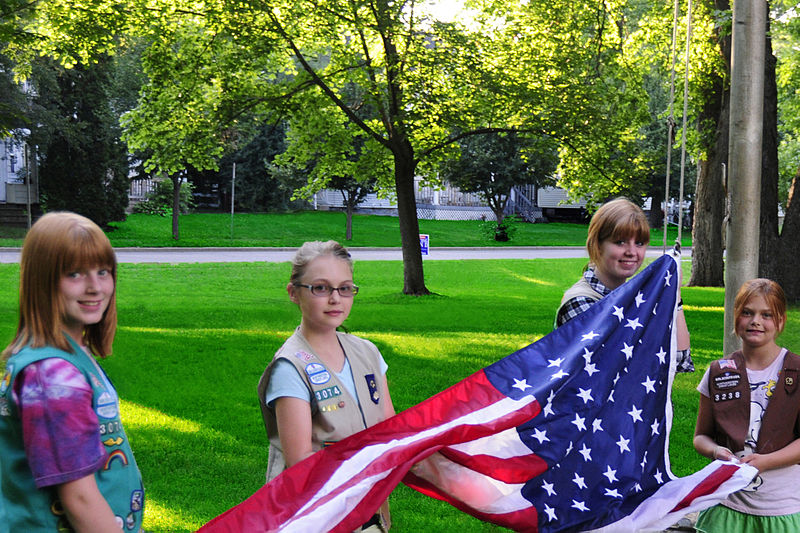 By the 1980’s, Girl Scouts shifted again, tackling important issues such as drug use, child abuse and teenage pregnancy. They emphasized skills that would encourage independence so that, while some traditional badges for skills like sewing remained, girls also learned about staying healthy, traveling, and computers. Today, the organization seeks to promote healthy living by encouraging outdoor activities. But girls can also learn about money management, computer coding, engineering, automotive design, STEM careers, and entrepreneurship – a useful skill for selling Thin Mints, Peanut Butter and Shortbread Cookies, something the Girl Scouts have been doing for over 100 years.

As the history of the Girl Scouts organization illustrates, people learn a great deal from their social environment. What people learn constitutes their culture: norms, values, and symbols. How they learn it is called socialization. Or, more formally, is the process by which people learn their culture. Without socialization we would not learn our culture, and without culture we could not have a society. Socialization, then, is an essential process for any society to be possible.

This chapter examines several aspects of socialization. In so doing, it continues developing the sociological perspective addressed by the previous chapters, as we will again see the ways in which our social environment shapes our thoughts, actions, and life chances.

Developmentally, all babies start the same. It is through socialization that they become Mongolian, Rwandan or American. David Berkowitz – CC BY 2.0, Muhirehussein12 – CC BY-SA 4.0 and  Nabeel Hyatt – CC BY-SA 2.0 – Wikimedia Commons

We have just noted that socialization has to happen in order for society to form. But socialization is important for another reason, too: It is necessary for the development of the individual. Consider the features of your personality, or the stable aspects of what and how you think, feel and do. Perhaps you are the life of the party, or are an excellent mathematician, maybe you are skilled working on computers. You were not born that way, but rather had the potential to do those things. It was through your unique set of experiences as you grew that these aptitudes and abilities were developed, and they were encouraged because your culture sees them as valuable. If you lived in a society that did not use computers, those natural talents would have withered away. Socialization thus explains the similarities seen in people from the same culture and the differences between individuals from that same culture.

To expand on why socialization is critical for individuals, consider what would happen if healthy socialization did not occur. A series of famous experiments by psychologists Harry and Margaret Harlow (1962) demonstrated how a lack of socialization retards social, cognitive and emotional development in monkeys. The Harlow’s studied rhesus monkeys that had been removed from their mothers at birth; some were raised in complete isolation, while others were given fake mothers made of cloth and wire with which to cuddle. Neither group developed normally, although the monkeys cuddling with the fake mothers fared somewhat better than those that were totally isolated. In general, the monkeys were not able to interact later with other monkeys, and female infants abused their young when they became mothers. The longer their isolation, the more the monkeys’ development suffered. By showing the dire effects of social isolation, the Harlow’s experiment reinforced the significance of social interaction for normal development.

As you must have realized, this child would differ dramatically from the average 6-year-old youngster in the United States. The child would look human, but they would not act human. In fact, in many ways they would act more like a frightened animal than like a young human being, and they would be less able than a typical dog to follow orders and obey commands.

One such child, found more than about a half-century ago, was called Anna. She “had been deprived of normal contact and had received a minimum of human care for almost the whole of her first six years of life” (Davis, 1940, p. 554). After being shuttled from one residence to another for her first 5 months, Anna ended up living with her mother in her grandfather’s house and was kept in a small, airless room on the second floor. The grandfather was so dismayed by her out of wedlock birth that he hated seeing her. Because her mother worked all day and would go out at night, Anna was alone almost all the time and lived in filth, often barely alive. Her only food in all those years was milk. When Anna was found at the age of 6, she could not talk or walk or “do anything that showed intelligence” (Davis, 1940, p. 554). She was also extremely undernourished and emaciated. Two years later, she had learned to walk, understand simple commands, could feed herself, and remember faces, but she could not talk and in many respects resembled a 1-year-old infant more than the 8-year-old child she really was. By the time she died of jaundice at about age 9, she had acquired the speech of a 2-year-old.

Shortly after Anna was discovered, another girl, called Isabelle, was found in similar circumstances: born out of wedlock, lived with her mother, kept isolated from the rest of the mother’s family in a dark room, and aged 6. Because her mother was mute, Isabelle did not learn to speak, but importantly she did communicate with her mother via some simple gestures. When she was finally found, she acted like a wild animal around strangers, and in other respects she behaved more like a child of 6 months than one of more than 6 years. When first shown a ball, she stared at it, held it in her hand, and then rubbed an adult’s face with it. Intense training afterward helped Isabelle recover, and 2 years later she had reached a normal speaking level for a child her age (Davis, 1940). The key differences between Anna and Isabelle were that Isabelle was not left alone and did learn rudimentary language.

However, simply the presence of other people is not sufficient for proper growth; infants require stimulation and interaction in order to develop intellectually. This fact was tragically demonstrated in the 1989 case of 170,000 Romanian children raised in the country’s impoverished orphanages, found after the dictator Nicolai Ceausescu was overthrown. Though fed, diapered and bathed on a set schedule, most of the time the children were left alone in their cribs. Observers were surprised how silent the orphanages were, probably due to the children learning that crying made no difference in how they were treated. With nothing to look at in their surroundings, the children could only stimulate themselves by looking at their own hands. Researchers hoping to learn the effects of this form of institutionalized neglect studied a group who remained in the orphanage and found profound problems in the months and years that followed (Weir, 2014). The children had delays in cognitive function, motor development and language. There were issues with bonding with others and emergent psychiatric disorders. A separate group of children who were placed in foster care showed improvement, but still lagged behind peers who had not been institutionalized. The key factor was the age the child was when removed from the institution; those removed before the age of 2 showed the most improvement (Nelson, 2014).

These cases of feral and institutionalized children show that extreme isolation—or, to put it another way, lack of socialization—deprives children of the obvious and not-so-obvious qualities that make them human and in other respects retards their social, cognitive and emotional development.