is an economic system in which the means of production are privately owned. By means of production, we mean everything—land, tools, technology, and so forth—that is needed to produce goods and services. As outlined by famed Scottish philosopher Adam Smith (1723–1790), widely considered the founder of modern economics, the most important goal of capitalism is the pursuit of personal profit (Smith, 1776/1910). As individuals seek to maximize their own wealth, society as a whole is said to benefit. Goods get produced, services are rendered, people pay for the goods and services they need and desire, and the economy and society as a whole prosper. 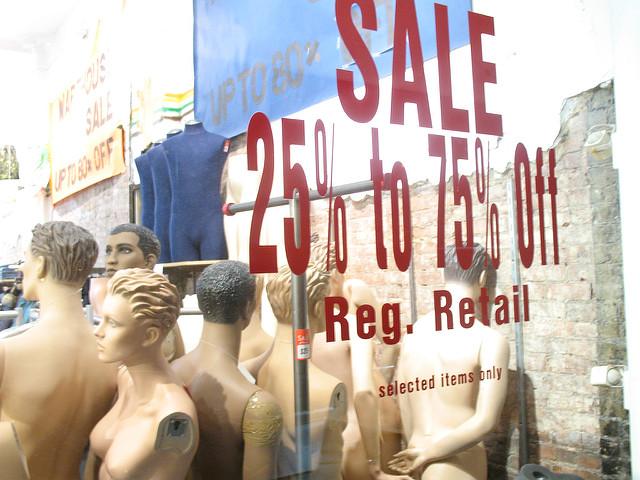 One important hallmark of capitalism is competition for profit. This competition is thought to help ensure the best products at the lowest prices, as companies will ordinarily try to keep their prices as low as possible to attract buyers and maximize their sales. Consumerist Dot Com – sale window – CC BY 2.0.

As people pursue personal profit under capitalism, they compete with each other for the greatest profits. Businesses try to attract more demand for their products in many ways, including lowering prices, creating better products, and advertising how wonderful their products are. In capitalist theory, such competition helps ensure the best products at the lowest prices, again benefiting society as a whole. Such competition also helps ensure that no single party controls an entire market. According to Smith, the competition that characterizes capitalism should be left to operate on its own, free of government intervention or control. For this reason, capitalism is often referred to as , and terms to describe capitalism include the free-enterprise system and the free market.

The hallmarks of capitalism, then, are private ownership of the means of production, the pursuit of profit, competition for profit, and the lack of government intervention in this competition.

The features of socialism are the opposite of those just listed for capitalism and were spelled out most famously by Karl Marx. is an economic system in which the means of production are collectively owned, usually by the government. Whereas the United States has several airlines that are owned by airline corporations, a socialist society might have one government-owned airline. The most important goal of socialism is not the pursuit of personal profit but rather work for the collective good: the needs of society are considered more important than the needs of the individual. Because of this view, individuals do not compete with each other for profit; instead they work together for the good of everyone. If under capitalism the government is supposed to let the economy alone, under socialism the government controls the economy.

The ideal outcome of socialism, said Marx, would be a truly classless or communist society. In such a society all members are equal, and stratification does not exist. Obviously, Marx’s vision of a communist society was never fulfilled, and nations that called themselves communist departed drastically from his vision of communism.

Recall that societies can be ranked on a continuum ranging from mostly capitalist to mostly socialist. At one end of the continuum, we have societies characterized by a relatively free market, and at the other end we have those characterized by strict government regulation of the economy. Capitalist nations are found primarily in North America and Western Europe but also exist in other parts of the world.

People have debated the relative merits of capitalism and socialism at least since the time of Marx (Bowles, 2007; Cohen, 2009). Compared to socialism, capitalism seems to have several advantages. It produces greater economic growth and productivity, at least in part because it provides more incentives (i.e., profit) for economic innovation. It also is often characterized by greater political freedom in the form of civil rights and liberties. As an economic system, capitalism seems to lend itself to personal freedom: because its hallmarks include the private ownership of the means of production and the individual pursuit of profit, there is much more emphasis in capitalist societies on the needs and desires of the individual and less emphasis on the need for government intervention in economic and social affairs.

Yet capitalism also has its drawbacks. There is much more economic inequality in capitalism than in socialism. Although capitalism produces economic growth, not all segments of capitalism share this growth equally, and there is a much greater difference between the rich and poor than under socialism. People can become very rich in capitalist nations, but they can also remain quite poor. Several Western European nations that are more socialist than the United States have fewer extremes of wealth and poverty and take better care of their poor.

Another possible drawback depends on whether you prefer competition or cooperation. Important values in the United States include competition and individualism, both of which arguably reflect this nation’s capitalist system. Children in the United States are raised with more of an individual orientation than children in socialist societies, who learn that the needs of their society are more important than the needs of the individual. Whereas U.S. children learn to compete with each other for good grades, success in sports, and other goals, children in socialist societies learn to cooperate to achieve tasks.

More generally, capitalism is said by its critics to encourage selfish and even greedy behavior: if individuals try to maximize their profit, they do so at the expense of others. In competition, someone has to lose. A company’s ultimate aim, and one that is generally lauded, is to maximize its profits by driving another company out of the market altogether. If so, that company succeeds even if some other party is hurting. The small Mom-and-Pop grocery stores, drugstores, and hardware stores are almost a thing of the past, as big-box stores open their doors and drive their competition out of business. To its critics, then, capitalism encourages harmful behavior. Yet it is precisely this type of behavior that is taught in business schools.

As capitalists began to dominate the economies of many countries during the Industrial Revolution, the rapid growth of businesses and their tremendous profitability gave some owners the capital they needed to create enormous corporations that could monopolize an entire industry. Many companies controlled all aspects of the production cycle for their industry, from the raw materials, to the production, to the stores in which they were sold. These companies were able to use their wealth to buy out or stifle any competition.

In the United States, the predatory tactics used by these large caused the government to take action. Starting in the late 1800s, the government passed a series of laws that broke up monopolies and regulated how key industries—such as transportation, steel production, and oil and gas exploration and refining—could conduct business.

The United States is considered a capitalist country. However, the U.S. government has a great deal of influence on private companies through the laws it passes and the regulations enforced by government agencies. Through taxes, regulations on wages, guidelines to protect worker safety and the environment, plus financial rules for banks and investment firms, the government exerts a certain amount of control over how all companies do business. State and federal governments also own, operate, or control large parts of certain industries, such as the post office, schools, hospitals, highways and railroads, and many water, sewer, and power utilities. Debate over the extent to which the government should be involved in the economy remains an issue of contention today. Some criticize such involvements as socialism, while others believe intervention is necessary to protect the rights of workers and the well-being of the general population. (OpenStax, Sociology 2e, Attribution International (CC BY 4.0); download for free at http://cnx.org/contents/02040312-72c8-441e-a685-20e9333f3e1d@10.1).

Some nations combine elements of both capitalism and socialism and are called . In these nations, which include Denmark, Sweden, Norway and several other Western European nations, the government owns several important industries, but much property remains in private hands, and political freedom is widespread. The government in these nations has extensive programs to help the poor and other people in need. Although these nations have high tax rates to help finance their social programs, their experience indicates it is very possible to combine the best features of capitalism and socialism while avoiding their faults (see the “Learning From Other Societies” box below).

Capitalism — an economic system in which there is private ownership of the means of production, the pursuit of profit, competition for profit, and the lack of government intervention in the market (which determines prices).

Social Democracies — Nations that combine elements of both capitalism and socialism.

Division of labor – a specialization of work that was a consequence of industrialization.

Laissez-faire capitalism – a capitalist economic system in which there is absolutely no government intervention (laissez-faire “means leave is alone” or “hands off” in French).

Monopolies – the total (or almost) control of the supply or trade of a good or service.

Socialism — an economic system in which the means of production are publicly owned, it is not motivated by profit, and the government (or a central planning committee) sets prices.

an economic system in which there is private ownership of the means of production, the pursuit of profit, competition for profit, and the lack of government intervention in the market (which determines prices)

an economic system in which the means of production are publicly owned, it is not motivated by profit, and the government (or a central planning committee) sets prices