Some people live in settings where their lives are so controlled that their values and beliefs change drastically. This change is so drastic, in fact, that these people are in effect resocialized. Such occurs in what Erving Goffman (1961) called . As their name implies, these institutions have total control over the lives of the people who live in them. 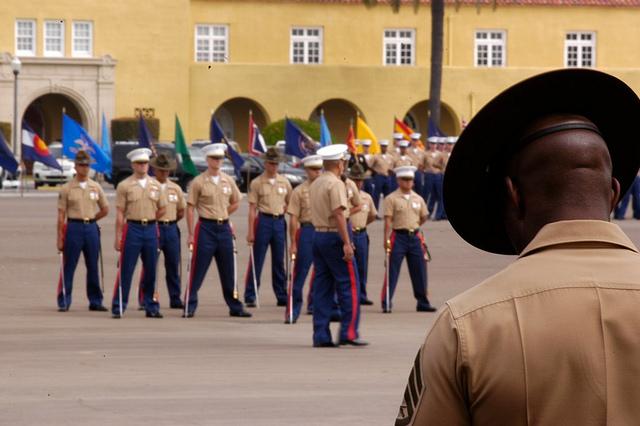 Several types of total institutions exist: psychiatric hospitals, Nazi concentration camps, military boot camps, convents, and monasteries. Some scholars would also say that criminal prisons are total institutions, as they exhibit some of the same processes found in the other types. As this list implies, total institutions can be used for good or bad purposes, and so can resocialization.

Whether we are talking about total institutions that are good or bad, they all share certain processes and procedures that make them total institutions. The most important characteristic is that they have total control over the lives of their inmates, patients, or whatever the people who live in them are called. These residents, to use a generic term, have no freedom or autonomy. They are told what to do and when to do it, and punishment for rule infraction can be quite severe. In Nazi concentration camps, punishment was torture or death; in religious cloisters, it may be banishment; in boot camp, it may be a court-martial; in mental asylums, it may be solitary confinement in a straitjacket.

Second, total institutions take away the identity of their residents in an effort to weaken their self-identity and ensure conformity to the institutions’ rules. Their residents typically wear uniforms and often have their heads shaved and, depending on the institution, may be known by a number or a new name. These procedures make everyone look more similar to each other than they otherwise would and help weaken the residents’ self-identity. Whether these outcomes are good or bad depends again on which total institution we have in mind.

Third, total institutions subject their residents to harsh treatment and, quite often, abuse, although the nature of this abuse, and whether it occurs at all, obviously depends on which total institution we have in mind. Nazis starved concentration camp inmates, tortured them, stripped them naked, conducted hideous experiments on them, and, of course, exterminated millions (Gigliotti & Lang, 2005). Literature on mental asylums is filled with examples of abuses of the patients living there (Goffman, 1961). Drill sergeants have also been known for harshly treating new recruits: some observers defend this practice as necessary for military discipline and readiness, while others consider it to be unjustified abuse.

Resocialization is often accompanied by a , an encounter in which a total institution’s resident is humiliated, often in front of the institution’s other residents or officials (Goffman, 1961). A drill sergeant may call a physically unconditioned male recruit a “girl” or “lady” and question his manhood in front of other recruits. In a mental asylum or prison, an inmate may be stripped naked and checked in their private areas for lice and other vermin. Shaving the heads of new military recruits or prison inmates is another example of a degradation ceremony.

Resocialization also occurs in groups that are not in institutional settings. Alcoholics Anonymous is one such group, as it tries to change the alcoholics’ value system by having them internalize several principles about how to live one’s life. The goal here, of course, is to have the alcoholic stop drinking and to continue to refrain from drinking (Davis & Jansen, 1998). Some religious cults also resocialize their members and continue to spark much controversy due to their brainwashing techniques and level of control exerted over members (Cowan & Bromley, 2008).

Degradation ceremony – a ceremony, ritual or encounter in which a total institution’s resident is humiliated, often in front of the institution’s other residents or officials.

Total institutions — institutions that have total control over the lives of the people who live in them (e.g., prison, boot camps, etc.).

organizations that have total control over the lives of the people who live in them (e.g., prison, boot camps, convents, etc.)

a ceremony, ritual or encounter in which a total institution’s resident is humiliated, often in front of the institution’s other residents or officials