3.1 The Importance of Socialization

“Lessons from Charlie Howard’s Death,” the headline of the op-ed column said. On July 7, 2009, Bangor, Maine, marked the 25th anniversary of the death of Charlie Howard, an openly gay, 23-year-old man who was beaten and thrown off a bridge into a river by three teenagers on July 7, 1984. Howard could not swim and drowned. His three assailants eventually pleaded guilty to manslaughter and were sentenced to a juvenile correction center. One of the lessons of his death, wrote the columnist, a theology professor, is the need to challenge the hateful mindset that underlies homophobia. “The three youth who killed Charlie Howard were not social rebels acting out against societal norms and values,” he wrote, but instead “were social conformists who thought they would be rewarded for acting in conformity to this community’s norms. In fact, when the three boys returned to Bangor High School, they were cheered as heroes by their peers and some adults.” (Ellison, 2009)

Why did three teenagers in a small town beat a gay man and hurl him to his death a quarter-century ago? We may never know, but it seems obvious that they had learned to hate gays from community norms back then and perhaps also from some of the many people with whom they interacted every day. This was not the first hate crime against a gay man or other individual, nor was it the last, but it nonetheless illustrates one of the ugly aspects of the many things we learn from our culture and from the people around us. We learn many good things, all necessary to have a society, but we can also learn to accept some very harmful beliefs and to practice very harmful behaviors.

The stories of Sarah Patton Boyle and Lillian Smith illustrate this all too well. Sarah Patton Boyle was born in 1906 to one of the leading families of Virginia. A great-grandfather had been a prominent attorney and acting governor of the state; both her grandfathers led illustrious military careers; her father was a respected Episcopalian minister. She was raised on the plantation on which her ancestors had once owned slaves, and her family employed several African American servants.

It was in this setting that little Sarah learned to be racially prejudiced. She was forbidden to visit the servants’ rooms, which, she was told, were filthy and ridden with disease. The servants themselves were not allowed to use the family’s bathroom or china, lest they spread disease from the germs they were assumed to harbor. Sarah’s mother loved her servants the same way she loved the family’s pets, “without the slightest feeling that they were much like herself,” and taught Sarah that African Americans “belonged to a lower order of man than we” (Boyle, 1962, p. 14). When Sarah turned 12, she was told to stop playing with the servants’ children because she was now too old to be “familiar” with black youngsters, and she then endured a “dreadful training period” in which she was scolded if she forgot her new, standoffish role. She was socialized during the next few years to treat whites better than blacks. When Sarah’s adolescence ended, she was “as close to a typical Southern lady as anyone ever is to a typical anything” (Boyle, 1962, pp. 14, 29). Her racial views stayed with her for many years. 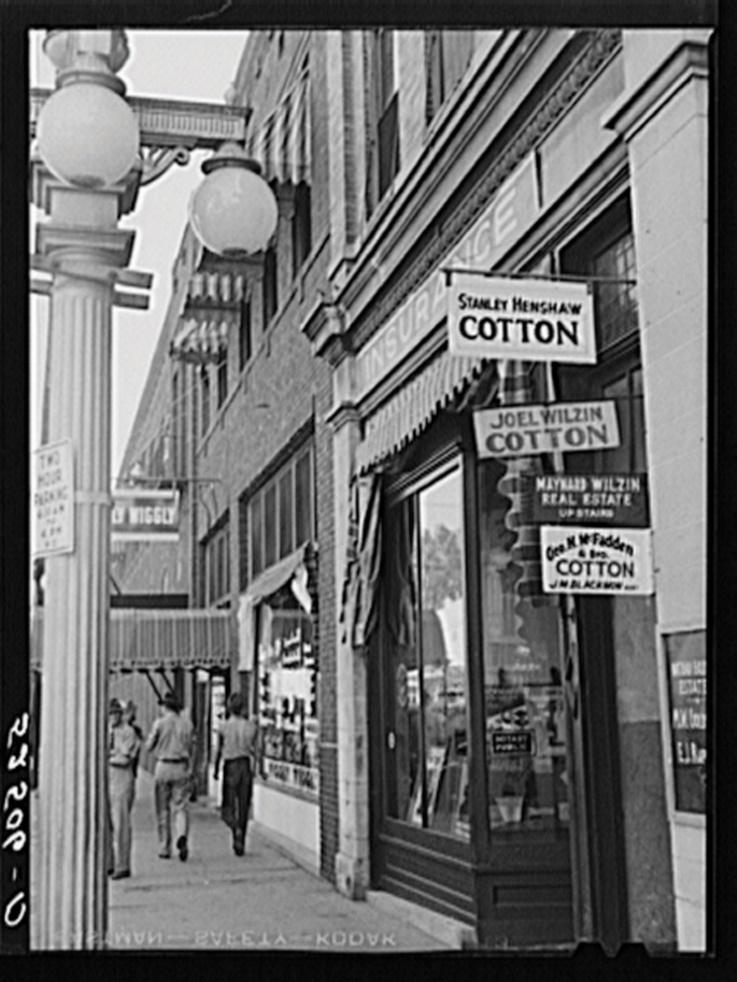 Whites like Sarah Patton Boyle and Lillian Smith, who grew up in the South before the 1960s civil rights movement, learned to be racially prejudiced toward African Americans. U.S. Library of Congress – public domain.

Lillian Smith learned similar beliefs after her birth, a few years before Sarah’s, to a wealthy family in Florida. She learned about taboos and manners in race relations just as she learned her games, prayers, and other childhood practices. A central lesson was that “I was better than a Negro, that all black folks have their place and must be kept in it…that a terrifying disaster would befall the South if ever I treated a Negro as my social equal” (Smith, 1949, p. 17). Her parents played a prime role in this learning process: “The mother who taught me what I know of tenderness and love and compassion taught me also the bleak rituals of keeping Negroes in their place. The father who reminded me that ‘all men are brothers,’ trained me in the steel-rigid decorums I must demand of every colored male. They taught me also to split my conscience from my acts and Christianity from Southern tradition” (Smith, 1949, pp. 17–18). These racial views also stayed with her for many years.

Thanks to the civil rights movement, the South is much different, of course, from when Sarah Patton Boyle and Lillian Smith were growing up, but their poignant descriptions and Charlie Howard’s death remind us that children and adolescents learn all sorts of things, good or bad, without formal instruction. They learn these things from their parents, their friends, and other parts of their social environment. The things they learn constitute their culture: norms, values, and symbols. is the term sociologists use to describe the process by which people learn their culture. Socialization occurs in societies big and small, simple and complex, preindustrial and industrial. It happens in the United States, in Brazil, in Saudi Arabia, and in Indonesia. Without socialization we would not learn our culture, and, without culture we could not have a society. Socialization, then, is an essential process for any society to be possible.

This chapter examines several aspects of socialization. In so doing, it continues developing the sociological perspective addressed by the previous chapters, as we will again see the ways in which our social environment shapes our thoughts, actions, and life chances.

We have just noted that socialization is how culture is learned, but socialization is also important for another important reason. To illustrate this importance, let’s pretend we find a 6-year-old child who has had almost no human contact since birth. After the child was born, her mother changed her diapers and fed her a minimal diet but otherwise did not interact with her. The child was left alone all day and night for years and never went outside. We now find her at the age of 6. How will her behavior and actions differ from those of the average 6-year-old? Take a moment and write down all the differences you would find.

One of the most famous feral children was Victor of Aveyron, who was found wandering in the woods in southern France in 1797. He then escaped custody but emerged from the woods in 1800. Victor was thought to be about age 12 and to have been abandoned some years earlier by his parents; he was unable to speak and acted much more like a wild animal than a human child. Victor first lived in an institution and then in a private home. He never learned to speak, and his cognitive and social development eventually was no better than a toddler’s when he finally died at about age 40 (Lane, 1976). 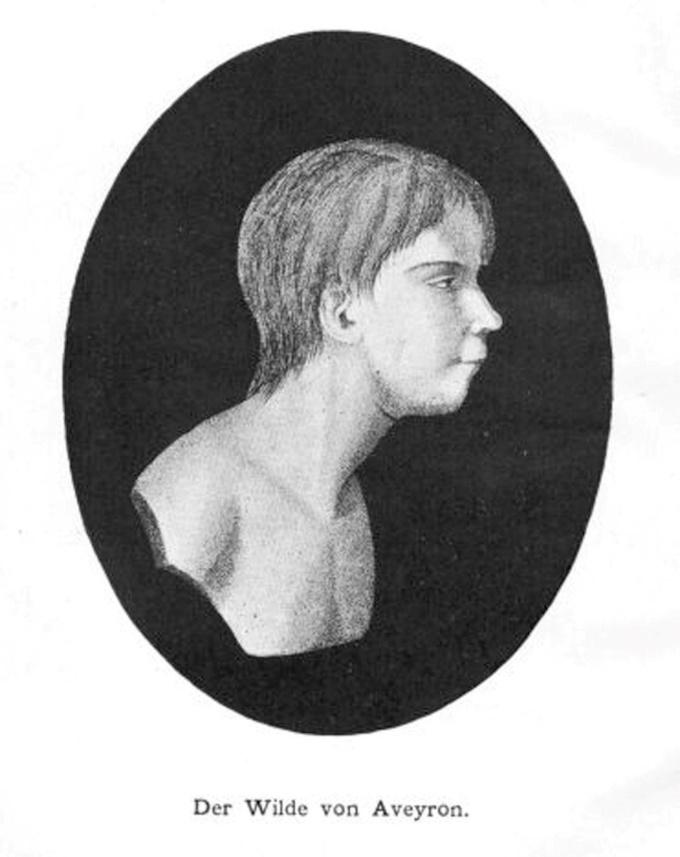 In rare cases, children have grown up in extreme isolation and end up lacking several qualities that make them fully human. This is a drawing of Victor of Aveyron, who emerged from the woods in southern France in 1800 after apparently being abandoned by his parents some years earlier. He could not speak, and his cognitive and social skills never advanced beyond those of a small child before he died at the age of 40. Wikimedia Commons – public domain.

Another such child, found more than about a half-century ago, was called Anna, who “had been deprived of normal contact and had received a minimum of human care for almost the whole of her first six years of life” (Davis, 1940, p. 554). After being shuttled from one residence to another for her first 5 months, Anna ended up living with her mother in her grandfather’s house and was kept in a small, airless room on the second floor because the grandfather was so dismayed by her birth out of wedlock that he hated seeing her. Because her mother worked all day and would go out at night, Anna was alone almost all the time and lived in filth, often barely alive. Her only food in all those years was milk. When Anna was found at the age of 6, she could not talk or walk or “do anything that showed intelligence” (Davis, 1940, p. 554). She was also extremely undernourished and emaciated. Two years later, she had learned to walk, understand simple commands, feed herself, and remember faces, but she could not talk and in these respects resembled a 1-year-old infant more than the 7-year-old child she really was. By the time she died of jaundice at about age 9, she had acquired the speech of a 2-year-old.

Shortly after Anna was discovered, another girl, called Isabelle, was found in similar circumstances at age 6. She was also born out of wedlock and lived alone with her mother in a dark room isolated from the rest of the mother’s family. Because her mother was mute, Isabelle did not learn to speak, although she did communicate with her mother via some simple gestures. When she was finally found, she acted like a wild animal around strangers, and in other respects she behaved more like a child of 6 months than one of more than 6 years. When first shown a ball, she stared at it, held it in her hand, and then rubbed an adult’s face with it. Intense training afterward helped Isabelle recover, and 2 years later she had reached a normal speaking level for a child her age (Davis, 1940).

These cases of feral children show that extreme isolation—or, to put it another way, lack of socialization—deprives children of the obvious and not-so-obvious qualities that make them human and in other respects retards their social, cognitive, and emotional development. A series of famous experiments by psychologists Harry and Margaret Harlow (1962) reinforced the latter point by showing it to be true of monkeys as well. The Harlow’s studied rhesus monkeys that had been removed from their mothers at birth; some were raised in complete isolation, while others were given fake mothers made of cloth and wire with which to cuddle. Neither group developed normally, although the monkeys cuddling with the fake mothers fared somewhat better than those that were totally isolated. In general, the monkeys were not able to interact later with other monkeys, and female infants abused their young when they became mothers. The longer their isolation, the more the monkeys’ development suffered. By showing the dire effects of social isolation, the Harlow’s experiment reinforced the significance of social interaction for normal development. Combined with the tragic examples of feral children, their experiments remind us of the critical importance of socialization and social interaction for human society.

Socialization — the process by which people learn their culture.