Usually prejudice and discrimination go hand-in-hand, but Robert Merton (1949) stressed that this is not always the case. Sometimes we can be prejudiced and not discriminate, and sometimes we might not be prejudiced and still discriminate. Table 9.1 “The Relationship Between Prejudice and Discrimination” illustrates his perspective. The top-left cell and bottom-right cells consist of people who behave in ways we would normally expect. The top-left one consists of “active bigots,” in Merton’s terminology, people who are both prejudiced and discriminatory. An example of such a person is the white owner of an apartment building who dislikes people of color and refuses to rent to them. The bottom-right cell consists of “all-weather liberals,” as Merton called them, people who are neither prejudiced nor discriminatory. An example would be someone who holds no stereotypes about the various racial and ethnic groups and treats everyone the same regardless of her/his background.

Table 9.1 The Relationship Between Prejudice and Discrimination

The remaining two cells of the table are the more unexpected ones. On the bottom left, we see people who are prejudiced but who nonetheless do not discriminate; Merton called them “timid bigots.” An example would be white restaurant owners who do not like people of color but still serve them anyway because they want their business or are afraid of being sued if they do not serve them. At the top right, we see “fair-weather liberals”: people who are not prejudiced but who still discriminate. An example would be white store owners in the South during the segregation era who thought it was wrong to treat blacks worse than whites but who still refused to sell to them because they were afraid of losing white customers.

The discussion so far has centered on , or discrimination that individuals practice in their daily lives, usually because they are prejudiced but sometimes even if they are not prejudiced. Examples of individual discrimination abound today. Joe Feagin (1991), a former president of the American Sociological Association, documented such discrimination when he interviewed middle-class African Americans about their experiences. Many of the people he interviewed said they had been refused service, or at least received poor service, in stores or restaurants. Others said they had been harassed by the police, and even put in fear of their lives, just for being black. Feagin concluded that these examples are not just isolated incidents but rather reflect the larger racism that characterizes U.S. society.

Similarly, much individual discrimination occurs in the workplace, as sociologist Denise Segura (1992) documented through interviews with Mexican American women working in white-collar jobs at a public university in California. More than 40% of the women said they had encountered workplace discrimination based on their ethnicity and/or gender and they attributed their treatment to stereotypes held by their employers and coworkers.

One particularly insidious form of individual discrimination in hate or bias crime. In 2016, there were 6,063 single-bias hate crimes committed in the U.S. (FBI, 2017). Of these hate crimes, the majority were motivated by race/ethnicity/ancestry bias. Figure 9.3 “Hate Crimes in the U.S., Single-Bias Incidents, 2016” demonstrates the different groups targeted in such crimes. 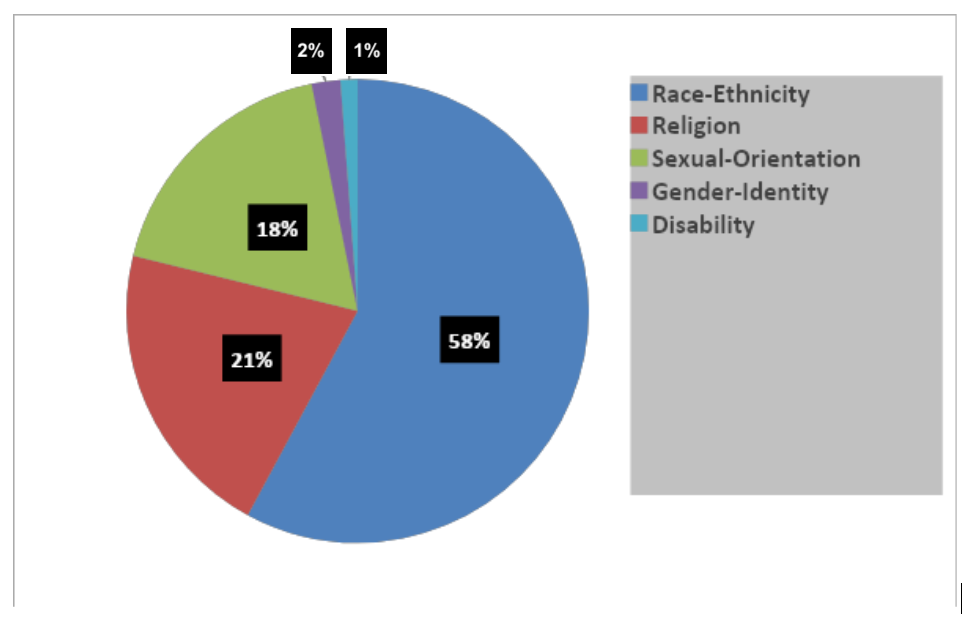 Source: Data from Federal Bureau of Investigations. Retrieved from https://ucr.fbi.gov/hate-crime/2016/topic-pages/incidentsandoffenses

Of the 57.5% of hate crimes targeting people due to race-ethnicity, half of these crimes specifically targeted African Americans (FBI, 2017).

Individual discrimination is important to address, as it is consequential in U.S. society today. is discrimination that pervades the practices of whole institutions, such as housing, medical care, law enforcement, employment, and education. This type of discrimination affects large numbers of individuals simply because of their race or ethnicity. Sometimes institutional discrimination is also based on sexual orientation, gender, disability and/or other characteristics.

In the area of race and ethnicity, institutional discrimination often stems from prejudice and is intentional, as was certainly true in the South during the period of segregation. However, just as individuals can discriminate without being prejudiced, so can institutions when they engage in practices that seem to be racially neutral but in fact have a discriminatory effect. Consider height requirements for police. Before the 1970s, police forces around the United States commonly had height requirements, say 5 feet 10 inches. As women began to want to join police forces in the 1970s, many found they were too short. The same was true for people from some racial/ethnic backgrounds, such as Latinos, whose stature is smaller on the average than that of non-Latino whites.

This gender and ethnic difference is not, in and of itself, discriminatory as the law defines the term. The law allows for bona fide (good faith) physical qualifications for a job. As an example, we would all agree that someone has to be able to see to be a school bus driver; sight therefore is a bona fide requirement for this line of work. Thus, even though people who are blind cannot become school bus drivers, the law does not consider such a physical requirement to be discriminatory.

But were the height restrictions for police work in the early 1970s bona fide requirements? Women and members of certain ethnic groups challenged these restrictions in court and won their cases, as it was decided that there was no logical basis for the height restrictions then in effect. The courts concluded that a person did not have to be 5 feet 10 inches to be an effective police officer. In response to these court challenges, police forces lowered their height requirements, opening the door for many more women, Latino men, and others to join police forces (Appier, 1998).

People of color have higher rates of disease and illness than whites. One question that arises is why their health is worse? Do they have poorer diets, less healthy lifestyles, and the like, or do they receive worse medical care because of their higher poverty rates or because of institutional discrimination in the health-care industry?

Several studies use hospital records to investigate whether people of color receive optimal medical care, including coronary bypass surgery, angioplasty, and catheterization. After taking the patients’ medical symptoms and needs into account, these studies find that African Americans are much less likely than whites to receive the procedures just listed, irrespective of their social class status (Smedley, Stith, & Nelson, 2003). In a novel way of studying race and cardiac care, one study performed an experiment in which several hundred doctors viewed videos of African American and white patients, all of whom, unknown to the doctors, were actors. In the videos, each “patient” complained of identical chest pain and other symptoms. The doctors were then asked to indicate whether they thought the patient needed cardiac catheterization. The African American patients were less likely than the white patients to be recommended for this procedure (Schulman et al., 1999).

Why does discrimination like this occur? It is possible, of course, that some doctors are racists and decide that the lives of African Americans are less valuable, but it is far more likely that they have that somehow affect their medical judgments. Regardless of the reason, the result is the same: African Americans are less likely to receive potentially life-saving cardiac procedures simply because of their race. Institutional discrimination in health care, then, is literally a matter of life and death.

When loan officers review mortgage applications, they consider many factors, including the person’s income, employment, and credit history. The law forbids them to consider race and ethnicity. Yet many studies find that African Americans and Latinos are more likely than whites to have their mortgage applications declined (Blank, Venkatachalam, McNeil, & Green, 2005). Because members of these groups tend to be poorer than whites and to have less desirable employment and credit histories, the higher rate of mortgage rejections may be appropriate, albeit unfortunate.

To control for this possibility, researchers take these factors into account and in effect compare whites, African Americans, and Latinos with similar incomes, employment, and credit histories. Some studies are purely statistical, and some involve white, African American, and Latino individuals who independently visit the same mortgage-lending institutions and report similar employment and credit histories. Both types of studies find that African Americans and Latinos are still more likely than whites with similar qualifications to have their mortgage applications rejected (Turner et al., 2002) or to be offered mortgages carrying higher interest rates or less desirable terms.

There is also evidence of banks rejecting mortgage applications for people who wish to live in certain urban, supposedly high-risk neighborhoods, and of insurance companies denying homeowner’s insurance or else charging higher rates for homes in these same neighborhoods. Practices like these that limit access to loans and insurance in certain neighborhoods are called redlining, and they also violate the law (Ezeala-Harrison, Glover, & Shaw-Jackson, 2008). Because the people affected by redlining tend to be people of color, redlining, too, is an example of institutional discrimination. 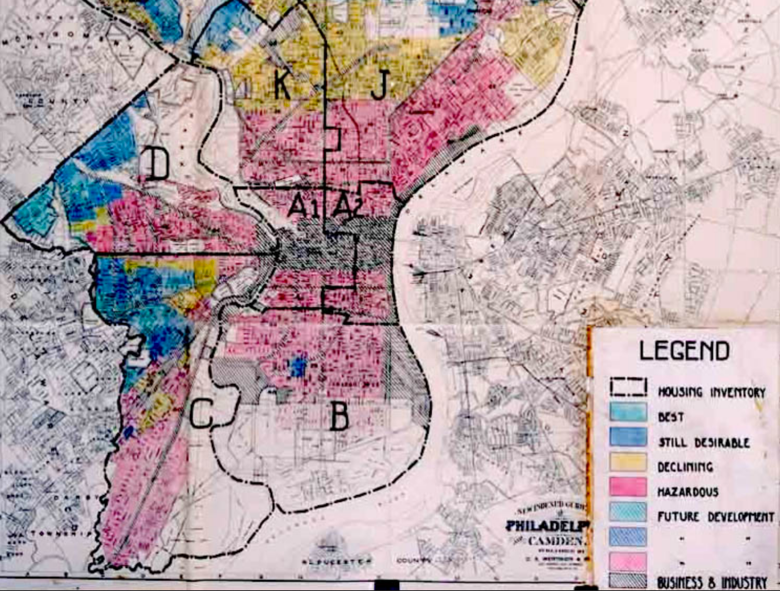 This map from the Home Owners Loan Corporation of Philadelphia is an example of a redlining map, where areas colored red were considered “hazardous” where home loan applications would be denied. Wikimedia Commons – Public Domain

Because of continuing institutional discrimination in housing, African Americans remain highly segregated by residence in many cities, much more so than is true for other people of color. Sociologists Douglas S. Massey and Nancy A. Denton (1993) term this problem and say it is reinforced by a pattern of subtle discrimination by realtors and homeowners that makes it difficult for African Americans to find out about homes in white neighborhoods and to buy them. The hypersegregation that African Americans experience, say Massey and Denton, cuts them off from the larger society, as many rarely leave their immediate neighborhoods, and results in “concentrated poverty,” where joblessness and other related problems are pervasive. Calling residential segregation “American apartheid,” they urge vigorous federal, state, and local action to end this ongoing problem.

Title VII of the federal Civil Rights Act of 1964 banned racial discrimination in employment, including hiring, wages, and firing. Table 9.2 “Median Weekly Earnings of Full-Time Workers, First Quarter, 2018” presents weekly earnings data by race and ethnicity and shows that African Americans and Latinos have much lower earnings than whites and Asians. Several factors explain this disparity, including the various structural obstacles related to poverty. Despite Title VII, however, an additional reason is that African Americans and Latinos continue to face discrimination in hiring and promotion (Hirsh & Cha, 2008).

Discrimination — the arbitrary denial of rights, privileges, and opportunities to members of a minority group.

Institutional Discrimination — discrimination that pervades the practices of whole institutions, such as housing, medical care, law enforcement, employment, and education.

Unconscious (implicit) bias – biases individuals exhibit that are beyond their awareness and based on learned stereotypes that are unintentionally held.

Redlining – the practice of rejecting the mortgage applications of racial-ethnic minorities who wish to live in certain neighborhoods primarily inhabited by members of the same group.

Restrictive Covenants – agreements among property owners that stipulated they would not sell or rent their properties of African Americans.

Continue to 9.5 Patterns of Intergroup Relations

the arbitrary denial of rights, privileges, and opportunities to members of a minority group

discrimination that pervades the practices of whole institutions, such as housing, medical care, law enforcement, employment, and education

the high degree of residential segregation experienced by African Americans