Sociological perspectives on religion aim to understand the functions religion serves, the inequality and other problems it can reinforce and perpetuate, and the role it plays in our daily lives (Emerson, Monahan, & Mirola, 2011). The following “Theory Snapshot” summarizes what these perspectives say.

The Functions of Religion

The comes from the work of Émile Durkheim who stressed the functions that religion serves for society regardless of how it is practiced or of what specific religious beliefs a society favors. Durkheim’s insights continue to influence sociological thinking today on the functions of religion.

First, religion gives meaning and purpose to life. Many things in life are difficult to understand. That was certainly true, as we have seen, in prehistoric times, but even in today’s highly scientific age, much of life and death remains a mystery, and religious faith and belief help many people make sense of the things science cannot tell us.

Second, religion reinforces social unity and stability. This was one of Durkheim’s most important insights. Religion strengthens social stability in at least two ways. First, it gives people a common set of beliefs and thus is an important agent of socialization. Second, the communal practice of religion, as in houses of worship, brings people together physically, facilitates their communication and other social interaction, and thus strengthens their social bonds. 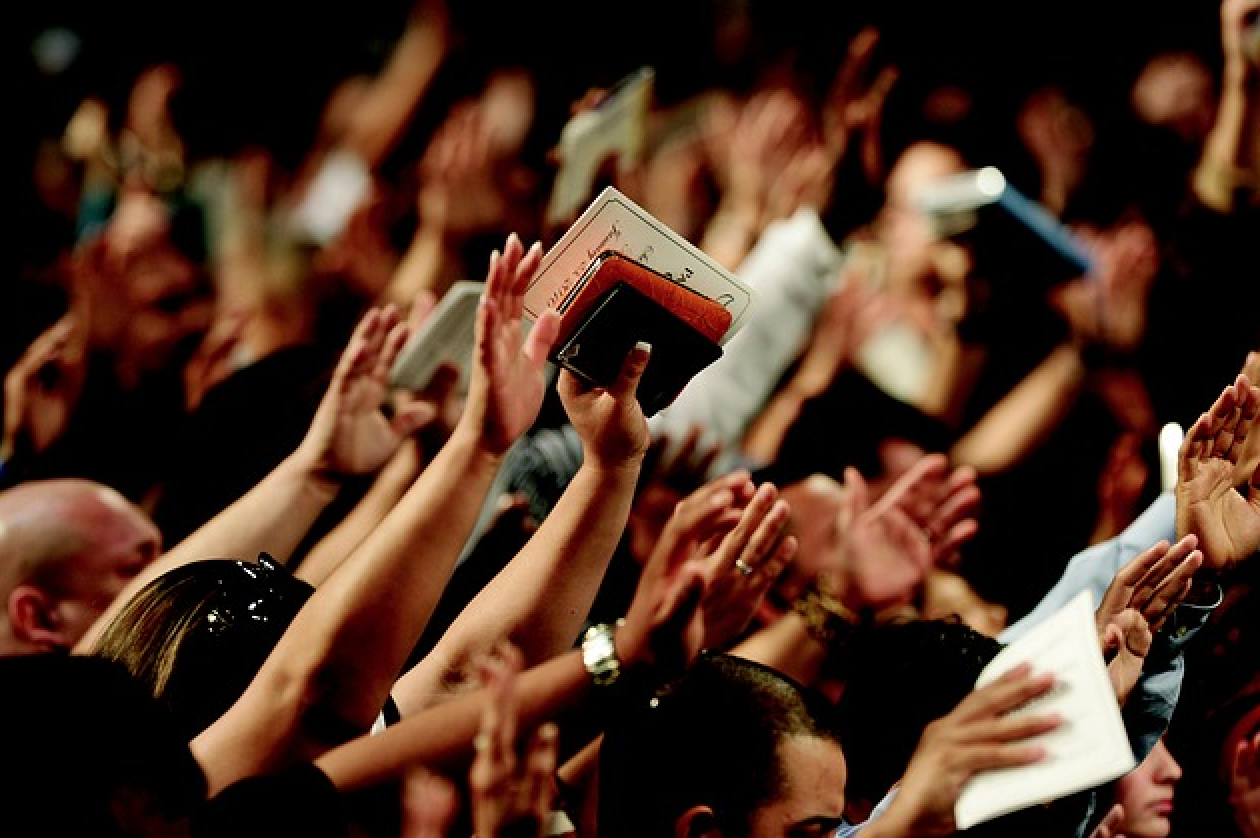 The communal practice of religion in a house of worship brings people together and allows them to interact and communicate. In this way religion helps reinforce social unity and stability. This function of religion was one of Émile Durkheim’s most important insights. Image by J F from Pixabay.

A third function of religion is related to the one just discussed. Religion is an agent of social control and thus strengthens social order. Religion teaches people moral behavior and thus helps them learn how to be good members of society. In the Judeo-Christian tradition, the Ten Commandments are perhaps the most famous set of rules for moral behavior.

A fourth function of religion is greater psychological and physical well-being. Religious faith and practice can enhance psychological well-being by being a source of comfort to people in times of distress and by enhancing their social interaction with others in places of worship. Many studies find that people of all ages, not just the elderly, are happier and more satisfied with their lives if they are religious. Religiosity also apparently promotes better physical health, and some studies even find that religious people tend to live longer than those who are not religious (Moberg, 2008). We return to this function later.

A final function of religion is that it may motivate people to work for positive social change. Religion played a central role in the development of the Southern civil rights movement a few decades ago. Religious beliefs motivated Martin Luther King Jr. and other civil rights activists to risk their lives to desegregate the South. Black churches in the South also served as settings in which the civil rights movement held meetings, recruited new members, and raised money (Morris, 1984).

Religion has all of these benefits, but, according to conflict theory, it can also reinforce and promote social inequality and social conflict. The is partly inspired by the work of Karl Marx, who said that religion was the “opiate of the masses” (Marx, 1964). By this he meant that religion, like a drug, makes people happy with their existing conditions. Marx repeatedly stressed that workers needed to rise up and overthrow the bourgeoisie. To do so, he said, they needed first to recognize that their poverty stemmed from their oppression by the bourgeoisie. But people who are religious, he said, tend to view their poverty in religious terms. They think it is God’s will that they are poor, either because he is testing their faith in him or because they have violated his rules. Many people believe that if they endure their suffering, they will be rewarded in the afterlife. Their religious views lead them not to blame the capitalist class for their poverty and thus not to revolt. For these reasons, said Marx, religion leads the poor to accept their fate and helps maintain the existing system of social inequality.

Religion also promotes gender inequality by presenting negative stereotypes about women and by reinforcing traditional views about their subordination to men (Klassen, 2009). A declaration a decade ago by the Southern Baptist Convention that a wife should “submit herself graciously” to her husband’s leadership reflected traditional religious belief (Gundy-Volf, 1998).

As the Puritans’ persecution of non-Puritans illustrates, religion can also promote social conflict, and the history of the world shows that individual people and whole communities and nations are quite ready to persecute, kill, and go to war over religious differences. We see this today and in the recent past in central Europe, the Middle East, and Northern Ireland. Jews and other religious groups have been persecuted and killed since ancient times. Religion can be the source of social unity and cohesion, but over the centuries it also has led to persecution, torture, and wanton bloodshed.

News reports going back since the 1990s indicate a final problem that religion can cause, and that is sexual abuse, at least in the Catholic Church. As you undoubtedly have heard, an unknown number of children were sexually abused by Catholic priests and deacons in the United States, Canada, and many other nations going back at least to the 1960s. There is much evidence that the Church hierarchy did little or nothing to stop the abuse or to sanction the offenders who were committing it, and that they did not report it to law enforcement agencies. Various divisions of the Church have paid tens of millions of dollars to settle lawsuits. The numbers of priests, deacons, and children involved will almost certainly never be known, but it is estimated that at least 4,400 priests and deacons in the United States, or about 4% of all such officials, have been accused of sexual abuse, although fewer than 2,000 had the allegations against them proven (Terry & Smith, 2006). Given these estimates, the number of children who were abused probably runs into the thousands.

While functional and conflict theories look at the macro aspects of religion and society, the looks at the micro aspects. It examines the role that religion plays in our daily lives and the ways in which we interpret religious experiences. For example, it emphasizes that beliefs and practices are not sacred unless people regard them as such. Once we regard them as sacred, they take on special significance and give meaning to our lives. Symbolic interactionists study the ways in which people practice their faith and interact in houses of worship and other religious settings, and they study how and why religious faith and practice have positive consequences for individual psychological and physical well-being. 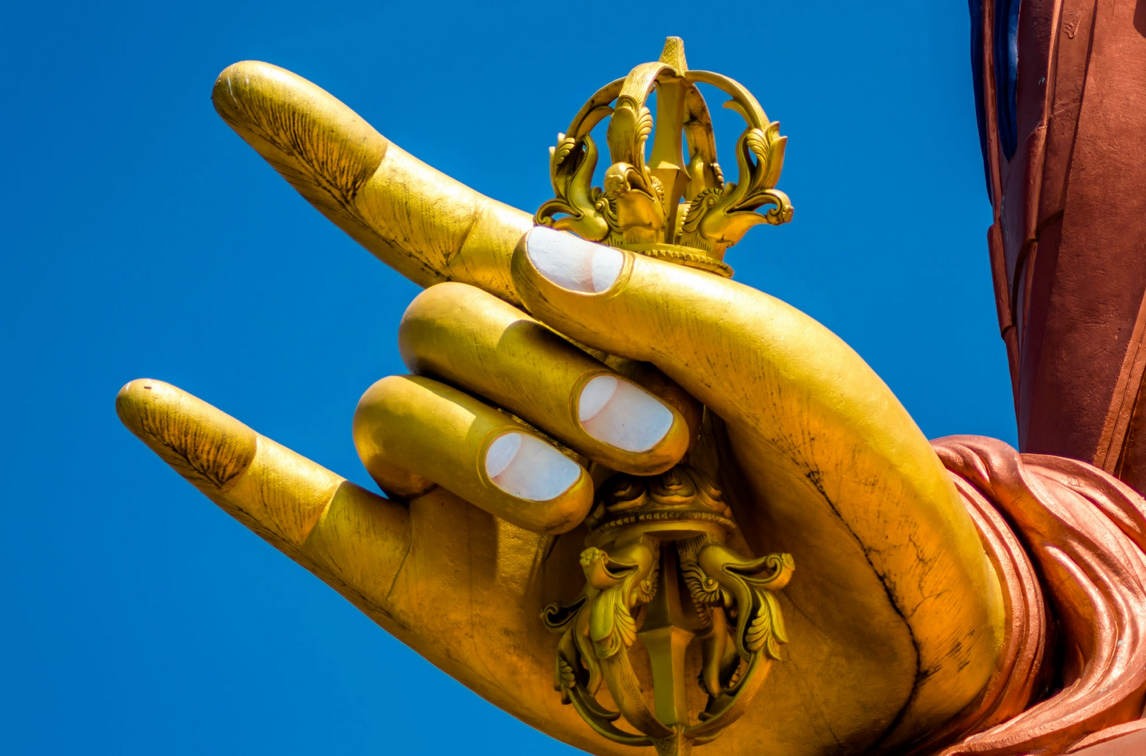 Statues of Buddha typically show different mudras, or hand gestures, each of which has a different meaning. This Mudra serves to expel negative energy and is seen as helping to remove sickness or negative thoughts. Photo by Tenzing Kalsang from Pexels

Religious symbols indicate the value of the symbolic interactionist approach. A crescent moon and a star are just two shapes in the sky, but together they constitute the international symbol of Islam. A cross is merely two lines or bars in the shape of a “t,” but to tens of millions of Christians it is a symbol with deeply religious significance. A Star of David consists of two superimposed triangles in the shape of a six-pointed star, but to Jews around the world it is a sign of their religious faith and a reminder of their history of persecution.

Religious rituals and ceremonies also illustrate the symbolic interactionist approach. They can be deeply intense and can involve crying, laughing, screaming, trancelike conditions, a feeling of oneness with those around you, and other emotional and psychological states. For many people they can be transformative experiences, while for others they are not transformative but are deeply moving nonetheless.

Continue to 13.9 Types of Religious Organizations

religion serves functions for society, including giving meaning and purpose to life, reinforcing social unity and stability, serving as an agent of social control, promoting physical and psychological well-being and motivating people to work for social change